From City Hall to Visitors from Outer Space

On Tiny Wheels Revolve the Turns of Fate
When Eileen Normile and Stan Zimmerman were appointed to fill vacancies on the Sarasota City Commission last fall, conventional wisdom held they’d have the inside track on securing the seats for full four-year terms in elections to be held just six months down the road.

But instead, both were voted out of office last month, victims they say of a media Normile called ‘biased’ and Zimmerman termed ‘pitiful’ in comments published recently in the Herald Tribune.

More likely, it was an anti-incumbent sentiment among voters – this despite the two having been in office barely long enough to find their way around city hall. Also, being ‘chosen’ rather than elected, may have smacked of cronyism in the minds of some voters, especially given the unpopularity of the commission in recent years and the support the two appointees generally showed for the policies advanced by the three elected commissioners.

For all the talk of voters wanting less divisiveness in government, the reality is that more-often than not they choose divided government over one in which one side or the other wields majority power. And in this case, party affiliation seemed less important than whether or not candidates were seen as pro-neighborhood or pro development.

Displaced voter anger aimed at easy targets of opportunity? Perhaps. Especially given that the more appropriate targets for voter dissatisfaction – sitting commissioners Shaw, Chapman and Atwell – were not on the ballot this time around (actually Shaw was, but ran unopposed). That theory is at least as plausible as the ‘biased, pitiful media’ one advanced by the losing candidates – an explanation that carries some interesting irony, given Zimmerman’s and Normile’s shared background as working journalists.

But the real irony for the two short-lived incumbents is that the seeds of their defeat were likely planted in their earlier victory.

Had they been passed over by the commissioners last fall, they would have been the outsiders this time around, and probably would have benefited accordingly.

A Fitting, if Somewhat Unconventional Memorial 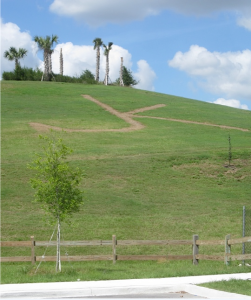 Driving along Palmer Boulevard through the Celery Fields east of town you may have wondered about the giant initials “JK” etched into the side of the hill that serves as the centerpiece of the park. That hill has become a popular attraction for bird watchers and fitness enthusiasts alike, the former using it to gain a ‘birds eye’ view in pursuit of their hobby, the latter attracted to the aerobic workout it offers as they repeatedly run, walk or bike to its summit and careen back down again.

The giant letters appear to be the result of a massive application of ‘Round-Up’ or some similar grass killing herbicide. So what’s the story? Vainglorious teen prank? A Harry Potter fan’s incomplete tribute to author J.K. Rowling?

No. It’s actually a testament to friendship, respect and love for a fallen local soldier, John King, U.S. Air Force, who died as a result of a warehouse accident while serving at Andrews Air Force Base in Maryland in 2013.

Over the recent Memorial Day weekend, park visitors enjoyed the view, ran up and down the hill, flew their kites and rode their bikes, most not knowing the story behind those giant letters nearby.

A fitting, living legacy for King, I’d say. And a reminder to the rest of us enjoying a bright spring day full of promise, that we are only able to do so but for the sacrifice and service of men and women like King.

“The people you choose to work with, to love, those who animate, inspire and energize you will define the quality of your life experience. Do not waste time with people who do not help bring out the best in you.”

And in another commencement address, this one by Admiral William H. McRaven to the class of 2014 at the University of Texas, Austin last May, the former Navy Seal had this advice:

“If you want to change the world, make your bed.”

Laughter rose from the crowd, but, McRaven had a serious point to make.

“I’ve been a Navy Seal for 36 years,” he continued. “But it all began with basic seal training. Seal training is six months of long, tortuous runs in the soft sand, midnight swims in the cold water off San Diego, obstacle courses, unending calisthenics, days without sleep, and always being cold, wet and miserable. It is six months of being constantly harassed by professionally trained warriors.”

“Each morning the instructors would inspect our beds. If you had made it right, the corners would be square, the covers pulled tight, the pillow centered below the headboard and the extra blanket folded neatly at the foot of the rack. It was a simple task. Mundane at best. But every morning we were required to make our beds to perfection. It seemed a little ridiculous to me at the time, considering the fact that we were aspiring to be real warriors. Tough battle hardened seals. But the wisdom of this simple act has been proven to me many times over. If you make your bed every morning, you will have accomplished the first simple task of the day. And it will encourage you to do another task. And another. And another. And by the end of the day, that one task completed will have turned into many.”

“Making your bed will also reinforce that the little things in life matter. If you can’t do the little things right, you’ll never be able to do the big things. And if by chance you have a miserable day, you will come home to a bed that is made. That you made.  And that will help encourage you that tomorrow will be better. So if you want to change the world, start off by making your bed.”

As Predicted, Little Love from County for Transit Proposal
We mentioned in this space last month a proposal from a private transit company, Transdev, to save Manatee and Sarasota County taxpayers upwards of $2 million annually by combining the two systems and operating them in a streamlined manner to increase service while reducing waste. We also suggested the proposal would probably go nowhere fast because it made far too much sense. Sure enough, Sarasota County Administrator Thomas Harmer told the Bradenton Herald recently “We’re not there yet,” adding that the completion of an operational analysis of the county’s transit operations must be finished first. Translation: Don’t call us, we’ll call you.

City Commission Meeting or Trailer for Really Bad Political Intrigue Movie?
We head back to City Hall for this next item. It seems Sarasota Mayor Willie Shaw – like Zimmerman and Normile – is none too pleased with some of the press the commission has been receiving lately. He opened a recent meeting by letting loose with this harangue:

“This commission has faced mockery, slander, conspiracy, treachery, even to the point of extortion, and we did survive.”

ET Calling? Best Not to Answer?
A group of scientists – including noted Physicist and author Stephen Hawking – has broken ranks with the majority in the scientific community by arguing against efforts to beam messages into space in hopes of finding intelligent life. The fear? That if found, such a life form might more closely resemble the one depicted in the film Alien than a benevolent example akin to the namesake star of the movie ET.

A study of earthly life forms might offer some support for this position given the experience of “New World” populations in the 15th and 16th centuries at the hands of technologically ‘advanced’ European explorers.

Hernando De Soto and Hernan Cortez may be memorialized locally, with streets, malls and festivals named after them, but they are not exactly revered among the descendants of the Aztecs, Incas and native tribes of the southwest and southeastern United States whose ancestors were decimated during the Conquistadors’ treks through the Americas.

“Curfew for Cemetery: News at 11:00”
That was the television ‘tease’ for a recent news broadcast. But it took a moment to connect the dots here and realize that the intended target of the new ordinance is the homeless population, not the dear departed full time residents of the Rosemary Cemetery. There are rarely problems with the latter in terms of curfew violations. Except perhaps on Halloween.