Sarasota and Lakeland have much in common. They are both mid-size Florida cities with walk-able, vibrant downtowns. Both have prized natural amenities: beaches and bays here and swan filled lakes in Lakeland. They also both feature respected centers of higher learning: The Ringling School of Art and Design, New College and USF here and Florida Southern University there. And one more thing: both have police Departments that have struggled with morale and accreditation issues lately. Lakeland regained its accreditation recently from CALEA (Commission on Accreditation for Law Enforcement Agencies) after losing it three years prior. Sarasota’s loss is more recent: it was announced just this past month when according to Police Chief Bernadette DiPino it became clear to her that the department would not pass an upcoming re-certification review, leading her to allow accreditation to lapse until an internal review allows for a more confident reapplication down the road.

Here’s where we hope the parallel between the two cities diverges: Lakeland’s loss of certification signaled more bad news to come. Indeed, it was just the first in a series of setbacks for the department. In the period since, LPD has been rocked by a sex scandal involving officers and a civilian worker that extended into questions about the leadership and integrity of the new chief, Lisa Womack (since fired), who, like DiPino, was brought in to right a listing ship. The department also displayed a pattern of not complying with public records laws and most seriously, its officers suffered a loss of credibility that led long-standing State Attorney for the 10th Circuit, Jerry Hill, to take the extraordinary step of refusing to accept testimony from LPD officers in cases his office was prosecuting.

Unfortunately, back in Sarasota, new information reveals a discrepancy between the time line DiPino outlined recently of when she first learned about the department’s certification troubles and one suggested in earlier e-mails and documents. Also, a letter to the editor published in The Herald Tribune on July 19th paints a picture of DiPino as a detached manager, inaccessible to her officers and staff.

Despite praise from many in the community for her high profile public persona, perhaps DiPino should consider focusing a bit less on community barbecues, meet and greet events, and the addition of volunteer police liaisons handing out brochures along Main Street and a bit more on what goes on inside the walls of her own department.

Former Chief Womack of Lakeland might be wishing she had done the same way back when her certification issues first emerged.

The Changing Face of Retail: Selling at the Top?

For 23 years John Krotek sold camping and outdoor equipment from his modest business, Environeers, located near the northeast corner of Fruitville Road and Honore Avenue. But when Krotek accepted a full time position recently with SANCA (Suncoast Aquatic Nature Center Associates) the non-profit running events at the nearby Benderson Park, he and his wife Ann (a partner in the business) decided it was time to sell their long standing labor of love. A buyer was found and the sale of the business was announced earlier this spring. With the recent news that Bass Pro Shops will be opening one of its mega stores just a stones throw east on Fruitville, one might imagine the Kroteks would be thanking their lucky stars for – as Kenny Rogers famously put it – “knowing when to hold ‘em and when to fold ’em.” 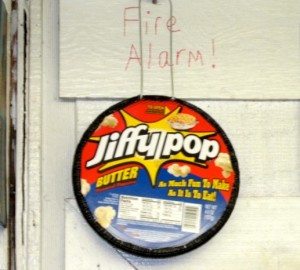 Looking for a simple, easy to install fire alarm? We came across this decidedly low tech model while traveling through the hills and dales of Northern Georgia recently. It was observed on the wall near our table at a roadside BBQ joint. The “Jiffy Pop Deluxe” model can be purchased at any grocery store for just a few bucks. An added benefit: No batteries or electrical wiring required, though I’m guessing it won’t meet local codes. Things are so much easier up in the hills…

Working Out While you Work

Amazon is in the process of completing one of its massive regional order fulfillment centers in nearby Ruskin and has been advertising for the workers needed to staff the facility. “Pickers” and “Packers” as they are known can log up to 15 miles per day walking and jogging through the warehouse as they complete their order filling duties. Starting pay and benefits are above the average for similar positions in the Tampa Bay region, but before rushing out to apply for a job some might view as a way to get paid for keeping fit, consider the view from the inside aired as part of a recent CNBC special, “Amazon Rising.” Some employees complained of the tedium and exhausting pace of their work. In one segment, workers protesting outside a facility similar to the one under construction in Ruskin were shown holding signs with the message “We’re Humans, Not Robots.”

To which anyone familiar with Jeff Bezos’s bottom-line mentality might add:

Conventional wisdom would seem to point to the new University Town Center Mall (UTC) as having its biggest impact on the Westfield Southgate shopping center (soon to be re-branded Westfield Siesta Key) and downtown Sarasota merchants. But the biggest loser may well be DeSoto Square Mall in Bradenton. After attracting no interest from recent sales efforts by the current owners who are trying to unload the aging mall (it debuted in 1973), it was announced the property would now be auctioned. Starting bid? A mere $9 million. Compare that to the cost of the new UTC, which comes in at $318 million and you can see just how far Desoto Square’s star has fallen.

If 20 or 30 years ago you pulled a Rip Van Winkle and fell asleep in front of your TV only to wake up today to the voice of Sarasota’s Sleep King owner Larry Cohen trying to sell you a mattress, “Free same day delivery, even if we have to carry it on our back…” you might be fooled into thinking your nap was of a more traditional variety (and duration). That’s because Cohen’s commercial has been running non-stop and unchanged on local TV since, oh, I don’t know…the Truman administration? Well, maybe not quite that long, but the Reagan administration may not be much of a stretch.

Hey, if it ain’t broke, why fix it, right? Cohen’s strategy would seem to prove the benefits of repetitive advertising though. Sleep King is probably the first name that pops into the head of area consumers in the market for a new mattress. Maybe he should check with the Guinness Book of World Records to see if his classic commercial is some kind of a record setter…

The real Rip Van Winkle shocker might well be seeing Cohen in an updated commercial. I’m sure he’s changed quite a bit from the frozen-in-time image of him beamed into our consciousness over the past 25 or so years.

Are you listening Larry? There may be an idea for a new campaign here…

Summer Showdown with the Silver King