Edwin Rose Jr. was arrested by Pasco county deputies recently for the crime of dancing in the street. Deputies said Rose was blocking traffic at US 19 and Alternate 19 at the time of his arrest. This was the third time Rose has been arrested for his happy-feet routine.

Martha and the Vandellas could not be reached for comment.

While this item isn’t ‘off key’ in a physical sense (since it relates to a Siesta Key issue), it is ‘off-key’ just the same in the sense of a flawed or ‘flat’ performance, like an opera singer who fails to hit the high notes.

The matter concerns the two approaches to the Key: Stickney Point Road and Siesta Drive. After a mere 180 accidents over five years along the section of Siesta Drive extending from Osprey to Higel Avenues, including two fatal crashes this year alone, the Florida Department of Transportation (FDOT) finally decided that perhaps the speed limit should be reduced – from 40 mph to 30 mph – along this narrow stretch, with it’s slim-to-non-existent shoulders, limited sight lines approaching the roadbed’s canal crossing by way of a narrow bridge and the sharp, unforgiving turn at the intersection with Higel.

None of these geographical impediments are new, so why five years to realize that perhaps drivers should tap the brakes in the area? The delay is all the more bewildering given the background behind traffic back-ups along Stickney Point Road a couple of years ago that arose after the FDOT tinkered with the right-on-red rule for traffic turning north onto Midnight Pass Road from Stickney Point Road.

Formerly, the rule in place had allowed vehicles to turn right when no pedestrians were present. But this was changed in favor of right turns on a green arrow only. The resulting traffic back-ups were monumental…often stretching all the way back to US-41 on the mainland.

When asked at the time what prompted the new rule an FDOT spokesperson said the decision followed complaints from pedestrians in the area. When asked how many complaints were received, the spokesperson wouldn’t answer directly, but instead said FDOT takes even a single complaint seriously. The impression was that a single complaint – one not tied to any personal injury or property damage that could be gleaned at the time – would be enough to rollout the new rules that led to weeks of gridlock along the southern approach to the Key before the misguided policy was mercifully put out of our misery.

The ‘off-key’ part of the story? Well, if a single pedestrian complaint, or even a mere handful, could prompt FDOT to spring into action mid-key, why should it take over 180 vehicle accidents involving property damage and in many cases personal injury and even fatalities to get the agency’s attention on the north end of the Island?

“Imagine A Place Where Everything is Possible…”

That’s the message splashed across the screen in the opening frames of the promotional video for MTV’s new reality series, ‘Siesta Key.” The words are set against a stunning aerial view of Siesta Beach at sunset that must make the good folks at Visit Sarasota absolutely giddy with anticipation for the high profile publicity the show is certain to bring to the area after it debuts nationwide on July 31.

So be prepared. Remember the upswing in attention the Key garnered after Dr. Beach first named Siesta Beach the nation’s best in 2011? This could be every bit as big.

Even if the show becomes the kind of train wreck its precursor “Jersey Shore” devolved into, with Snooki, Joey and the Situation reaching previously unseen new lows of televised depravity, that opening aerial view of our pristine beach is likely to attract a whole new untapped demographic to the area. 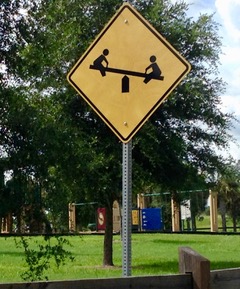 The international sign for playgrounds remains a silhouette of children riding a seesaw. But have you noticed that these icons of the American playground of years past have gone the way of the Dodo bird? They’re conspicuously absent from just about any new playground built over the last decade or so, at least in these parts. The sign shown here is near the modern new playground at Rothenbach Park on the western end of Bee Ridge road. But alas, there’s no see saw to be found nearby.

The reason? I would imagine it’s an overabundance of caution, which isn’t necessarily a good thing.

Anyone who remembers riding one of these things as a kid likely carries the memory of crashing to the ground after some maladjusted playmate on the other end abandoned ship while you were at the apex your ascent. Not a pleasant experience, but generally survivable with nothing more than a sore rear-end and a bruised ego.

But what about the life lesson taken from the experience? About the importance of trust and working together. And also about learning the valuable insight that there will always be those willing and able to take advantage of you, so it’s important to be a good judge of character.

We all want to protect the little ones, but dealing with setbacks is all part of growing up. Seesaws can help!

Bumper Sticker of the Day…

Any Wonder Why a College Education is so Expensive?

It’s at least in part because many colleges and universities have added positions that were unheard of a generation or so ago. Like ‘Diversity Directors’ who now rake-in about $175,000 per year (the average at the nation’s top 50 schools).

But with the widening of physical diversity on college campus, have you noticed a corresponding widening of intellectual diversity on the part of students?…Or does it seem to be just the opposite? A narrowing field of view passed down from an enlightened class of academics who seem unnaturally like-minded in the view of the world they pass down to our youth.

It was altogether predictable. With the push for a $15 per hour minimum wage over the past several years economists and business owners alike assured those behind the effort that if adopted, jobs would be lost. But as cities and even states like New York have begun the process of implementing the higher starting wage, companies have begun the process of eliminating lower wage positions by turning to automation.

McDonalds will replace 2500 workers with kiosks by the end of this year. Those kiosks can already be seen locally. Another 3000 workers will follow in 2018.

Joke of the Day

Message on sign outside a local print shop on Bee Ridge Road:

“Two cannibals are eating a clown when one turns to the other and says: ‘does this taste funny to you?’ ”