Bumper Sticker of the Day

“Siesta Key: A Quaint Drinking Village with a Fishing Problem.”

No, that’s not a pre-season prediction for the Tampa Bay Bucs upcoming season. Rather it’s Money Magazine’s choice as the best up-and-coming large city in the southeast.

Bureaucrats in Tennessee have decided having the words “Mother” and “Father” on birth certificates is just too old-fashioned for the thoroughly modern world we live in today. The long-standing appellations (which are after all rooted in biological fact) will be replaced with the so much more up-to-date (if altogether un-poetic) “Parent Number 1” and “Parent Number 2.”

I can only cringe at where this is all headed…

Just How Long Does it Take to Write a Letter?

In this age of instant communication, Sarasota’s city leaders have given a whole new meaning to the term “Snail Mail.”

To wit: After receiving a letter last month from Sarasota County leaders explaining their position on addressing homelessness in the area, the city took a month to draft a reply in which the city reiterated its opposition to a come-as-you-are shelter within city limits.

It’s a good thing the city recently added and filled a new Homeless Coordinator position – at an annual salary of $120,000 – to tackle tough tasks like this. Otherwise the city would probably still be stuck at “Dear Sarasota County…” in pondering the drafting of its reply.

By the way, the city has asked the county to respond to its recently posted response within 30 days.

Which begs the question: whatever happened to simply picking up the phone and saying, “Hey, let’s get together and talk this over…?”

At this pace, lift station 87 will be finished before any real progress is made on this issue, and by then both the city and county governments will have their own well entrenched versions of “Homeless Affairs” bureaucracies in place…fully developed and staffed to the point where job security for the bureaucrats working in them will assure that homelessness – like the Energizer bunny – goes on, and on, and on, and on…

Thanks for the Help. Now Please Stop…

Perhaps the EPA should add the motto “Ooops…Our Bad!” to their logo in the aftermath of 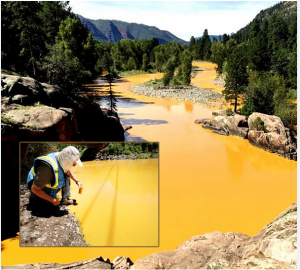 their latest public service: breaching a dam the agency was inspecting at an old mine along the Animas River in the Four Corners region of southwestern Colorado. The breach sent tons of mine waste including toxic heavy metals flooding into the river, turning it orange in the process and fouling it for river rafting businesses, agricultural interests and everyday folks living in towns throughout its watershed that depend on it as a source of clean drinking water.

Speaking from experience, the trip following the Animas to Silverton from Durango aboard the narrow gauge railroad that has connected the two mountain towns since 1881 is an exhilarating trip…well worth the time if you’re ever in that part of the world. The tracks hug the river for much of the 45-mile climb up to Silverton, perched 9300 feet up in the San Juan Mountains. The scenery is simply spectacular, with views of lush alpine meadows, towering peaks and the clear (until the latest EPA episode), swift current of the Animas in the valley below. Just one thing though: you might want to check to make sure the EPA isn’t on the ground “protecting” the area before you book your trip.

During the Watergate hearings that eventually resulted in the impeachment of Richard M. Nixon, Hillary Rodham, then just 27, worked under Democrat Jerry Zeifman, then counsel and chief of staff of the House Judiciary Committee handling the Watergate investigation. In recalling Hillary’s work for the committee, Zeifman has written that Hillary “engaged in a variety of self-serving, unethical practices in violation of House rules” during that period.

Zeifman also added, “Hillary Clinton is ethically unfit to be either a senator or president — and if she were to become president, the last vestiges of the traditional moral authority of the party of Roosevelt, Truman and Johnson will be destroyed.” Again, it is worth noting: this is from a Democrat…not a member of the vast right-wing conspiracy Hillary so often cites.

In any case, love her or hate her, the irony would be of Shakespearean proportions if she is brought down by a cover-up of her role in the latest Clinton scandal, passing classified emails through her own personal server setup in her Chappaqua, New York farmhouse; her responses and reactions to date on the matter eerily parallel in tone and temperament the hubris that proved to be Nixon’s undoing.

That her husband skated by on his own brush with impeachment only adds to the irony… seemingly, emboldening Hillary to ever greater heights of hubris.

As Cassius said, “The fault, dear Brutus, is not in our stars, but in ourselves…”

Nothing ‘Off Key’ about the recent announcement that Renee Fleming will perform at the Van Wezel on January 27th with the Sarasota Orchestra. Many great artists have performed in Sarasota over the years, but perhaps only Elvis – who played the Edwards Theatre in 1956 (now the home of the Sarasota Opera) brought the type of star power and genre specific virtuosity Fleming commands today in the world of classical music, and most especially on the opera stage.

Van Wezel executive director Mary Bensel should be applauded for her work reaching for – and then hitting – this high note in the ongoing ‘score’ of musical success at the Van Wezel.