William Merrill III, of the Icard Merrill law firm in Sarasota, told SNL at the end of January that he has been talking with Sarasota County staff about options for the future of the property at 162 Beach Road, owned by his clients Ronald and Sania Allen of Osprey. 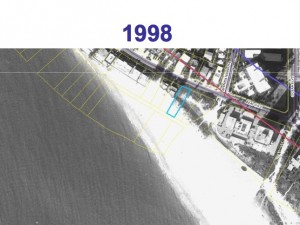 Those discussions have not reached the stage of crafting a proposal for the County Commission to consider, he added. “We’re hoping to get there, but we’re not there yet.”

In October 2015, the County Commission voted unanimously for the third time to turn down a request by the Allens to build a house on the property. Photographic documentation has shown the site was underwater in past decades, and all of the couple’s construction would have been seaward of the county’s Gulf Beach Setback Line, which is designed to control development in sensitive environmental areas. 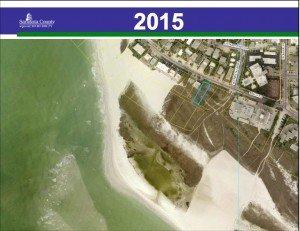 Even before the County Commission voted on Oct. 14, 2015 to deny the Allens’ latest petition for a coastal setback variance — which was crafted after months-long mediation involving county staff — Merrill had cautioned that if the board did not allow the couple to erect a house on the site, that could be considered a “taking.”