It could be more than 10 years before Benderson Development Co. completes all the residential construction it plans for Siesta Promenade, its project slated for the northwest corner of Stickney Point Road and U.S. 41, Todd Mathes, director of development for the firm, told about 110 people during the June 2 Siesta Key Association (SKA) meeting.

Although Mathes emphasized during the session that the firm has decreased the size of the project from the 250,000-square-foot plan it proposed in 2014 to 140,000 square feet, audience members continued to complain about the potential for greater traffic gridlock at the U.S. 41/Stickney Point intersection and along Stickney Point Road itself. Some people also pleaded for the company to create a park on the site instead of new retail and residential space and a hotel.

Mathes stressed the June 2 SKA meeting would not be the last opportunity for people to raise their concerns. He pointed out that public hearings would be necessary before the Sarasota County Planning Commission and the County Commission itself. 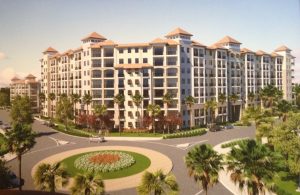 Mathes also emphasized the downsizing of the project as a result of comments from adjoining property owners after the 2014 site plan was unveiled. The revised proposal calls for the retail space to be anchored by what Mathes characterized as a “mid-size” box, which will be a grocery store, such as a Whole Foods or a Fresh Market. A 150-room hotel — most likely a Marriott or Hilton “product,” he added — and four buildings with a total of 600 dwelling units — primarily one-bedroom rental apartments and condominiums — are also what Benderson proposes for the 24 acres.

(Siesta Sand learned that Benderson had further revised the number of dwelling units to 505, as announced during a neighborhood meeting two weeks later.)

The goal is to get the formal application process underway this summer with Sarasota County staff, Mathes pointed out to the SKA members, with the hope that construction can begin on the retail part of the project in the spring of 2017; the latter work is expected to take about a year. Construction of the hotel would start about a year later, he continued, with the first segment of the residential units planned in about five years.

Benderson will seek county approval for a Critical Area Plan so it can build 25 units per acre, he continued, and it will need a special exception for building height up to 85 feet. The residential structures and hotel probably will be seven stories tall, Mathes explained, if the County Commission agrees to the special exception.

Asked whether Benderson has studied the impact of the extra vehicles associated with the residential units and hotel rooms “on the already overburdened traffic patterns” at U.S. 41 and Stickney Point Road — as the questioner put it — Mathes replied that such a review will be part of the traffic study required for the project.

“I’ll tell you that everybody knows [that] there’s a lot of traffic out here during season,” he said. “The percentage increase that we are going to contribute is very, very small.”

Mathes also explained that Benderson has proposed that the current “slip lane” — the outside lane for traffic turning westbound on Stickney Point Road from U.S. 41 — run the full length of the property. That would enable traffic to turn into the complex without having to merge into other traffic headed toward Siesta Key, he pointed out.

Sarasota County does not have enough hurricane shelters, the County Commission learns June 16, 2016