Siesta Key Hardware, a tribute to an iconic store

As the island’s only hardware store closes its doors, many residents will feel its loss. The decades old business contributed to the small town charm of Siesta Key and saved countless trips off island for many. 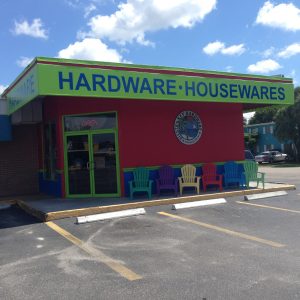 Siesta Key Hardware was established in 1972 by Wally Von Atzinger and his business partner, Bill Poderwitz. Located at 215 Canal Road in Siesta Key Village, the store had a single cash register and mom-and-pop charm, attracting neighbors and customers, beachy folk who often arrived by bike.

That was a sleepier time when stores in the Village often closed unexpectedly, and a GONE FISHING sign appeared in the window.

Wally was a fix-it kind of guy: a natural handyman, fun loving and funny. Within a year, he bought out his partner, and took the store over on his own. His wife, Nora, did the bookkeeping, while his daughter, Cheryl, helped with day to day operations.

Cheryl quickly absorbed her father's handyman knowledge, and grew to love the work. Husband, John Duley proposed to Cheryl right there in Siesta Key Hardware, and before long they were wed. In later years, Wally passed the store on to Cheryl and John, who operated it until 2005, when they sold it after a bad storm season and after their parents and grandmother had died. 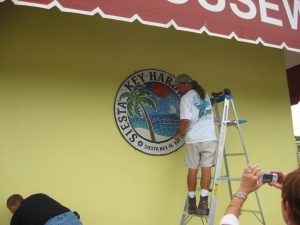 Siesta Key Hardware went through a few hands before Jim and Patricia Hillier came on the scene in 2006. Patricia was experienced in retail while Jim had a great business sense. They both could tell the store was floundering, so they took it on as an adventure. “I’m a major home-improvement guy,” says Jim, recognizing how important the store was to the locals.

Over a varied career, Jim Hillier had centered his life mostly around water. He had been a racing sailboat captain; a submarine technology engineer at Johns Hopkins; and an engineer at Mote Marine Aquarium. He had also been a designer of printing software with his brother.

Comfortable with technology, Jim soon added a computer-based ordering system, organized the inventory, and installed a pricing formula that would stay abreast of product prices.

Patricia Hillier had worked in the music industry for about 25 years. She also had an extensive background in art, working with paints and jewelry, and creating multimedia furniture, sometimes even incorporating tempered glass. As an apprentice at Frank’s Colson’s studio over on Hillview, she had become fascinated working with clay and with tiles. Because of this interest, she created a new store logo for Siesta Key Hardware, one made out of tile mosaic, which was attached to the front of the store. She also revamped the store's interior design by adding beach themed signs. The goal here was to preserve the mom-and-pop setting, and also to give Siesta Key Hardware the style of the tropics. To lend an even more unique flavor, Patricia always kept great music playing in the store, and filled it with artwork of local artists, selling dozens of pieces over the years. 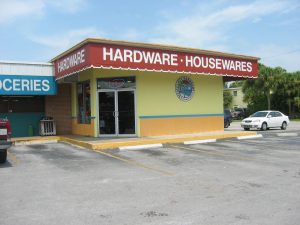 The store’s old-fashioned look fooled no one: SKH SK quickly became a sophisticated place with more than 8,000 hardware items in stock, stock that was automatically refilled each week as needed. Siesta Key Hardware.com also gave customers access to more than 70,000 other hardware items. When ordering on-line, customers were given nationally competitive pricing. They paid no shipping charges, and they didn’t even have to leave Siesta Key to do it! An online order submitted on Tuesday arrived at the store on Thursday, and the customer avoided the traffic issues of driving out to Home Depot.

Now all that is in process of changing. The owners of Morton’s Siesta Market plan to open Siesta Village Liquors, taking over the neighboring rooms that once housed Siesta Key Hardware.

For Jim Hillier, having turned 65, he plans on heeding his mother’s advice to follow his dream. Jim’s dream is to spend more time at Mote Marine Lab, designing electronic instrumentation. He worked there for many years before purchasing Siesta Key Hardware, and has continued to work there one day a week. Now he is delighted at the prospect of reconnecting on a larger scale. Jim also has a couple of inventions in mind that he wants to develop. Besides that, both he and Patricia have dozens of undone projects they want to complete in their handsome Siesta Key home. As Patricia says, “We are slowly but surely updating our house. We do everything ourselves, and enjoy that.”

Patricia looks forward to concentrating on her passion, which is art. The demands of running the hardware business have not allowed her the freedom she enjoys, and she now hopes to get back into painting and making jewelry. “I have a huge amount of beads calling me,” she smiles. “I like very unique pieces.”

Patricia has long made artistic address plaques created out of mosaic. She recently designed a starfish light fixture for the foyer ceiling in their home. Besides other pieces of furniture, she has made a large coffee table using tempered glass over one of her paintings, with epoxy covering the surface. It turned out beautifully, but proved too large for their home. It recently sold at Women’s Exchange.

The Hilliers are delighted to be moving on to other, more personalized adventures. But the residents of Siesta Key will certainly miss their wonderful hardware store.

Joerg Leuenberger of Beach Palms Tropical Island Cottages and Beach View Suites has this to say: "For us it is very sad to see the Hardware Store with Patricia and Jim closing. They are great people, and for us, the store was so close, we did not have to go to the mainland to get some parts. We wish them all the best for the future."

As both a realtor and the owner of The Inn on Siesta Key, Paige Hartmann says: "Siesta Key Hardware was an iconic store that will be enormously missed. As a short-term vacation rental owner, I always knew if something broke that Jim and Patricia would be there with all the parts we needed. They've been a joy to work with, and I wish them all the best."

Another resident, affectionately known as the mayor of Siesta Key, Dave Patton moved from downtown Sarasota to the Key in 1958. Long a regular at Siesta Key Hardware, Dave echoes the sentiments of many, "We're all going to miss the heck out of Jim and Patricia. They have been great for the Village! Now it’s going to be a long drive to get what we need at another hardware store."