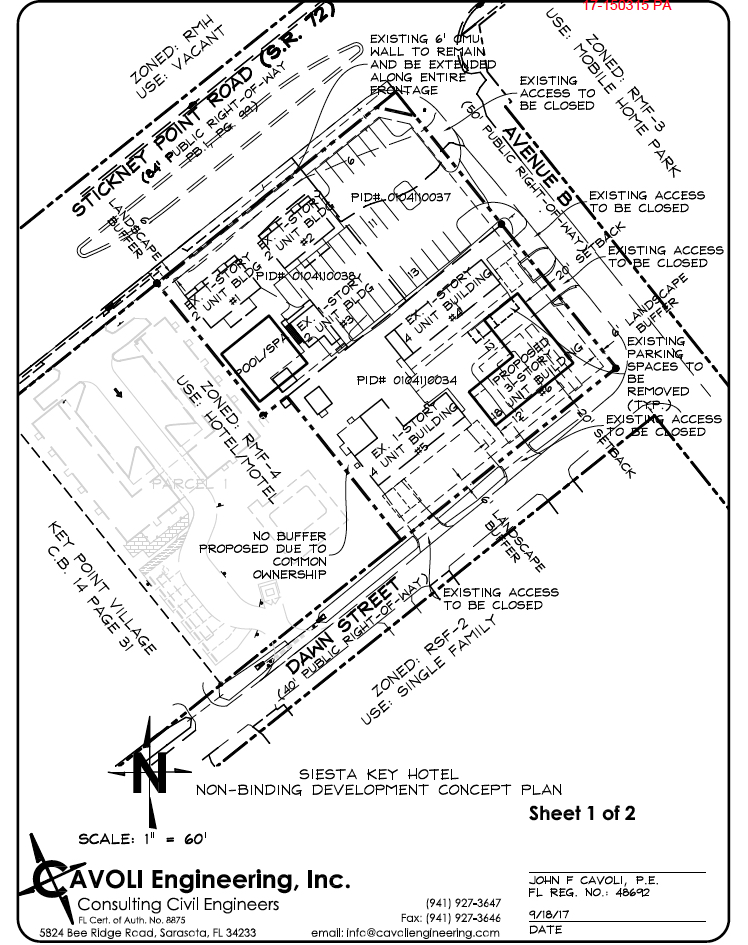 A limited liability company that owns the Siesta Key Palms Hotel and Resort at 1800 Stickney Point Road has filed a rezoning application with Sarasota County to allow the redevelopment of the 1-acre site.

Sarasotaville of Siesta Key also wants to reactivate the Tourist Resort Redevelopment (TRR) zoning district that was moved to the inactive district list in 2003, when the county’s zoning ordinance was updated, according to the Sept. 18 application.

A letter accompanied the application — written by Bo Medred of Genesis Planning and Development in Bradenton — points out that the TRR district is “designed to encourage the preservation and redevelopment of existing historic hotels and motels. This district is intended to apply to older transient accommodations and related tourism resort facilities,” the letter adds.

“The intent of allowing rezonings to TRR for such properties is to facilitate their being redeveloped with ‘boutique’ motel or hotel resort uses,” the application explains. Such facilities would be smaller than traditional hotels — having fewer than 75 rooms — and they would have unique settings and accommodations, the application adds.

The TRR zoning would allow a maximum of 36 rooms per acre, according to the application, but Sarasotaville of Siesta Key says the maximum planned with the redevelopment of the hotel is 30.

The Siesta Key Palms website names prominent developer Henry Rodriguez of Osprey as the owner of the facility. He is listed as the manager of Sarasotaville of Siesta Key in state Division of Corporations records.

The hotel has 21 rooms, its website says. The application notes that six multifamily units and eight motel units stand on the site. Part of the property is zoned Residential Multifamily-4, while the rest is zoned Office, Professional and Institutional (OPI), the application says. Sarasotaville of Siesta Key is seeking to have all of the property rezoned TRR.

Of the five buildings on the site, the applicant wants to preserve four and construct a new one. After Building 6 has been completed, the application adds, then Building 3 would be demolished “to make way for additional parking” for the motel units in the new structure, the application points out. Another goal is to add a new pool and spa.

Two accesses to the site are on Dawn Street, with another two on Avenue B. Those would be closed, the application adds, with an access on Stickney Point Road relocated further south.

Six-foot-wide landscape buffers would be provided along the Avenue B, Dawn Street and Stickney Point Road frontages, the application notes.

The project would not entail any increase in impervious surface greater than the 2,000 square feet proposed, the application says. However, in the event it appears that figure will rise, the application adds, low-impact design features “will be implemented by the engineer.”

The ever changing Village

What’s New on Siesta Key: The eyes have it at Eye Style Optical Boutique

Make your own beer or wine flight tray

Mellow Mushroom, located at 6727 S. Tamiami Tr., is offering another do-it-yourself class at 6:30 p.m. Oct. 12. It will be facilitated by the Nailed It DIY Studio. Participants will be creating their own beer or wine flight tray. All materials will be provided for the $35 fee. Advance registration is required. Do so at […]

A presentation on local water-quality initiatives is being held by Sarasota County from 11 a.m. to 12:30 p.m. Oct. 18. Learn about different projects throughout Sarasota County, as well as opportunities for action. Registration is required. Go to //loom.ly/32puMeY. For more details, visit scgov.net/waterqualitysummit.