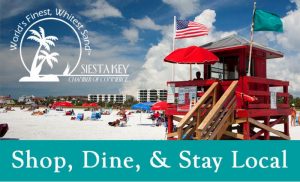 The Siesta Key Chamber of Commerce is preparing to kick off a new promotion at the end of September, inviting people to “Shop, Dine & Stay Local.”

Cards that will be valid for 12 months will offer specials from participating restaurants, retail stores and accommodations, Ann Frescura, the Chamber’s executive director, reported at the Chamber’s quarterly meeting in August.

Although the promotion originally was planned to begin Sept. 1, she and her staff are aiming for the end of September. “The cards are at the printer’s.”

Nearly 30 businesses have signed up, she added.

During the Aug. 16 meeting, Frescura said she was pleased to see diversity among the participants in the promotions. “That’s what we were looking for.”

For examples of what the cards will offer, Frescura called on Kay Kouvatsos, co-owner of Village Café.

The restaurant already had added to its menu “little doughnuts filled with Nutella,” Kouvatsos said. The holder of a Shop Local Card would be able to get a free order with the purchase of two breakfasts, she added. The doughnuts are priced at $6.95, Kouvatsos noted. “It’s a decent value.”

The Siesta Key Oyster Bar (SKOB) will offer drink specials, General Manager Stephanie Brown pointed out, while Mason Tush of CB’s Saltwater Outfitters said CB’s will give a cardholder a $20 discount on a boat rental.

“We can continue to add [businesses to the list] as new members come in,” Frescura explained. “It’s kind of an evolving promotion.”

A sign-up sheet she provided at the meeting said the cards will be sold at the Chamber for $25 each, or five for $100. They will be made of a hard plastic, similar in style to a credit card.

“These are perfect for residents, tourists, gift giving, and make great stocking stuffers!” the sheet adds.

Each participating businesses will receive a sign that can be placed in its window, it will be featured on a printed flyer and it will be included on the Chamber website’s list touting the promotion.

Service Can Save You