Over a month before an administrative law hearing began on challenges to the project, City of Sarasota staff informed Sarasota County staff that the city hopes to use about $3.6 million it is due in Tourist Development Tax (TDT) revenue this fiscal year to help pay for the renourishment of the South Lido Key Beach. Doreen Buonpastore, a fiscal consultant in the county’s Office of Financial Management, reported to members of the county’s Tourist Development Council (TDC) on Nov. 16 that City Engineer Alexandrea DavisShaw had provided that notification. The focus is $3,585,076, or about 15.1%, of total expenses of $23,828,168 projected for the current fiscal year out of the revenue produced by the county’s 5% Tourist Development Tax (TDT). 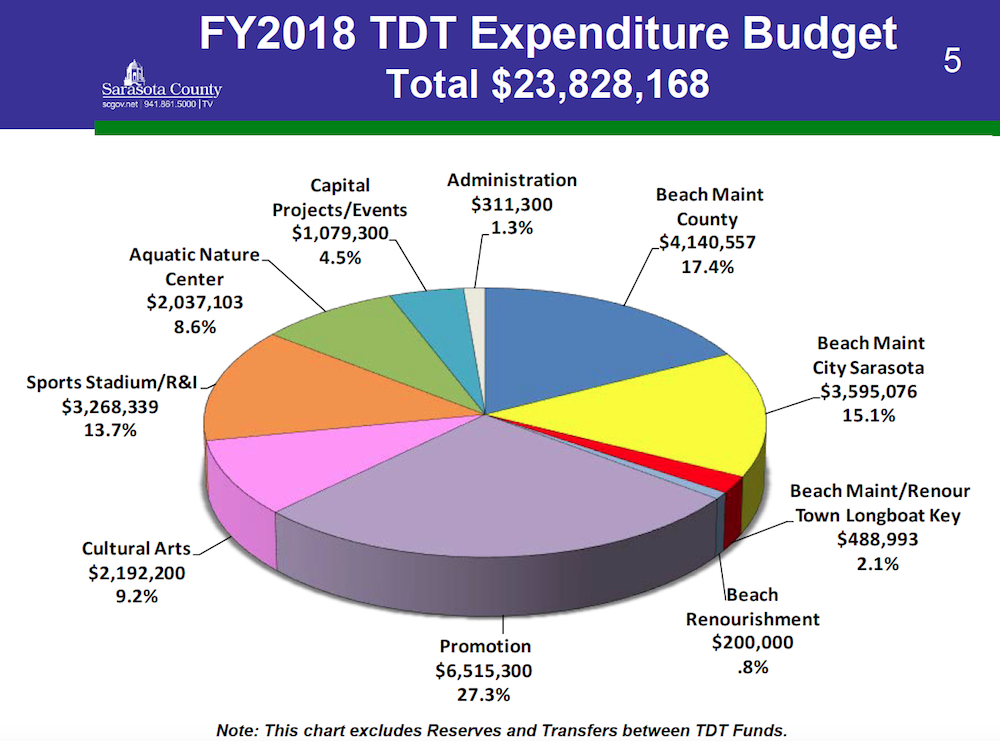 Revenue allocated to the municipalities that they do not use in one fiscal year rolls over to the next fiscal year, Buonpastore has explained in the past.

The “bed tax” is charged on accommodations in the county. Buonpastore was providing the TDC members an overview of the Tourist Development Tax budget for the fiscal year, which began on Oct. 1 and will end on Sept. 30, 2018.

“That’s a big item for Fiscal Year ’18,” Buonpastore added of the approximately $3.6 million, “if [the Lido project] happens.”

Sarasota Mayor Shelli Freeland Eddie, a recent appointee to the TDC, told her colleagues that she planned to be part of a city delegation to Washington, D.C., the first week of December to talk with representatives of the U.S. Army Corps of Engineers and the Environmental Protection Agency — not to mention U.S. Rep. Vern Buchanan, R-Longboat Key — in an effort to ensure the city will not lose any federal support for the project if the city gets assistance from the Federal Emergency Management Agency to deal with sand loss on South Lido as a result of Hurricane Irma’s strike.

Buonpastore noted that DavisShaw had informed her that 62% of the money for the proposed Lido Renourishment Project still is expected from the federal government, with the remainder of the expense to be split evenly between state grant funds and TDT revenue allocated to the city.

“Best of luck to you, from all of us,” County Commissioner Charles Hines responded to Freeland Eddie.

Hines is chair of the TDC.

Buchanan is a member of the influential House Ways and Means Committee, and he chairs its subcommittee on Oversight.

In a Dec. 4 email exchange between City Manager Tom Barwin and DavisShaw, Barwin wrote, “Hopefully with the recent tropical storm and Hurricane losses, combined with the worst erosion and threats in 30 years, we can remain a high priority for either emergency assistance, or great coordination and timely funding once the administrative challenges to the intent to issue permit are processed.”

Barwin was referring to the Florida Department of Environmental Protection’s Dec. 22, 2016 notice that it intended to issue a permit to the city and the U.S. Army Corps of Engineers for the Lido Renourishment Project. That plan was the focus of a December hearing in Sarasota, with the Siesta Key Association and Save Our Siesta Sand 2 challenging the state decision.

During the summer, the City Commission reaffirmed its commitment to the project in a document it sent to the Florida Department of Environmental Protection. The agenda backup material indicated the action was a routine measure because of the city’s pending application for the Lido project.

The document did note that the estimated cost is $21 million, up from the $19-million estimate previously provided by U.S. Army Corps of Engineers staff working with the city on the initiative.

However, that document also pointed out that the construction phase was planned for the 2019 fiscal year.

When the County Commission approved a second placement of sand on the south Siesta Key Beach — which was completed in the spring — it required residents along the affected segment of shore to help cover the cost, Hines explained. (The assessments are being included on annual property tax bills.)

County staff has been polling residents of Manasota Key about a potential initiative to add sand to critically eroded sections of that barrier island, Hines continued. Sarasota County potentially could collaborate with Charlotte County on that project, Hines noted. Nonetheless, he said of the Manasota Key residents, “They are going to have to contribute something” if the county proceeds with that project.

“And that’s probably the way it’s going to have to go in the future,” he pointed out, referring to assessments of affected property owners on shorelines where new sand is placed.

The expense of such efforts keeps escalating, Hines said, and the renourishments are “not lasting as long, either.”

Buonpastore explained that county municipalities in the past have submitted requests to the county for additional funding for renourishment projects.

Each municipality receives a percentage of the TDT revenue set aside for beach maintenance each year, she has told the council members in the past. That is divvied up according to population. That money also can be used for beach renourishment initiatives, she has said.

The City of Sarasota would be using its beach maintenance money for the Lido project, she indicated.

Another delay in Cosentino appeal, plus failed amicus brief

Off Key!: From Dominating Retail to Fact Checking Betrayal