During their search for a site on which to build a new home, Bob and Kay Goodman looked throughout several West of the Trail neighborhoods. 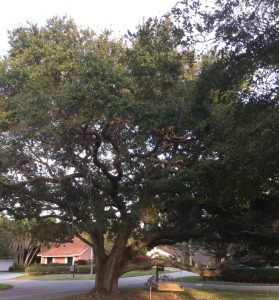 Then their attention was drawn to a single-family home in The Landings. The large, corner lot afforded privacy and the lot size they were seeking. It was, however, a grand oak, complete with a charming swing that won them over.

The Goodmans purchased the home, at 5169 Kestral Park Lane, in July, and are in the process of building a new home, to be constructed by John Cannon Homes, Inc., on the site. As of press time, the demolition of the existing home was nearly complete.

Of course, they are keeping the large oak on the property. “It is probably a 100 years old,” notes Kay Goodman. The Goodmans’ home is the second new home to replace an existing home in The Landings in two years.

Tim Field, a realtor and broker-associate at Michael Saunders Real Estate and the buyer’s agent for the Goodmans, believes that more such projects could be expected within The Landings — following a trend that is already visible in West-of-the-Trail neighborhoods such as Hudson Bayou or Harbor Acres.

“People don’t necessarily want to go to Lakewood Ranch,” Field says. “They want to be closer in [to Sarasota], and they want new.” In some ways— such as precise cost estimates—newer construction can be easier than a remodeling project, the realtor says.

And The Landings is looking more and more attractive for those buyers who are seeking a home to “tear down” to clear way for a new custom home complete with the modern touches, from high ceilings to high-tech air conditioning systems to hurricane-code windows, Field says. Factors such as the community’s central location, rising potential value of a newer home, a variety of lot sizes, and the amenities in The Landings are making it more attractive for buyers who may want to build new.

For the Goodmans, building a new home in The Landings made the most sense. “We wanted a custom design we could call our home,” Kay Goodman said. The Goodmans have always liked The Landings and have friends in the community they know through the Sarasota Yacht Club. In addition, their future, new neighbor across the street went to high school in Sarasota with Bob.

The Goodmans, who are moving from Siesta Key, plan to soon list for sale their Hidden Harbor home that features 150 feet of waterfront. “We sold our boat, and that is one reason we are moving off the Key,” Bob Goodman said, noting that traffic congestion on and off the island also contributed to their decision to move. They recently purchased an RV, and plan to travel more. The security of The Landings community, therefore, was another factor in the decision to purchase in the community.

Bill Whitman, president of the Landings Home Owners Association, Inc., agrees with Field that residents could notice some more new homes in The Landings.

“I think we will see more of it,” Whitman said. But he notes that the majority of buyers who are purchasing a single-family home in The Landings, often at a pricetag of upwards of $500,000, could likely still opt to remodel — rather than raze the home — even if it does need some work. “Mostly, we will see more renovations of homes with a satisfactory structural condition,” Whitman predicts.

Whitman has seen some preliminary designs of the home, and he believes it looks like the home will become a positive addition to the community. “John Cannon homes is a first class operation,” Whitman said.