A tax exemption for an historic cottage

The pared-down agenda the County Commission handled post-Irma on Sept. 13 included one item related to a historic beach cottage near Point of Rocks.

Under the heading of Presentations Upon Request, staff of the county’s Libraries and Historical Resources Department were seeking adoption of a resolution “granting ad valorem tax exemption status to the designated historic single-family residence located at 7132 Point of Rocks Circle, Sarasota, for 100 percent of the value of the qualifying improvements made to the property,” the agenda item said. The exemption would be good for 10 years, commencing on Jan. 1, 2018.

With no member of the public present to make comments, and no board member seeking a presentation, Commissioner Alan Maio made the motion to adopt the resolution and to approve an historic preservation property tax exemption covenant between the county and the Barry J. Eckhold Trust, which the agenda identified as the owner of the property. The covenant requires the trust “to maintain the integrity of the qualifying property improvements for the duration of the exemption period.” 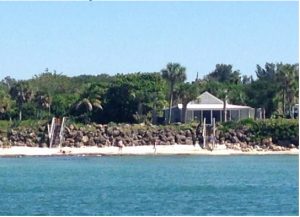 The focus of this action is a structure known as the Palmer-Honore Beach Cottage. Based on research conducted in the Manatee County historical archives, ownership of the property dates back to 1911, a 2015 county report said. “This information supports the Sarasota County Property Appraiser’s record that dates the house as c. 1918. The owner at that time was Mrs. Bertha Potter Palmer,” the report added. “Following her death in 1918, the property went to her estate,” with her brother, Adrianne Honore, acting as executor, the report noted.

Bertha Potter Palmer, as many people in this area know, arrived in Sarasota from Chicago in the winter of 1910 and fell in love with the area. She became one of the most prominent people in the history of the county’s development.

When she first traveled to Sarasota, “she was preceded by her reputation as a keen businesswoman, a patron of the arts, an international socialite and the widow of Chicago multi-millionaire Potter Palmer,” according to the Sarasota County History Center.

“The cottage is historically significant,” the 2015 county report said, because of its “association with early beachfront development in Sarasota County. The simple vernacular style was typical of beach cottages scattered along Siesta Beach up until Sarasota’s post World War II development boom. … Although larger permanent residences have been constructed in the Point of Rocks area, several remaining early beach cottages exist as a reminder of the low scale, small size seasonal structures that had been so common on the barrier islands.”

The report also noted the cottage’s “integrity of materials”: original framing, pier foundation, masonry fireplace, exterior siding and interior pressboard wall sheathing, which convey material use and craftsmanship typical of the period in which the structure was built. 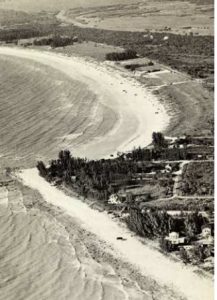 On April 21, 2015, the County Commission adopted a resolution granting the historic designation of the cottage. A staff memo provided to the board in advance of that meeting said that on Jan. 27, 2015, Greg Hall of Hall Architects, the authorized agent for the property owner — Barry Eckhold — had submitted an application to the county’s Historical Resources Division staff, seeking that designation.

A staff memo provided to the board on May 31 of this year explains that the county’s staff and its Historic Preservation Board (HPB) took the necessary steps to ensure that the rehabilitation of the historic building met the necessary criteria for the trust to seek the ad valorem tax exemption.

The HPB provided a recommendation to the County Commission, dated Jan. 24, saying that the County Code allows designated historic sites within the county to seek such exemptions for restoration, renovation or rehabilitation work. However, the overall project cost has to exceed 15% of the value of the property at the time the rehabilitation is undertaken.

In this case, the memo notes, the total of the rehabilitation was $507,530.27. As the Sarasota County Property Appraiser’s Office valued the cottage at $150,200 in 2015 — the year the application for the work was submitted to county staff — that far exceeded the 15% mark, the memo added.

According to the Sarasota County Property Appraiser’s Office, the total assessed value of the land and buildings this year is $1,377,200. The Eckhold Trust has owned the property since May 2014, the records show, paying a total of $1.8 million for it.