Siding with their historical resources manager instead of the county’s Historic Preservation Board, the majority of the Sarasota County Commission voted on Sept. 26 to deny a formal historic designation to the house at 112 Sandy Hook Road South on Siesta Key.

Only Chair Paul Caragiulo was supportive of the application from the homeowners, voting, “No” on a motion by Commissioner Nancy Detert.

Robert Bendus, the county’s historical resources manager, told the board during a public hearing that the one-story, mid-century modern ranch house built in 1960 “has undergone later additions and alterations.”

Further, he continued, “Research indicated that the original owners, the Gerlach family, does not appear to have made a contribution to the local, regional, state or national history for the association to be considered historically significant.”

However, Lorrie Muldowney, the agent for the current owners, noted that during her 20 years of work in historical resources with the county, she co-authored the ordinance at the focus of the discussion that day. It was written to recognize “places that are important to us as a community but may not seem so important to others or be so well understood by others outside the community.”

The Philip “George” and Caroline Gerlach residence, Muldowney pointed out, was part of the subdivision that renowned architect Mary Rockwell Hook helped develop on Siesta Key. Muldowney added that Hook “did want to retain some design control” over Sandy Hook homes.

In 1906, Hook became the second woman to graduate from the prestigious Ecole des Beaux Arts in Paris, and she worked with a number of architects in the community who went on to garner national and international attention, Muldowney explained. “It’s kind of a ‘Who’s Who’ of significant Sarasota County architects.”

The County Code has specific criteria for granting historic designation to a property, Muldowney explained, and, in her opinion, the Gerlach house meets the preponderance of them.

However, testimony during the hearing from a member of the county’s General Contractors Licensing & Examining Board, seemed to have swayed at least one commissioner’s vote.

Morgan Skoegard said a contractor who had been involved with improvements to the house had appeared before the Licensing & Examining Board the previous week. The real reason behind the application for the historic designation, Skoegard added, was that winning that designation would enable the homeowners not to comply with what is known as the “50% Rule” of the Federal Emergency Management Agency (FEMA): If the owner of a structure in a floodplain wishes to undertake work on it, and the total expense will exceed 50% of the value of the building, then the owner must elevate the structure to the appropriate height to withstand storm surge.

Muldowney told the board that the contractor Skoegard referenced was not involved with the current project team.

Nonetheless, in seconding Detert’s motion, Commissioner Alan Maio pointed out, “We really need to honor what FEMA is trying to accomplish.”

“The testimony by Morgan was a bit surprising to me,” Muldowney stated in a telephone interview later that day. “I really didn’t have any factual information to be able to corroborate or dispute anything he said.”

The contrast between Skoegard’s remarks and those of the architect working with the homeowners probably confused the county commissioners, Muldowney added.

In the wake of the board’s vote, the owners of the property at 112 Sandy Hook Road — George and June Shadoan — will talk with their architect, Dan Ionescu of Englewood, Muldowney felt sure, “to see what options are available to them.” They were interested in the fact that the historical designation would allow them to forgo the 50% Rule, Muldowney pointed out.

However, Muldowney added that found it unfair for members of the public to believe that owners of historic properties “are given a free ride, if you will,” by FEMA. 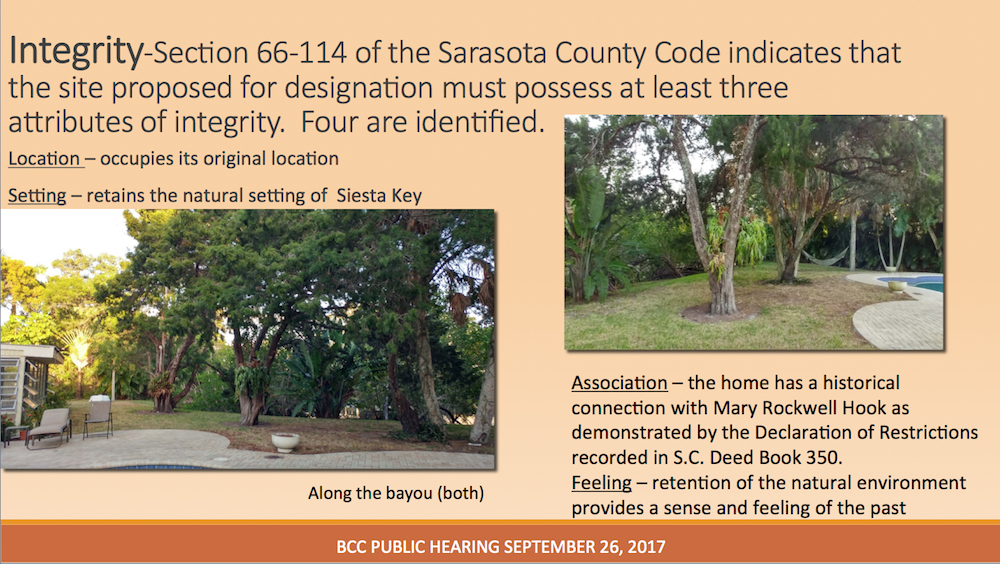 The memo Historical Resources Division Manager Bendus provided to the County Commission in advance of the Sept. 26 meeting says the Shadoans made a preliminary presentation to the county’s Historic Preservation Board (HPB) on Jan. 20. After HPB members requested more information, the memo notes, the Shadoans suggested the county’s Historical Resources staff conduct a site visit. That was done on Feb. 7, the memo adds.

Then, on March 7, Muldowney submitted the formal application for the historic designation, and on May 23, the HPB recommended approval, the memo notes.

Historic Resources staff agrees that the house possesses three of the seven attributes a property needs to win historic designation, Bendus told the commission on Sept. 26: location, setting and feeling, based on the context of the Sandy Hook subdivision.

On the other hand, Muldowney said during her presentation she believes the property meets four of the attributes: setting, location, feeling and association.

“Staff opined that the only direct association is tangential in nature, represented by the sale of the lot by [Mary Rockwell] Hook to the Gerlach family and the possible, but unsubstantiated design review conducted by Hook,” the memo explains.

Conversely, the HPB members “agreed that the residence possesses three attributes of integrity” as set forth in the County Code in regard to historic designation: setting, location and feeling, the memo notes, “and [they believe it] embodies the distinctive characteristics of a type, period or method of construction, specifically the Mid-Century Modern style.”

The house is not listed on the National Register of Historic Places, and it is not eligible for such a listing, as confirmed by the State Historic Preservation Office, Bendus told the board on Sept. 26.

Muldowney explained that she has nearly 30 years of experience in historic preservation and urban planning. Two years ago, she added, she resigned as manager of the Historical Resources Division to go into private practice.

Muldowney said she believed staff was not relying enough on local factors in recommending against the designation for the Gerlach house.