During the August Siesta Key Association (SKA) meeting, the new executive director of Reopen Beach Road, Mary Anne Bowie, told the approximately 65 people present that the nonprofit has been growing the signatures needed to hold a special election on the two proposed Sarasota County Charter initiatives it launched last year.

Bowie added that Reopen Beach Road also hopes to set a record for the shortest amount of time needed to get privately initiated amendments before voters. “We should be on the ballot before the end of the year,” she added, drawing applause.

Mike Cosentino, president and treasurer of the nonprofit, told the audience that the record is 18 months, but the average amount of time it takes is 36 months.

In response to a question, Cosentino added that no time limit exists on a charter petition initiative. Sarasota County Attorney Stephen DeMarsh indicated that, as well, in an answer last year to the same question.

Cosentino also told the SKA audience that the county will call an election within 90 days of receiving the necessary number of valid signatures on a petition. However, SNL found that the Sarasota County Charter provides for 60 days. “These things are very expensive,” Cosentino did acknowledge in discussing special elections.

On Aug. 7, an inquiry to the Supervisor of Elections Office staff about the cost of a special election for such ballot initiatives. Administrative Assistant Cathy Fowler responded that the expense would be between $450,000 and $500,000 for a standalone election. However, she explained, if Reopen Beach Road waited for “a regularly scheduled election,” such as a primary or general election, no additional expense would be necessary.

A majority of the county’s voters must approve a proposed amendment for the section to become part of the charter, the charter points out.

A slide Bowie showed the SKA audience on Aug. 3 said that from 9 a.m. to 5 p.m. on weekdays, Reopen Beach Road representatives gather petitions at the corner of Adams Lane and Washington Boulevard, in front of the Sarasota County Tax Collector’s Office in downtown Sarasota. The Tax Collector’s and Supervisor of Elections’ primary offices are in the Terrace Building.

Reopen Beach Road was incorporated in the State of Florida on June 22, 2016. Along with Cosentino, who lives on Avenida de Mayo on Siesta Key, the officers named in the state Division of Corporations records were Eric Seace of Roberts Point Road, vice president; Jill Lyons of Calle de Costa Rica, secretary; and Jamey Burns of Island Circle, director. In the most recent filing with the Florida Division of Corporations, Burns has been replaced by Linda Valley of Moonmist Circle. 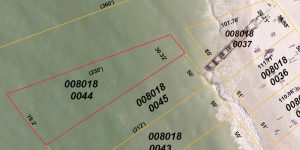 As for the proposed amendments themselves: The first says the following: “Article III, Section 4.1. Preserve County-Owned Parks, Preserves, Beach and Water Access and Waterfront Vistas. The County shall not sell, and shall retain ownership of, County-owned Parks and Preserves, and shall not vacate or sell County-owned road segments or right of way along or abutting any beach, river, creek, canal, lake, bay, gulf access or waterfront vista. The County shall encourage maximum right of way use for public access and viewing of waterfront vistas. Whenever feasible, the County shall make these areas accessible to mobility impaired persons.”

On Aug. 3, not only did SKA members hear about Reopen Beach Road’s efforts, they also learned about a new nonprofit organization Mike Cosentino has established. Incorporated with the State of Florida on June 8 of this year, Siesta Key Beach Community Trust, whose mission — according to that documentation — is to support “Sarasota & Siesta Key Community by acquiring and protecting beach & water access property and by providing amenities necessary for accessibility for our elderly [and those who are mobility- and vision-impaired].” Along with Cosentino, the directors are Thomas Jackson and Cynthia Breslin of Sarasota.

During the SKA meeting, Mary Anne Bowie, executive director of Reopen Beach Road, talked of plans to rebuild the old groin — which she referred to as a pier — on the property Cosentino bought last year at 10 Beach Road. That work would be done through the new nonprofit, she added.

When Cosentino spoke to the audience later, he said it is his intention to give both the 10 Beach Road parcel and a second one he owns west of it to the new trust. His focus, he added, “is access for the elderly and mobility-impaired.”

He wants to create the Sunset Point Community Pier, he said; he is working on how best to ensure his property will remain available to the public in perpetuity.

Bowie talked, too, of Cosentino’s lawsuit against Sarasota County, which seeks to overturn the County Commission’s May 11, 2016 vote in favor of the road segment vacation. If the entire length of North Beach Road again were open, she continued, it would “in all likelihood be a worldwide attraction, with its amazing unobstructed gulf view drive, bike/walk/skate and travel way.”

“We’re holding our own right now on the lawsuit, Bowie said.

Another hearing has been set in that case for 9 a.m. on Wednesday, Sept. 27. At that time, Judge Frederick Mercurio will consider a Sarasota County motion for partial summary judgment on another count of Cosentino’s second amended complaint, 12th Judicial Circuit Court records show.

In April, Mercurio granted a motion by intervenors in the case — Dennis and Wendy Madden — to dismiss one count of Cosentino’s complaint. The Maddens were among the three sets of couples who petitioned last year for the road segment vacation. (See the related story in this issue.)

In his June 2 filing in the case, Assistant County Attorney David Pearce argued that Cosentino “wrongly claims the County Charter requires a coastal setback variance applicant to disclose percentages of ownership of their property.” Additionally, Pearce wrote, Cosentino is wrong in contending that the county failed to meet the legal deadline for posting the official notice of the road vacation in the aftermath of the County Commission decision.