The U.S. Army Corps of Engineers (USACE) has informed the Sarasota County Commission that it does not believe an Environmental Impact Statement is warranted on its joint project with the City of Sarasota to dredge Big Sarasota Pass to renourish South Lido Key.

In a letter to Commission Chair Alan Maio, dated Nov. 29, Gina Paduano Ralph, chief of the USACE’s Environmental Branch at the Jacksonville District Office, wrote, “A previous [National Environmental Policy Act] analysis addressed the effects on the beach placement area through the use of an EA [Environmental Assessment]. The Corps’ analysis to date, and their administrative record, indicate that the use of the [Big Sarasota Pass] ebb shoal [as a sand source] would not have a significant impact on the quality of the human environment; therefore, the project can be evaluated in an EA.” 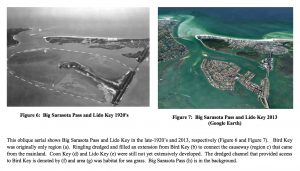 She added, “There has been significant public comment concerning the modeling results [used in preparation of the proposal], and general opposition to the construction of the project.” Members of the public are concerned about the potential for the natural downdrift flow of sand to Siesta Key to be disrupted, leading to negative impacts on the beach, she acknowledged. “However, Federal and state agencies with jurisdiction over, and expertise concerning, resources in the project area have reviewed the modeling results, including several peer reviews of them,” she wrote, “and they have not expressed significant concerns about these modeling results or the project in general.”
Ralph also pointed out, “Vigorous opposition to the Federal action does not amount to the existence of a substantial dispute or scientific controversy about the effects of the action. The Corps and resource agencies remain confident in their scientific analysis of impacts.”

However, in discussing a peer review of the project undertaken by Atkins at the behest of the County Commission, Charles Mopps, senior project manager for Atkins, told the board on March 23 that newer technology is available to undertake much more precise modeling than the USACE and its consultants had used. Although employing the Delft3D model developed by the Dutch would be beyond standard practice, Mopps said, such an initiative would be preferable because of “how [truthfully] that model could potentially predict [results].”

Ralph does conclude in her letter that, if upon preparation of the EA — which is required as part of the state permitting process for the project — the USACE determines that the dredging of the pass “would have a significant impact on the quality of the human environment,” it will proceed to prepare an EIS.

Before the County Commission held its last meeting of 2016 — on Dec. 14 — both the Siesta Key Association (SKA) and the Siesta Key Chamber of Commerce wrote to the board members, urging them to continue to press for an EIS. However, no commissioner brought up the matter that week.

On Aug. 23, the County Commission voted unanimously to request that the USACE undertake the EIS because of the board members’ concerns about the potential negative impacts on Big Pass as well as Siesta Key. The SKA had sent a letter to the board on July 14, requesting the board take such action. Other nonprofit organizations on Siesta Key — including Save Our Siesta Sand 2 (SOSS2) — earlier had sought an EIS.

During the County Commission’s Aug. 23 meeting, Maio told his colleagues and the public, “The biggest concern to me was there was never a ‘Plan B’ for a smaller taking of sand” from Big Pass. Commissioner Christine Robinson added that she could not “turn a blind eye to the … possible ramifications” that the dredging of the pass could leave Siesta Key is as bad a situation as South Lido.

In the last group of documents it submitted to the Florida Department of Environmental Protection (FDEP), the USACE said it planned to remove 1.2 million cubic yards of sand from the pass for the initial renourishment of South Lido’s critically eroded beach. However, the document also explained that the USACE expected to lose a certain percentage of that sand through the dredging process, leaving about 950,000 cubic yards to be placed on South Lido.

The SKA and SOSS2 also have called attention to the potential for the dredging to destroy wildlife and aquatic life in the pass. Additionally, on Aug. 19, Ann Harvey Holbrook, staff attorney for Save the Manatee Club, wrote FDEP, pointing out that the Florida Administrative Code says, “No project may be permitted which would impair the growth and reproduction of resident species, including species and communities based on seagrass ecosystems.” “Benthic” refers to the lowest level of a body of water, including the sediment surface and some sub-surface layers. Organisms living in that zone — including crustaceans — are called the “benthos”; they are an important part of the food chain, research shows.

The $19-million project calls for periodic renourishments of South Lido over a 50-year period; the FDEP permit would be for 15 years. City of Sarasota Engineer Alexandrea DavisShaw has explained that the pass would be monitored intensively after the initial dredging, in an effort to prevent adverse effects. Further, she has said, more sand would not be removed from the pass if the borrow areas had not replenished themselves naturally after a dredging.

FDEP staff announced in late September that it would issue a notice by Dec. 27 about its intent to issue or deny the permit the city and the USACE need to pursue the project. No federal funding has been authorized for the undertaking, but Susan J. Jackson, a USACE spokeswoman in the Jacksonville District Office, has told the News Leader that the agency would be more likely to receive the funding after it had a permit in hand.

In her Nov. 29 response to the County Commission, Ralph provided an updated description of the proposed project, noting that it includes creating an 80-foot beach berm with the new sand, along with “an additional advanced nourishment section averaging 96-feet wide, for a total of 176 feet, over 1.56 miles of shoreline with a groin field at the southern limits of the project.” The original proposal called for three groins, but when the USACE submitted its permit application to FDEP in March 2015, it had eliminated one of the structures.

Ralph added that the plan is to renourish the beach “at 5-year intervals for 50 years of Federal participation.” However, DavisShaw told the County Commission during a March public hearing that she expected the intervals to be as long as seven to 10 years.

In explaining the need for the project, Ralph pointed out that the county’s coastline consists of barrier islands “separated from the mainland by shallow tidal lagoons. Problems in this area “consist of beach erosion and shoreline recession resulting in property damage to coastal development on Lido Key.”