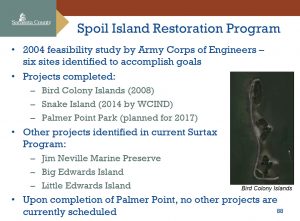 Once more, county plans to finish the restoration of Palmer Point Park have fallen by the proverbial wayside. This time, the action came in the wake of commission and staff efforts to find every conceivable dollar to help pay for several high-priority projects, including the North Extension of The Legacy Trail to downtown Sarasota.

On March 29, as the County Commission participated in its most recent budget workshop, Matt Osterhoudt, director of the county’s Planning and Development Services Department, explained the Spoil Island Restoration Project. The goals, he said, are to restore degraded coastal habitat, provide additional recreational benefits — including better fishing and boating opportunities — improve habitat for fish and wildlife, and foster ecotourism.

The county’s five-year Capital Improvement Program (CIP) budget for fiscal years 2017-21 included $100,000 for Palmer Point Park this year, as well as $2.3 million in the 2019 fiscal year for work on other spoil islands, he noted.

And just what are those islands? They were created by the dredging of the Intracoastal Waterway (ICW) in the 1940s and 1950s, Osterhoudt said.

A 2004 feasibility study undertaken by the U.S. Army Corps of Engineers identified six sites where improvements could be made, Osterhoudt continued. As a result, the county restored the Bird Colony Islands off the north end of Siesta Key in 2008, and the West Coast Inland Navigation District completed a project on Snake Island in 2014, he said.

Along with Palmer Point Park, the other sites proposed for restoration are Jim Neville Marine Preserve and Big Edwards and Little Edwards islands, Osterhoudt added.

Palmer Point Park, located on the north end of Casey Key, comprises about 2.5 acres. It has endured what one easily could call a series of travails.

In May 2011, the County Commission authorized a $559,650 contract with Tampa Contracting Services Inc. to remove and dispose of exotic vegetation; excavate and grade dredge spoil material; transport the excavated material; and supply and plant wetland and upland vegetation on the southeastern section of Palmer Point Park, staff documentation shows. It was the first spoil island restoration project designed to improve water quality in Little Sarasota Bay, returning the body of water to the level of health it enjoyed before the U.S. Army Corps of Engineers dredged the ICW.

However, a resulting dispute with the contractor over a sediment management plan for the dredge material led to the project’s cessation before completion, staff explained to the commission in November 2011.

Controversy also ensued during that first attempt to restore the island, because plans called for putting material removed from the island on barges and transporting it via the ICW to a site in the Vamo Road community south of Siesta. Then, the material would be trucked through the neighborhood. Needless to say, residents voiced more than a few complaints about that proposal.

As a result, staff switched to a new plan, which called for bringing the barges to a Florida Department of Transportation (FDOT) right of way on the north side of the Siesta Drive bridge. Trucks would take the material from that site, along Siesta Drive, to access U.S. 41.

As late as 11 months ago, county staff was sticking with the latter plan. Spencer Anderson, a senior manager in the county’s Public Works Department, explained it during a May 2016 County Commission budget workshop.

On March 29, Osterhoudt told the commission that although staff had been proceeding with plans to finish the Palmer Point Park Project, responses to the bid it had advertised had exceeded the engineer’s estimate of $677,250. In fact, the lowest valid bid came in at $1,199,048.55, according to a slide he showed the board.

Given the total project budget, Osterhoudt said, that would leave an estimated shortfall of $425,000.

Since the design and permitting work had been completed, however, Osterhoudt advised the commissioners that they could take the $425,000 out of the $2.3 million allocation programmed in the 2019 fiscal year for spoil islands restoration and complete the Palmer Point Park Project. If they proceeded along that path, the approximately $1.9 million left for FY19 could be used for other county CIP initiatives.

Staff also wanted to offer an Option 2, he continued: Defer the Palmer Point Park Project and other spoil island restoration work — or revisit those efforts in the future when funding became available. That would make the total of $2.7 million available for other projects, such as The Legacy Trail extension.

Even if the board chose the deferment scenario, Osterhoudt noted, about $620,000 still would be available for spoil island initiatives, thanks to other funding sources, including a Community Foundation grant.

Yet another potential means of paying for the spoil islands restoration, he said, might be what staff has referred to as the “local pot” of funds that will come to the county through the RESTORE Act. About $5.5 million is anticipated by 2031 from the BP settlement over the Deepwater Horizon oil rig disaster in the Gulf of Mexico in 2010, he pointed out. The timeline for the county’s receipt of that money has yet to be determined, Osterhoudt said.

With no discussion, Commissioner Nancy Detert made a motion to go with Option 2. Commissioner Alan Maio seconded it, and it passed unanimously.

Siesta Key Coalition mounts major offensive, but to no avail

By John Morton A warning was issued July 2 by the Centers of Disease Control and Prevention that linked, at least in part, Sarasota-based Big Olaf Creamery to an outbreak of listeria that has caused one death and 22 hospitalizations in 10 states. It recommended that any Big Olaf ice cream be thrown out and […]