About that new Siesta Drive fence 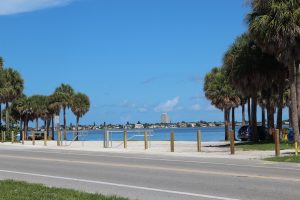 Motorists heading on and off Siesta Key in mid-August most certainly noticed that a fence and swing gate were being installed along the road just east of the north drawbridge, adjacent to the lookout over Sarasota Bay.

In response to a question about the project, Jan Thornburg, senior communications manager for the City of Sarasota, wrote in an email that the Florida Department of Transportation (FDOT) is undertaking the work on the site, which is FDOT property.

“The City, on behalf of the residents of San Remo and Bay Island/Siesta Association, requested enhanced safety and control/access of the area,” Thornburg pointed out. “FDOT agreed.”

The public will continue to have access to the area 24 hours a day, seven days a week, Thornburg noted. However, she added, “Vehicle access will be prohibited between 11 pm and 5 am.

The surrounding neighborhoods have been kept informed during the discussion.”

In response to a request for details from FDOT about the fence, Zachary Burch, government affairs and communications manager for the department, wrote in an email, “The City requested that we install the bollards and the gate and FDOT agreed. We should be finishing the installation this week. The City will be responsible for opening and closing the gate. We explained to the City that it must remain open during the daytime hours, and I believe that the agreement was that they would only close it from 11 PM to 5 AM.”

On June 30, Sarasota Vice Mayor Liz Alpert notified Police Chief Bernadette DiPino and City of Sarasota senior staff members that she had received a phone call from a San Remo resident who had reported a number of attempted break-ins and one car theft.

The San Remo neighborhood is on the south side of Siesta Drive, near the FDOT property.

“There have been several neighborhood meetings about [the incidents],” Alpert added in her email, noting that the San Remo residents questioned the safety of the city.