Regular readers know that concerns have been raised over the past year about homeless people routinely making themselves home — and piling up their belongings — in the Village gazebo. Sheriff’s Office personnel — especially Lt. Donny Kennard — have explained that officers treat every person in the same manner. Although members of the public have been intimidated by homeless individuals in the Village, no one can be arrested, Kennard has pointed out, unless a homeless person has committed a crime.

However, since April, Sarasota County staff has been working in earnest on a new Quality of Life Ordinance that has been crafted to help resolve issues with homelessness, including sleeping in public places and storing personal items in public areas.

“After requests for posting of signage at the Gazebo, I have worked with Facilities and Parks and Recreation staff to get approval to post the attached sign.” 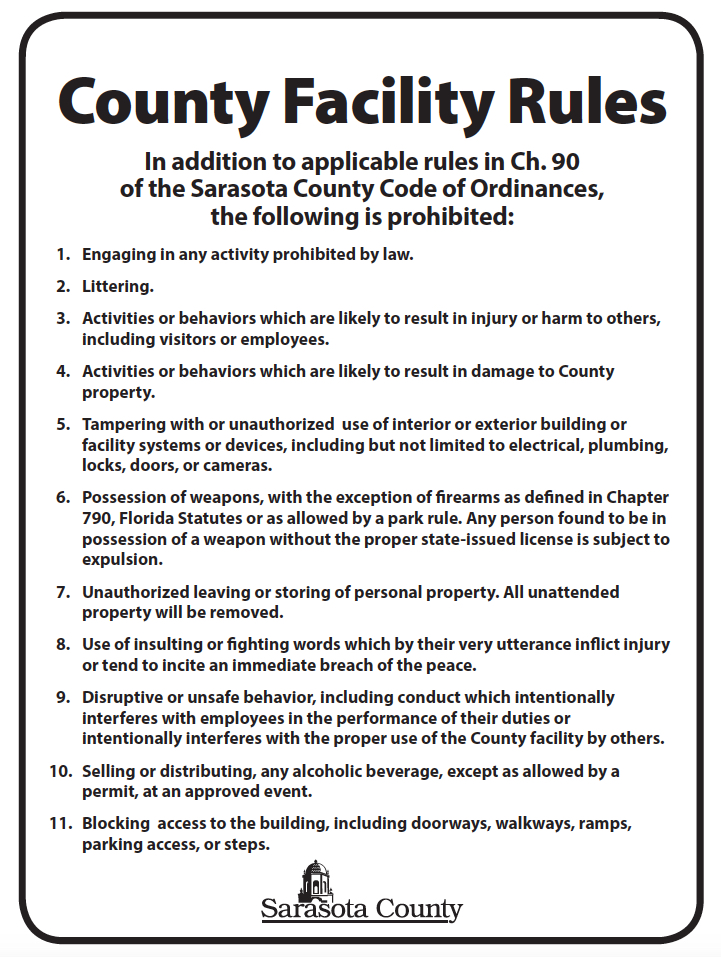 That sign lists 11 activities that are prohibited by Chapter 90 of the county’s Code of Ordinances. Among them are “Disruptive or unsafe behavior, including conduct which intentionally interferes with employees in the performance of their duties or intentionally interferes with the proper use of the County facility by others,” “Unauthorized leaving or storing of personal property,” “Selling or distributing any alcoholic beverage, except as allowed by a permit, at an approved event,” and “Use of insulting or fighting words which by their very utterance inflict injury or tend to incite an immediate breach of the peace.”

Cece added in her email, “Once posted, the rules provide enforceability by law enforcement.” She noted that any derelict or abandoned property will be picked up and stored by county staff. “Anyone seeking to get their items returned may contact the Sarasota County Contact Center at 861-5000 for instructions and location.”

Moreover, Cece pointed out, “Anyone remaining in the site more than a reasonable period of time (daytime) could receive a Trespass warning by the Sheriff, upon request by County staff. If there is an altercation, arrests can be made, or if refusal to leave and a Trespass violation is issued, the person will not be able to return to the site for a period of one year.”

Village Maintenance Manager Michael Shay noted that the sign went up shortly after 5 p.m. on Oct. 3: “Sergeant [Jason] Mruczek and his Deputies were in the gazebo area on another matter, so I alerted him the sign is up, which adds enforceability of the posted rules.”

Shay stressed that if a deputy issues a trespass notice against someone for violation of the conduct rules in the gazebo, that person will be banned from the gazebo for a year.