A 20-year-old Sarasota woman has been charged in connection with six burglaries of vehicles on Siesta Key, the Sarasota County Sheriff’s Office has announced. 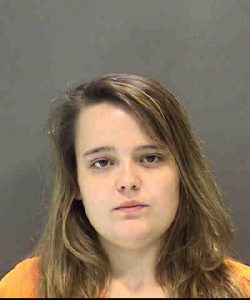 She was taken into custody again on Sept. 22 after detectives allegedly connected her to a second incident on Higel Avenue, two on Island Circle and one on Roberts Point Road, according to Sheriff’s Office reports.

In both cases, Young was ordered held on a $6,000 bond. She was released on bond from the county jail on Oct. 3. On    Sept. 27, she entered a plea of not guilty and asked for a jury trial, 12th Judicial Circuit Court records show. Young is being represented by Assistant Public Offender Lori Huskisson.

In announcing Young’s second arrest, the Sheriff’s Office added that detectives were continuing their investigation and expected to link Young to yet more burglaries.

The investigation began on July 17, a Sheriff’s Office news release noted, when the first victim reported his credit card had been stolen from his unlocked vehicle on Higel Avenue. An online purchase costing $176.42 was made with the card at 4:06 a.m. on July 17, just hours after the burglary occurred, the Sheriff’s Office report pointed out. A package subsequently was delivered to a Tangerine Drive address in Sarasota, the report noted.

On Aug. 8, the second victim reported his credit card stolen from his vehicle on Siesta Cove Drive, the news release added. That card allegedly was used to make a purchase that also was delivered to the Tangerine Drive address, the release noted. The Tangerine Drive house is on a corner lot at the intersection with Shade Avenue, according to a map provided by the Sarasota County Property Appraiser’s Office.

“Detectives quickly gathered surveillance video from a nearby residence,” which showed a female suspect going through vehicles at the second victim’s home, the news release said.

After detectives obtained subscriber information for the internet account associated with the Tangerine Drive home, the release continued, detectives identified Young “as the suspect who made the online purchases.” She also appeared to be the person in the images pulled from the surveillance video, the release added.

Detectives obtained a search warrant for the Tangerine Drive address, the Sheriff’s Office report pointed out. That led to interviews with the homeowners, who told detectives that Young had been living in the house and dating one of their sons. They also said she was working at the Tasty Home Cookin restaurant in Tuttle Bee Plaza on South Tuttle Avenue in Sarasota, the Sheriff’s Office reported.

“It took approximately 5 hours to sort and inventory” the items recovered from the Tangerine Drive house after detectives first interviewed Young, the report continued.

In the second Higel Avenue case — also in the 4800 block — the victim told detectives that on July 13, someone took his Titleist golf bag and equipment from his unlocked vehicle, which was parked in front of his home, the report noted.

One of the items Young’s boyfriend and his mother turned over to detectives was a Titleist golf bag with clubs and a Bushnell range finder, the Sheriff’s Office reported. The name on a tag on that bag matched the name of the victim, the report added. When detectives arrested Young and showed her a photo of the golf bag, the report continued, “[s]he readily stated that she took the bag ‘from the back of a truck (SUV) on Siesta Key.’”

The report also pointed out that Young earlier had admitted to numerous burglaries in a specific area of Siesta Key during June, July and August.

Among the later cases, the first on Island Circle also was logged on July 13, the report said. It took place in the 400 block, the report added. That victim — who had left his vehicle unlocked in front of his home — told officers that he was missing miscellaneous items of clothing and a “VW embossed roadside emergency kit,” the report said. That kit was found among items in Young’s vehicle, the report added.

The second case on Island Circle case — in the 200 block —occurred on July 13, as well. That victim told officers she, too, had left her vehicle unlocked in front of her home. In this case, the victim said that a child’s violin case, a passport and miscellaneous jewelry were missing. The violin case, with the violin still inside, was among the items recovered from the Tangerine Drive house, that report noted.

In the fourth case — also reported to have occurred on July 13 — the victim, who lives in the 3900 block of Roberts Point Road, told detectives, he, too had left his unlocked vehicle in front of his house. He said an Apple iPad Mini had been removed from it, the report continued. The iPad was recovered from Young’s vehicle, the report noted.

During the Aug. 3 Siesta Key Association meeting, Sgt. Jason Mruczek, leader of the Sheriff’s Office substation on Siesta Key, told members that 10 to 15 burglaries of vehicles had been reported on the north end of the island in recent weeks. He reminded the audience, “Lock your cars; don’t keep anything in plain sight.”