Members welcomed a new president during the 2017 Annual Breakfast Meeting of the Siesta Key Association (SKA). 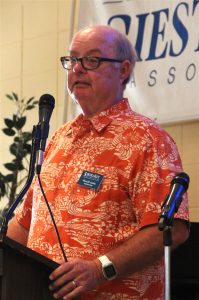 Harold Ashby, who joined the board in early 2016, accepted the gavel from Vice President Catherine Luckner during the March 4 event, which was held at St. Boniface Episcopal Church.

“I didn’t expect that,” Ashby told Luckner as he eyed the gavel. “I didn’t even know there was [one],” he added, drawing laughter from the approximately 145 people present.

Ashby extended his appreciation to Luckner for encouraging him to take the position and for serving as a mentor to him. “It’s a great honor for me to step into these shoes,” he told the audience.

Ashby also recognized Luckner for all the work she has undertaken on behalf of the organization. She joined the board in 2009, she told him. Luckner served as president from 2011 until 2014.

Luckner will remain vice president of the SKA, while acting President Bob Stein will just serve as a director next year. Joyce Kouba will continue as secretary, Kouba reported on behalf of the Nominating Committee, and Bob Miller will remain treasurer. The other directors are Dan Lundy, Joe Volpe and Gene Kusekoski, who just joined the board last month.

The SKA represents all the property owners of Siesta Key, Ashby pointed out. “Most people know us for our activism. We protect Siesta Key’s interests. … But we’re more than that. I’d like to say we make paradise better,” Ashby continued. “Remember that. You will hear it again.”

Among his top goals as the incoming president, Ashby pointed out, is expansion of membership. He extended his appreciation to those present that morning and then added, “We need more of you. Members give us influence; they give us resources.”

Earlier this year, a news release the SKA issued about one of its initiatives said its membership numbered about 1,300 households.

Explaining on March 4 that he is a former accountant, Ashby told the audience he likes statistics, and he had a few to present. Out of all of Siesta’s property owners, he said, 71% do not live on the Key and only 6% of them are SKA members. The goal is to convince all of them that joining the organization is a good investment, he added.

Of all the island’s residents, he continued, 13% are SKA members. “Those numbers are not because we have had a decline in membership,” Ashby said. “They’ve been at that level a long time.”
In fact, he pointed out, “as of about a few weeks ago, we passed last year’s membership [total] for the full year [of 2016]. Our growth has been on a nice upswing.” 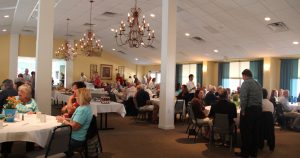 Ashby continued, “We know where they live, and we’re going to hunt ’em down and we are going to convince them that the Siesta Key Association is a good investment. … I predict in two years we are going to have double the membership that we have now.”

If that goal comes to fruition, Ashby added, the SKA will need a bigger place for its annual breakfast meetings, “and we may even have to raise the price of the free breakfast.”
The latter comment drew more laughter.

Among other SKA projects going into its next year, Ashby said,

the SKA will “be front and center on the Siesta Promenade project.” He pointed out that Benderson Development’s plan for the a mixed-use project at the northwest corner of the U.S. 41/Stickney Point Road intersection is going through “the grinder of the CAP process.”

The County Commission on Jan. 25 approved the scope of work Benderson Development must pursue — including detailed traffic studies undertaken during the height of tourist season — as the firm pursues approval of a Critical Area Plan (CAP) for Siesta Promenade, as well as a rezoning of the approximately 24 acres.

Ashby continued, “Of course, we will always advocate for the judicious management of the county’s Comprehensive Plan and the Siesta Key Overlay District.”

The latter is the special zoning district approved in 1999 for the Key, Luckner noted. The SKA was one of the entities that participated in the process that led to its final adoption, she said. The overlay district — referred to by the acronym “SKOD” — governs density and intensity of development on Siesta, she added.

“We also want to push for better pedestrian safety around the island, particularly in [Siesta] Village,” Ashby said.

Yet another major goal, he continued, is to build up the Siesta Key Environmental Defense Fund the SKA established as a 501(c)(3) nonprofit in January.

Earlier, in her remarks, Luckner credited Ashby with originating the idea for that “forever” fund to enable the SKA to take legal action, if necessary, to protect Siesta Key’s environment. Luckner pointed out that when the SKA was founded in 1948, language in its charter called for it to put focus on the island’s environment.

“I will daresay we are probably one of the largest civic organizations of its kind in the state of Florida,” Luckner added.

She referred to the proposal to dredge Big Pass as “a wake-up call.” The Environmental Defense Fund will enable the organization not only to continue to pursue legal challenges of the Florida Department of Environmental Protection’s intent to issue a dredging permit to the city and the USACE, she said, but it also will assist with any other efforts to try to prevent potential harm to the Key.

“We hope that you will donate if you’re able,” Luckner told the audience: “Twenty-five dollars here; $10 there.” None of it will be spent for any purpose except legal action on behalf of the island’s residents, she stressed. No money will go to marketing the SKA, for example, she pointed out.