With Sarasota County’s Planning Services Manager having explained the unusual path leading to that point, the County Commission agreed unanimously on Dec. 14 to approve a residential plan with less density on about 13.3 acres fronting Little Sarasota Bay. The project is called Cassia Cay. 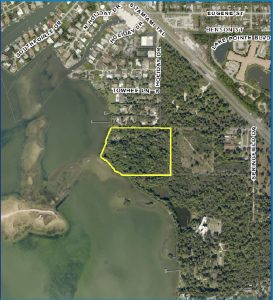 Instead of the 152 condominium units allowed under a concept the board authorized in 2006, the latest proposal calls for 98. The building heights would be a mix of 45, 56 and 68 feet, with in-structure parking, according to the application. The height of the buildings in the 2006 plan would be a maximum of 55 feet, the county staff report showed.

In making the Dec. 14 motion to endorse the 2016 concept, Commissioner Charles Hines said, “I just like this version of the plan better. … I think it’s a better product for the area.”

In response to a question from Vice Chair Paul Caragiulo, attorney Brenda Patten of the Sarasota firm Berlin, Patten & Ebling — representing the developer — pointed out that someone could submit a site and development plan to county staff for the original 152-unit proposal and then construct it, with “no further approval from the [county] Planning Commission or the Board of County Commissioners. … We’re coming in with an alternate plan that reduces the units to 98, so we’re shrinking the impact of the traffic, everything …”

The project site is south of Siesta Key and immediately adjacent to the Holiday Harbor community on Holiday Drive.

At the outset of the public hearing, county Planning Manager Tate Taylor explained that the applicant was seeking approval of the new concept plan while maintaining the option of pursuing the 2006 version. “The applicant will decide which one it wants to go forward with.”

The Office of the County Attorney “affirmed that this was a lawful process,” Taylor added. Still, this has been the first time he has seen this type of approach in his 30-plus years with the county, he said. “Processing it was a bit of a challenge for staff.”

Taylor also told the board that, unless it provided guidance for the same type of initiative to be pursued with a future project, staff would not allow other applicants to follow this pattern.

Dan Bailey, an attorney with the Williams Parker firm in Sarasota and a representative of the current owner of the property — Bayonne LLC — explained that his client has contracted to sell the land to Apogee Realty Advisors, based in Naples. Bayonne’s multiple owners had planned to construct the project as detailed in the 2006 concept plan, Bailey continued, “and they still like it. Intervening was a recession. … It caused a 10-year gap here.”

“In the event there’s some snafu in the closing [on the land],” Bailey pointed out, his clients “don’t want to do someone else’s plan.”

He apologized for the complexity of the situation, but he pointed out that Deputy County Attorney Alan Roddy had included language in the application to make it clear that if the County Commission did not approve the new site plan, the petitioner would have to withdraw it. “I would hope you would see your county attorney has fully protected you with this language,” Bailey said.

“It is different,” Chair Alan Maio responded. “I thought I’d seen it all.”

Maio did ask for clarification that if Bayonne successfully sells the property to Apogee, “the original plan, the entitlements, are extinguished?”

“They go away,” Bailey replied, as soon as the new site plan has been submitted to county staff. “That’s in the ordinance Alan [Roddy] put together.” Maio thanked him for the explanation.

Although Apogee Realty Advisors plans to purchase the property, the application shows, the developer would be Kevin Daves of Core Development Inc. of Wichita, Kan. Daves was also on the team that developed the Ritz-Carlton project in downtown Sarasota and The Concession golf club community.

In spite of the reduced density, four speakers during the public hearing cited an array of concerns, especially that the project will lead to further traffic congestion along U.S. 41.

County Planner Adriana Trujillo-Villa pointed out that two of eight stipulations attached to the site plan specifically regard improvements that must be made to ease access to and from U.S. 41:

• No. 3: “Prior to or concurrent with development of the subject parcel, the developer shall extend the existing southbound to eastbound left turn lane on U.S. 41 at Lake Pointe Boulevard/Springfield Drive.”

• No. 4. “Prior to or concurrent with development of the subject parcel, the developer shall construct a northbound to westbound directional left turn lane … at the proposed project driveway and U.S. 41 intersection.”

Patten told the county commissioners that she believed the speakers were confusing the proposal before them with a plan for a mixed-use development along U.S. 41, which originally was designed to border the residential community. However, the application for that mixed-use project has been withdrawn, she noted.

Ruth Brandwein, who lives in the nearby Pelican Cove community, told the board she had 250 signatures on petitions opposed to Cassia Cay. She pointed out that the property “is the last undeveloped parcel on [Little Sarasota] Bay.”

Patten also referenced a concern Pelican Cove residents had raised about the proximity of the residential structures to the bay. Patten explained that because of setbacks required by the County Code, no building would stand closer to the shoreline than 130 feet.

Brandwein further voiced worries about the potential that Native American burial grounds exist on the site, though archaeological surveys by a private firm and the county found none. If any are found during construction, Brandwein pointed out, the project will have to be stopped, and further investigation will have to be conducted every 25 meters as the digging proceeds.

Patten told the board, “There are no Indian middens on this site.” She also affirmed that the county’s land development regulations would halt construction if any remains were found.