Holiday trash, embracing for the month of July

Sarasota County Commissioner Alan Maio told SKA members during their June regular meeting that he and his colleagues on the board had received emails — and he already had talked with staff — about the Memorial Day garbage “from our visitors.”

He commended representatives of Siesta organizations — including the SKA — and “citizen volunteers” for their hard work on May 31, helping clean up the beach and putting bags of the debris in “big roll-off dumpsters.”

Maio readily acknowledged that people can be most inconsiderate about their disposal of trash. “They just drop stuff when they’re done with it.”

One member of the SKA board told him last year, he continued, that half a case of raw hamburger was left on the beach following one big holiday weekend. Apparently, the people who bought the meat cooked what they needed and just “left the rest rotting in the sun,” Maio said.

Noting that Sarasota County Sheriff’s Office deputies were standing in the back of the room, he added that his son is a deputy, too. “If I were king,” Maio said, sparking a wave of laughter among the audience members, “I’d have a deputy follow every one of the people visiting. … Obviously, I’m being silly; that can’t happen.”

Speaking again of county staff, Maio told the SKA members, “We’re doing the best we can.”

Sgt. Jason Mruczek of the Sheriff’s Office told the attendees that Deputy Chris McGregor, who has worked on the island for 18 or 19 years, reported Memorial Day this year was “probably the busiest he’s seen …”

The weekend for deputies “was extremely busy,” Mruczek said, prompting titters of laugher among audience members.

Michael Shay, a long-time volunteer who organizes cleanup efforts on the Key under the auspices of Keep Sarasota County Beautiful, shared a response he received from Carolyn Brown, director of the county’s Parks, Recreation and Natural Resources Department, about the garbage. He had asked whether county staff would be willing to revisit an initiative he tried to start when he was serving as SKA president: a proposal for the county to install plastic bag dispensers at the beach accesses, to encourage visitors to dispose of their garbage as they leave the beaches.

Brown wrote Shay, “For every holiday, we order additional dumpsters, put out additional trash cans which are collected many times throughout the day and bring on additional staff resources. We have been discussing the circumstances from Memorial Day and do have plans to distribute garbage bags to beach patrons as they enter the beach. We also plan to launch a campaign to educate the public and provide awareness of the importance of maintaining a clean beach environment.”

Shay also reported that he has a group of seven signed up for the Liberty Litter Cleanup scheduled for 7 a.m. on July 5 on Siesta Beach.

Brown noted in her response to Shay that Keep Sarasota County Beautiful expects to have hundreds of volunteers assisting with that July 5 undertaking on county beaches. “We will be diligent in our efforts and continue to evaluate and make adjustments to trash collection as well as educate the public to protect our beautiful resources; however, it is truly the responsibility of the park users to clean up after themselves,” Brown concluded her email.

On a related topic … 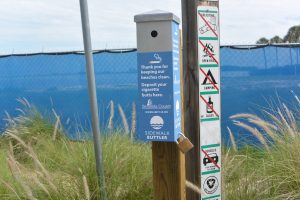 During his remarks at the SKA meeting, Commissioner Maio also announced that over the previous two weeks, county staff began installing 40 cigarette butt receptacles on Siesta and Turtle beaches in an effort to keep the shoreline free of that type of trash.

Keep Sarasota County Beautiful received $5,000 in the form of a 2017 Cigarette Litter Prevention Program Grant from the national nonprofit Keep America Beautiful, which is paying for the receptacles, county staff announced in May.

Maio pointed out that “thousands of cigarette butts” are being left on Siesta’s beaches.

Michael Shay, the long-time leader of cleanup efforts on the Key, led a group in March in counting butts at the county’s request; they collected a total of 2,981 in two hours near the pavilion on Siesta Public Beach.

In concluding remarks on a variety of topics during the June SKA meeting, Maio said, “Put your cigarette butts in the beautiful new, free boxes we got with a grant.”

Just a day later, Shay emailed a photo of one of the receptacles, which had been installed at the beach access west of the Givens Street intersection with Ocean Boulevard. He noted that it has a lock on it, so someone on county staff will have to empty it.