Village gets recycling containers at last

For years, Michael Shay has been yearning to see recycling containers installed in Siesta Village.

As maintenance manager for the Siesta Key Village Maintenance Corp., he has spent considerable time scouting out locations where people routinely throw cans and water bottles into the garbage. Yet, because the contract the County Commission approved with Buccaneer Landscape Management in August 2014 included no provision for recycling, Shay learned that recycling could not be added to the firm’s responsibilities. The Maintenance Corp. — which supervises and pays for the Village upkeep through an assessment on property owners — would have to wait until that contract ended and ask to get recycling included in the new one.

Finally, with county Procurement Department staff working on a new vendor contract — recycling was ready to begin the first full week of October in Siesta Village. 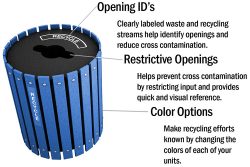 The bins — clearly marked for bottles and cans — have been placed at the Daiquiri Deck, Gilligan’s Island Bar, The Beach Club, Davidson’s and the gazebo. They stand next to the regular garbage containers, he noted.

“We’re starting with five,” he said. “The intent is if it goes well … and we find other areas [where they should be installed], we’ll get more pails.”

The contract does not specify a finite number, he added.

“If we find a pail is completely empty” over time, he noted, and recyclables appear to be plentiful in a garbage can at another location, then staff has the flexibility to move one of the recycling bins to a different spot.

Staff told him to expect the delivery of the first five bins on Oct. 4. They were to be “fully assembled,” Shay said. Staff members planned to notify him about the time they expected to arrive at the Village, he added, so he could assist in making certain the containers were installed in the designated spots.

During the quarterly meeting of the Siesta Key Chamber of Commerce held in August , Shay reported, “The containers are going to be very standard, labeled recycling containers,” with signage stating they are for bottles and cans. They will have openings designed to prevent other types of items from being deposited in them, he noted, such as pizza boxes. “Though I guarantee you someone will try [to put a pizza box in one] and someone will get it done.”

As he listed the locations, he said that in his research, he found “a gazillion [water] bottles [in the garbage can] outside The Beach Club,” which made that seem an excellent location for one recycling bin.

He asked the Chamber for help in publicizing the recycling initiative, pointing out that education will be a key to the program’s success. Lisa Cece, the county’s special district coordinator, who works with the Maintenance Corp., pointed out that the county has educational posters that could be used, as well.

Information about the program could be added to the Chamber website, Chair Mark Smith responded.

“No question that you’re still going to have [recyclable goods] in the trash,” Shay said in the interview. That will be no different, he added, than finding trash on the ground in spite of the fact that garbage cans are located in many Village locations.

The only unresolved issue when Shay spoke on Oct. 2 related to collection of the materials. Waste Management picks up the garbage in the Village, he pointed out. However, county staff has told him that he needed to call each of the five firms approved by the county for recycling contracts and obtain information from the companies to assist county staff in settling on which will handle the Village materials. The plan is for a company to pick up the recyclables from the enclosure in the Municipal Parking Lot, where the garbage is placed for Waste Management.

The vendor that ultimately will be awarded the new Village custodial contract will collect all the recyclables from the containers in the Village and then place the materials in bags for storage in two 96-gallon bins in the enclosure in the parking lot, he explained.

If the recycling initiative becomes really popular in the Village, Shay added, it might be necessary to find another location that would be able to accommodate more materials between collections than the two 96-gallon bins can hold. “We have to keep an eye on that.”