In voting unanimously on Jan. 11 to approve the construction of a chickee hut over a deck that stands 105 feet seaward of the county’s Gulf Beach Setback Line (GBSL), Sarasota County commissioners also indicated they would consider amending county regulations to allow staff to provide permits for such an amenity in the future without the need for board action. 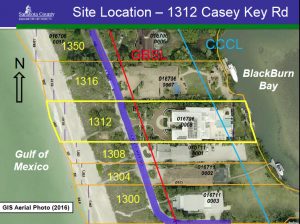 The property owners in this case — Howard Todd Stitzer and his wife, Marenda A. Brown-Stitzer, of 1312 Casey Key Road in Nokomis — had erected a hut to cover their deck on the Gulf of Mexico side of Casey Key Road before learning from county staff that the County Commission had to issue a variance for such a structure. The couple promptly removed the chickee hut and, in May 2016, applied for a Coastal Setback Variance to put it back up.

Commissioner Charles Hines pointed out that the board previously has approved concrete swimming pools seaward of the GBSL. Referring to the chickee hut, he added, “This is less intrusive,” and it is not a structure in which a person will live. “If it gets blown down in [a] storm, so what. … There’s no harm to the public here.”

He said he planned to follow up with county staff members to learn the potential cost of their time in providing administrative approval of such structures, so a petitioner would not have to apply for County Commission approval of a Coastal Setback Variance.

Hines pointed out that he has been one of the staunchest proponents of making sure development projects adhere to the intent of the GBSL, which is to protect coastal property owners and the environment. Still, he said, “This is a difficult process to go through … to add an amenity that is really something very nice.”

Hines also noted that a County Commission meeting is the only forum in which he can offer comments about a potential change in county regulations. “So thanks for letting me preach a little bit.”

“We don’t get to talk like this [outside of board meetings],” Commissioner Alan Maio agreed, “because we [would] break all sorts of rules.” Maio then told Hines, “You weren’t preaching; you’re dead on.”

If staff came back to the board with a proposed recommendation for amending the county’s regulations, Maio continued, “I would certainly support that.”

Before making the motion to grant the Stitzers’ request, however, Commissioner Mike Moran asked County Attorney Stephen DeMarsh whether allowing the chickee hut would set a bad precedent for the board.

“First of all,” DeMarsh began, “each property is to be evaluated on its own [circumstances].” The primary consideration in this case, he continued, was whether the chickee hut would be the minimum type of structure the Stitzers could build beyond the GBSL and still enjoy reasonable use of their property. It was possible, DeMarsh pointed out, that if the commission approved the variance, future applicants could petition for similar structures.

“It’s a commonsense thing,” Commissioner Nancy Detert said of the chickee hut. She apologized to the Stitzers’ attorney, Ralph Tirabassi of the Fergeson Skipper firm in Sarasota, for interrupting him earlier. As Tirabassi continued to speak after apparently failing to hear the beep signaling the end of the applicant’s 20-minute presentation period, Detert had told him, “You’re overselling.”

Still, as the board members discussed the request, Detert said she, too, was concerned about setting an inappropriate precedent. “Should we have some sort of policy where we’re not going to get into approving [a] toolshed … How far do you go with this stuff?”

“I don’t think this happens very frequently,” DeMarsh replied, referring to Coastal Setback Variance requests. “This is a lengthy and expensive process … I just want to let you know that your staff does have authority to issue approvals for more minor things.”

In his remarks to the board during the public hearing, Stitzer explained that in 2014, he and his wife built their house on Casey Key. “We sought to create an aesthetically pleasing building and landscaping in accordance with applicable laws and regulations, in keeping with Casey Key’s very natural, island-like environment.”

In his report, Weiqi Lin of the county’s Environmental Planning Division explained that the couple’s property extends from the gulf to the bay. County staff awarded the Stitzers permits for a dune walkover and the wooden deck in late 2014, Lin added.

During the winter season of 2014-15, Stitzer told the commission, “We repeatedly found that our family could spend only limited time during prime daylight hours using the beach due to lack of shade and the very strong sunlight.” His grandchildren — ages 3 and 1 — are “quite fair-skinned,” he continued. “Copious amounts of sunscreen” and umbrellas just did not solve the problem, Stitzer said; yet, retreating to the house across the road “kind of destroys the concept of a day at the beach.”

Stitzer added, “We then researched appropriate structures to cover our previously permitted observation deck and believed, in good faith, we’d found an aesthetically pleasing, island-like natural structure that we were told could be constructed without a building permit under relevant provisions of Florida state law; in short, a chickee hut.”

The state statutes indicated that a chickee hut was allowed in any place as long as it was built by Seminole Indians and consisted only of wood and palm or palmetto fronds, Stitzer’s attorney, Tirabassi explained.

“Marenda and I would like to emphasize how important the beauty of Casey Key is to us,” Stitzer told the board. “Our goal is to add the simplest form of structure: four poles and a thatched roof.”

The total linear footage of the dune walkover and deck is 3,700 feet, Tirabassi noted. The chickee hut would add only about 300 feet of wooden material to the area seaward of the GBSL.

106-home development to be constructed in Gulf Gate