The Sarasota County commissioners recently — and readily — approved a request by the director of the county’s Parks, Recreation and Natural Resources Department for the continuation of a particular funding stream to help pay for beach maintenance.

During the board’s April 26 regular meeting in Sarasota, Carolyn Brown explained that, in accord with a county ordinance, every two years she must request the apportioning of extra funding out of Tourist Development Tax revenue to cover a variety of activities designed to keep the beach parks clean and appealing to visitors and residents. 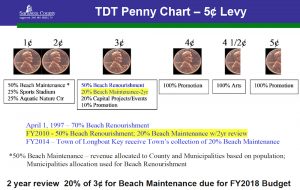 Officially, the ordinance calls for collections representing 20% of the third penny of each dollar of Tourist Development Tax revenue (TDT) to go toward beach maintenance, she pointed out. In her department’s budget for the 2017 fiscal year, she noted, that revenue stream accounts for $679,976. For the 2018 fiscal year, the estimated revenue is $736,049.

The county charges a 5% “bed tax,” with percentages of each one of the five pennies dedicated to certain expenses.

For the current fiscal year, Brown continued, her department’s total allocation for beach maintenance out of TDT revenue is $3,629,000, and the overall expense for the work has been projected at slightly more than $4 million. (Another portion of TDT revenue also is dedicated to beach upkeep.)

“If we were to lose that 20% of [third-penny] funding,” she pointed out, visitors to the beach parks would see “overflowing trash cans, unsightly restrooms, lack of customer service and [staff] supervision, and loss of resources to support events and loss of vehicles. … The implications could truly be catastrophic to our tourism and would have an impact on … the services that we are able to provide.”

For example, the county would not be able to support events such as the annual Crystal Classic International Sand Sculpting Festival on Siesta Key or beach volleyball tournaments, according to a slide she showed the board. Furthermore, staff would be unable to clear obstructions to the shoreline, groom the beaches regularly, remove debris such as red drift algae and dead fish during red tide events, or erect information signage related to special events, she added.

Altogether, the TDT revenue pays for maintenance at 14 county beaches, she said, including Siesta, Lido, Caspersen, Manasota and Venice, as well as the 13 accesses on Siesta Key.

An April 26 memo from Brown to the County Commission explained that on March 18, 2009, the board requested a report on beach maintenance initiatives paid for by the county’s General Fund instead of TDT revenue. (The General Fund largely is comprised of property tax revenue the county receives each year.) As a result of that review, the memo notes, on June 12, 2009, the commission cast the original vote to allocate another portion of TDT revenue to beach maintenance. During the recession, board members and staff worked to find sources other than the General Fund to cover expenses, and the board report made it clear that the TDT ordinance would enable them to use some of that revenue for beach upkeep.

On March 23, when Brown sought the county’s Tourist Development Council’s endorsement of the renewed allocation, the members did so unanimously, recommending the County Commission follow suit.

During her presentation, Brown also showed the commissioners numerous scenes from beaches all over the county. “You could virtually go on vacation right here in your own back yard, visiting each and every beach, and have a different experience each and every day,” she pointed out.

“We have an incredibly dedicated staff,” Brown told the board. “They’re out there doing their best every day, and conditions are not always the best.”

Following Brown’s presentation, Commissioner Nancy Detert told her, “You certainly made your case, so I am happy to move approval [of the renewal of the TDT allocation].”

Commissioner Alan Maio, who seconded the motion, pointed out that he and his wife, Nancy, “took a quick ride [over the previous weekend] through Venice and the jetties and Nokomis and the jetties and Siesta Beach … I was looking for things to be cranky about,” he joked, “[but] everything looked just perfect, so thank you.”

Even the road to the North Jetty, he noted, which has proven to be “a bumpy ride” in the past, was “groomed very well,” he said, “and the trash cans were emptied.”

The unanimous vote to continue the TDT third-penny allocation came less than 10 minutes after Brown stepped to the podium to make her case for its reauthorization.