It took last-minute assurances from the county staff that further studies that would be expected of Benderson Development — plus agreement that the Sarasota County Commission could hold a workshop on those matters. But approximately five hours and 45 minutes after they began the agenda item, the commissioners voted unanimously on Oct. 11 to continue a public hearing on Benderson’s request for approval of the formal boundary of its proposed Siesta Promenade project.

“We will get back to the commission in a report form” the details about what all those expectations of Benderson are, county Planning Division Manager Allen Parsons told the board. The studies also will involve the “impact area,” he added: the adjacent neighborhood and other nearby properties that will be expected to deal with more traffic, for example, if the project moves forward.

Commission Chair Al Maio made it clear that he did not want the hearing to be continued for a long time. “I am not going to be a big fan of a gigantic delay.” “We understand the importance of this,” responded Assistant County Administrator Steve Botelho, who was sitting in for County Administrator Tom Harmer.

Then Parsons pointed out, “Timing is actually just dependent on working through the process [of a Critical Area Plan application].” The various staff members reviewing the materials Benderson has submitted have to complete their efforts, Parsons added, holding up an inches-thick notebook indicating all the various aspects of those reviews. 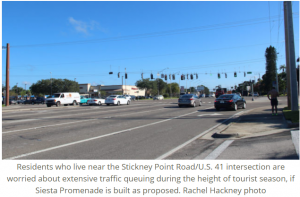 During his final remarks, Mathes told the board, “Frankly, regardless of the outcome [of the hearing], we’re not going to stop putting time and effort into trying to build a project that makes sense for the community, no matter what direction it takes.” He added that he and the Benderson staff “take seriously” all the concerns that have been expressed. “Redevelopment of properties in our urban service area takes work. … And that’s what this project is.”

During his initial presentation on Oct. 11, Mathes said, “What I’m asking is that you designate the boundary. If you do that, it takes away the uncertainty of not knowing where the boundary will end up.”

In making his motion for the continuance, Commissioner Charles Hines indicated that it should be clear from the commissioners’ comments that they are willing to allow the project to go forward. Otherwise, Hines pointed out, “this conversation would have been over an hour-and-a-half ago.”

Maio also referenced changes implemented by the Florida Legislature in 2011 and 2012 that limit a local government board in what it can require a developer with a rezoning petition to do to improve the handling of traffic a project is expected to generate. The CAP process, he added, does give the commission more leeway in making demands upon a developer.

Sura Kochman, a member of the Pine Shores Neighborhood Alliance who has served as a liaison between that group and county and Benderson representatives, was among numerous public speakers who implored the board to deny the boundary request, citing numerous county future land use policies that she said the project would violate. Among them is Policy 1.2, which calls for the protection of the “quality and integrity of established neighborhoods from adjacent incompatible development.” “This is not a compatible use,” she said of Siesta Promenade.

After the board vote, Kochman told SNL in an email that she was disappointed that the County Commission did not deny the CAP boundary, “but encouraged by the BCC not ‘rubber stamping’ an approval. [The commissioners] seemed genuinely interested in trying to get more information and studies on all aspects involved in the CAP as a whole.”

Altogether, 47 people signed up to address the board on Oct. 11. By my count, 34 of them did make comments, with the vast majority opposed to the project.

“This is a pioneering project that is presented to you this morning,” Parsons told the board at the outset of his Oct. 11 presentation. Benderson’s application is the first to make use of higher densities available under the CAP policy the county adopted in 2005, Parsons added.

That CAP designation allows the firm to seek density up to 25 units per acre. If it pursued rezoning of the property to the Commercial General designation county staff long had figured on for that site, Benderson would be restricted to 13 units per acre.

Mathes explained that when Benderson bought the property in 2005, it was the site of “an aging and rundown mobile home park, a gas station and dilapidated office buildings. We cleaned the property out.”

County documentation shows the site has been considered for a CAP for 10 years, Mathes added. Benderson has not finalized its plans for the property, he continued. However, at its maximum, the CAP will allow “somewhere between 100 and 200” additional dwelling units and limit the commercial intensity,” he said. If the County Commission ultimately approves the CAP, Mathes continued, the firm probably will not end up with 25 units per acre, “based on the work that we’ve done.” “The upper limits [of density under a CAP], I’m not a fan of,” Maio said at one point.

In the application it filed with the county’s Planning and Development Services Department in August, Benderson proposed up to 140,000 square feet of retail space, a 150-room hotel and 506 multi-family units. In recent weeks, Mathes has shown various groups a revised plan with about 400 dwelling units, two smaller hotels and the same amount of retail space.