Mike Granthon and The Beach Club

Mike Granthon has been running restaurants and bars since he was 15. Along with his partner, Chris Brown, he is now co-owner of The Beach Club as well as The Hub, The Cottage, and a soon-to-be-opened high-end restaurant, yet unnamed.  Located at the former site of Aaron’s Fish Camp, the new restaurant will feature spectacular offerings such as aged steaks on Himalayan Rock Salt. They hope to open in December of 2017, but all that depends on the completion of the building’s renovation.

Mike and Chris’s three restaurants are within steps of each other.  The Hub has a “Baja California” vibe, which invites t-shirts and sandals, while The Cottage features world cuisine served in a rustic setting. The Beach Club is the beach bar with attitude! They have recently started serving Bar & Grill Pub food, things such as: Nachos, Mozzarella sticks, Parmesan Chicken, Buffalo Chicken, Funnel Cake Fries with Peanut Butter and Jelly toppings. They have also added servers to bring it to your table. Says Mike: “Food is important to us. A lot of stuff is made right on the premises. Here, customers can see a pizza pie being thrown in the air.”

Open from noon to 2:30 a.m., The Beach Club offers dancing in a laid-back, party atmosphere. More than a decade ago The Beach Club had morphed into a full-service restaurant. When Mike and Chris took it over; however, they returned it to what it originally was: a bar, complete with a long and welcoming Happy Hour which runs from noon to 7 p.m. daily. 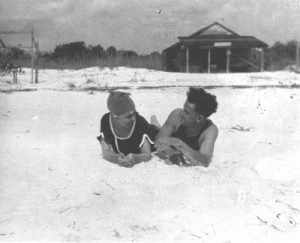 Siesta Key has a long and colorful history. A 1918 photo shows the first couple allowed to go to Siesta Beach to sunbathe. (They didn’t catch many rays in those cover-up swimsuits!) Move forward a quarter century, and Sarasota/Bradenton Airport was turned into a World War II air base. Mike has been told by old-timers that planes used to land right on the crystal sands of Siesta Beach.

The Beach Club came into being after the war, and has existed in Siesta Village for 70 fabulous years! Famed for its live music, Burt Englishman—a Sarasota local musician— has this tale to tell: “Gregg Allman and Dickey Betts have both sat in at The Beach Club. I played with The Gregg Allman Band in ’82 and ’83, and the whole band was in there at one time, but we didn’t end up playing as a band.” You can see the group performing in the photo.

Today’s Beach Club features name performers like Eddie Money, hot local bands such as the FUNKTASTICS, southern singers like Marshall Tucker and Molly Hatchett, and Reggae bands such as INNER CIRCLE, famed for their signature rendition of “Bad Boys, Bad Boys”. Some of the hottest DJ’s in the area play there 7 nights a week, inviting action on the spacious dance floor. Mike and Chris are the guys who choose the sound, and they draw from an eclectic variety of bands and nightclub acts.  The famed Musical Comedy show, “Pete and Wayne” from Key West, was recently featured on The Beach Club stage, much to the delight of audiences.

Now a days, The Beach Club is abuzz with action! In addition to live music, there are pool tables and over 30 television sets tuned to various sports channels. Special events are planned, such as the ANNUAL SEXY SCHOOL GIRL PARTY on August 9, at which all ladies drink free after 9 pm. A contest is held to determine the sexiest school girl of the evening, with $1000 being awarded in cash and prizes.

“We want to maintain the history of the Village as well as the quality of our beautiful beaches,” says Mike. In keeping with that philosophy, every 5th of July, Mike, Chris, and all their employees go out to help rid Siesta Key beaches of any clutter left in the wake of Independence Day Celebrations. It’s a big community event, and the Beach Club crowd is happy to contribute time and effort to keep our world-class beaches pristine.

Open daily, a visit to Sarasota would not be complete without a visit to the Key’s iconic Beach Club. Located at 5151 Ocean Blvd, it is open from noon to 2:30 am. For information about bands and Special Events, check out the website: www.beachclubsiestakey.com

Call it a ‘debriefing’ about the Fourth