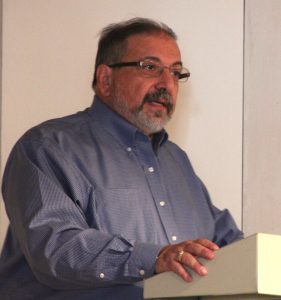 Sarasota County Commissioner Alan Maio reassured about 40 people during the Jan. 17 Siesta Key Condominium Council meeting that he remains committed to protecting Siesta Key as the City of Sarasota and the U.S. Army Corps of Engineers (USACE) proceed with plans to dredge Big Sarasota Pass to renourish South Lido Key.

Referring to the county commissioners, Maio told the audience at Siesta Chapel, “We have said from the beginning … [that] nobody means to hurt Lido, but any replenishment plan cannot come by harming Siesta.”

“I said from my first day in office,” Maio continued, “‘Where the hell is Plan B?’” Regarding their proposal to remove about 1.2 million cubic yards of sand from the pass, he said, he asked city leaders, “‘How could you think anybody’s going to allow that to happen?’” His follow-up query focused on their lack of an incremental plan “to save buildings where the water was lapping at them,” he pointed out. “And I never got an answer, and our [county] staff never got an answer.”

The Florida Department of Environmental Protection (FDEP) issued a Notice of Intent on Dec. 22, 2016, that it plans to issue a permit to the city and the USACE to enable them to dredge the pass to renourish about 1.6 miles of South Lido Beach.

Maio then referred to the fact that the commission did not vote to take any action after hearing a Jan. 10 staff update on the issue. “We let things proceed as they’re proceeding. We’re not stupid.” Noting the administrative appeals submitted to FDEP by three nonprofit organizations, he added, “At any time, the county could join that appeal — when three of the five commissioners decide to do that, not before.”

Maio also reminded the audience, “This is going to be a long process.”

When the USACE originally unveiled the Lido Renourishment Project, Maio pointed out, USACE officials insisted that three groins would have to be built on South Lido to hold the sand in place between subsequent renourishments. “The pressure of citizens crying out,” he said, led the federal agency to redesign the project with two groins. “I don’t know what kind of science that is,” he added. “In a matter of weeks this all changed.”

The potential for a new hotel

Maio also took questions from audience members regarding the proposed Comprehensive Plan amendment that could lead to construction of a new hotel on the island on property already zoned Commercial General.

Siesta resident Lourdes Ramirez, who was one of Maio’s opponents in the 2014 County Commission race for District 4, said she wanted Maio’s view on the potential for increased density and intensity on the island, if the amendment ultimately were approved.

A hotel would add a burden to the island’s infrastructure, she pointed out.

“You always have a good grasp of the situation,” Maio told Ramirez, “but you’re not going to back me into that corner. I will tell you what I feel when I hear what [the proponent of the amendment] is doing. … So, Lourdes, with all due respect, [I am] not answering that one … till I hear what they have.”

Representatives of Dr. Gary Kompothecras, a Siesta resident best known for his “1-800-Ask-Gary” advertising campaign for his clinics, said during a Dec. 7, 2016 workshop on the Key that their client is interested in building a boutique hotel. Ramirez noted during the Condo Council meeting that current zoning on the island allows up to 26 hotel units per acre and a height of 35 feet.

In response to another question, Maio explained that in years past, April 15 was the deadline for all entities to submit proposed Comprehensive Plan amendments to county staff. “If you didn’t [meet that deadline], tough luck”; a person would have to wait until the next year.

Then commissioners agreed that the process resulted in “piling everything on staff at once,” he said, “all to be heard [by the board] in a short period of time.” Therefore, he continued, the commission changed the process so anyone could submit a proposed amendment at any time. All the Jan. 10 board vote authorized, he said, was for staff to start the process sooner on this particular amendment.

Ed Kroninger, a resident of the Marina Del Sol condominium complex on Old Stickney Point Road, asked Frank Jurenka, the Condo Council president, whether that group has taken a position on the issue.

“We discussed this at our last board meeting,” Jurenka replied. The decision was that “it was premature for us to do anything at this particular time.” Nonetheless, Jurenka said, the consensus was “that we would be violently against this change [in density on the island].”

“Perception means a lot,” another Marina Del Sol resident, Robert Sax, told Maio. During the Jan. 10 County Commission meeting, Sax reminded Maio, “You, sir, seconded the motion to allow this [amendment process] to move forward to the next phase.”

Even though Maio had explained that the amendment could have been filed anyway in April, Sax noted, Commissioner Nancy Detert “saw fit … to cast a ‘No’ vote,” because she wanted more information on the project behind the proposed amendment. “You’re supposed to be in our corner,” Sax told Maio.

“I am in your corner,” Maio replied. All he voted for, he reiterated, was to allow the process to start earlier.

“It sends a signal,” Sax said.

“No, it doesn’t,” Maio responded. “How Commissioner Detert votes is her business. [Three] of us felt differently.” (Commissioner Charles Hines had not arrived at the board meeting prior to that discussion.)