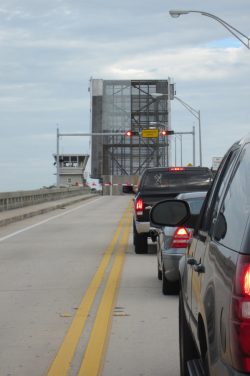 Early on the morning of Sept. 6, the U.S. Coast Guard announced that it will indeed be reducing the number of openings of the north Siesta Key drawbridge and the Stickney Point Road drawbridge from three times an hour to twice an hour.

The change will go into effect on Oct. 5, the Coast Guard notice added, with the new rule to be in effect year-round.

Reductions in openings also will be in effect for the Cortez and Anna Maria drawbridges, the Coast Guard said.

The timing of the openings for all four bridges has been adjusted to facilitate smooth transit for vessels navigating the affected waterways, the rule explains.

“The request was made to the Coast Guard to change the operation of four drawbridges due to an increase in vehicle traffic throughout these areas at all times of the year,” the notice points out.

The proposed rule was posted by the Coast Guard on Feb. 13; the comment period closed on April 14. Altogether, members of the public offered 125 comments. Many of those who took the opportunity to express their views were residents and business owners on Siesta Key. The vast majority supported the reduction in the number of bridge openings, especially given the extent of traffic congestion on Siesta during season.

Greetings From the Gulf: January