On a unanimous vote, the Sarasota County Commission has granted a permit for the addition of 2 feet to the height of the approximately 350-foot-long seawall on the property slated for the six-unit Oceane condominium complex on Ocean Boulevard on Siesta Key. The development will face Big Sarasota Pass.

The project will enable the future residents to cut their flood insurance bills by 50% or more, William Merrill III, the attorney representing the applicant, told the board during a Nov. 14 public hearing.

The property at the heart of the discussion is owned by CG Oceane LLC, whose principal is Randy Moore, managing partner of Crossgate Partners in Suwanee, Ga., state and county records show. 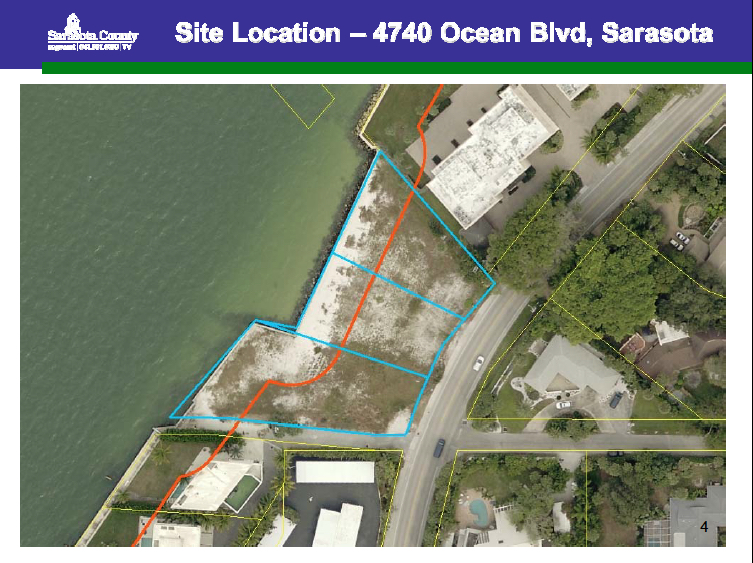 Discussion did ensue over the request of Windward Passage condominium homeowners to extend the extra height to a short section of their property’s seawall. A slide provided to the commissioners showed the junction of the Oceane seawall and the Windward Passage seawall, on the northwest corner of the Oceane property. The extra height on that part of their wall would provide their site more protection in the event of a major storm, spokesman David Soltis told the commissioners.

However, County Attorney Stephen DeMarsh explained that if CG Oceane LLC were agreeable to working with the Windward Passage residents on that, the public hearing would have to be continued, so the firm and the condo complex could pursue the project as co-applicants. That was because the advertisement for the Nov. 14 public hearing did not include any details about improvements to the Windward Passage seawall, DeMarsh pointed out.

Ultimately, Merrill told the board that his client is willing to pay for the extra height on part of the Windward Passage seawall, but his client did not want to continue the hearing.

In response to commission questions, DeMarsh also said the board could not require the addition of a stipulation in the county permit that CG Oceane pay for the Windward Passage work.

Merrill told the commissioners that the construction of the condominium complex has been delayed since April as the project team worked on Federal Emergency Management Agency (FEMA) flood zone issues. While he conceded that it was not an emergency situation, Merrill said it was critical for CG Oceane to move forward with its $24-million project on Big Pass. “What we don’t want to do is continue this [hearing]. We can’t do that. … This project has been delayed specifically because of this one issue.”

The team has complied with FEMA requests for the technical data related to the Oceane seawall plans, Merrill pointed out. “We should be receiving that [FEMA] approval any day now [for the project].”

In response to the Windward Passage residents’ concerns, Elizabeth Fountain, a coastal engineer with J.R. Evans Engineering of Estero, also explained that the project team had to go through a technical analysis with FEMA, showing that the added height to the seawall would not have a detrimental impact on adjoining properties. “We satisfied [FEMA’s] concerns.”

Merrill also pointed out that the Siesta Towers condominium complex to the south of the Oceane site has a seawall “similar to what we propose today. … There’s been no erosion” on the Oceane property or on a segment of Givens Street between the two pieces of property, he said.

Nonetheless, Commissioners Charles Hines and Alan Maio expressed optimism that the two property owners would cooperate on the Windward Passage seawall, as Merrill had indicated. They voiced disappointment that the proffer for Oceane to pay for the work could not be incorporated into the motion Commissioner Michael Moran made to approve the Oceane project.

Hines pointed out that the board recently has heard complaints from constituents about situations in which stormwater runoff associated with new development has led to problems on adjacent land, in spite of expert testimony in public hearings that such problems would not arise. “We get blamed,” he said of the commissioners.

“I was hoping to find a compromise here today to avoid that [potential for problems at the Windward Passage complex],” he added.

“I thought it was a very thorough presentation,” Moran said. The applicant’s offer to pay for the extra height for part of the Windward Passage seawall “was very fair” and a much better way to handle the situation, Moran added. “Hopefully, we can have some good neighbor experience here.”

In his presentation, Howard Berna, the county’s environmental permitting manager, explained that the planned Oceane condominium project already has the necessary Coastal Setback Variance and a staff-approved site and development plan. However, county regulations do not allow staff to handle a request for a 2-foot modification in height for an existing seawall at the administrative level. That was why he had to bring the matter to the commission.

Additionally, this was the first time, to his knowledge, he said, that a project before the commission represented a response to a new section of the county Comprehensive Plan, which underwent a major revision last year. That section deals with development considerations linked to sea level rise. Increasing the height of the Oceane seawall, he noted, “would be consistent with that [policy].”

Merrill explained that the goal with the project is to remove the Oceane condominiums from the FEMA “velocity zone,” in which construction must meet more stringent floodplain standards. The existing wall is 11.5 feet deep, Merrill continued, with 4.7 feet aboveground. The new wall, therefore, would be 6.7 feet aboveground.

Furthermore, both Siesta Towers and Windward Passage went through a process with FEMA to remove their properties from the velocity zone, Merrill told the board. Both concluded those initiatives this summer, he said. They had extra fill on their land because of the nature of their developments, he continued, so they did not need county approval. However, county regulations will not allow CG Oceane to add fill to its property, he said.

It’s the Holidays! Here are the Top Toys for your Canine Companions