Public and developers should work to reach common ground on issues, such as environmental protection, Commissioner Moran tells SKA members 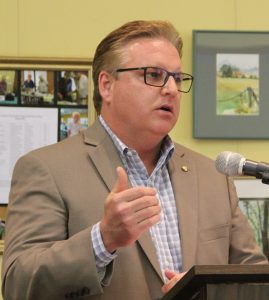 One of Sarasota County’s newest commissioners has encouraged members of the public interested in protecting the environment and promoting positive growth in the community to work with developers to reach common ground.

Commissioner Michael Moran — who was sworn in on Nov. 22, 2016 — told about 80 people during the April 6 Siesta Key Association (SKA) meeting that when he attended a Florida permitting conference a couple of years ago, he saw a presentation that featured “the best minds in the state” talking about innovative practices in development — what he characterized as “fantastic projects.” Moran pointed out that the “common denominator for all of [them] … was an incredibly healthy relationship between the developer community and the environmental community. … There needs to be a good debate to work into the middle on some of these solutions.”

SKA member Margaret Jean Cannon then raised the point of how she watches “old Florida homes torn down” on Siesta Key, to be replaced by three-story structures that can sleep 18 guests at a time. While those new houses are allowed by the county’s zoning code, she said, she still would like to know how she can find out about the site plans before construction begins.

“The constant tension” in that type of scenario, Moran responded, pits infill against “single-subdivision sprawl.” One of “the puzzle pieces” the community needs, he continued, is infill that is well planned. He then noted that county staff and a consulting firm have begun a process to revise the county’s land development and zoning regulations into a Unified Development Code. The goal is to create a new code that will be easy to comprehend and utilize, county staff has explained to the County Commission.

Moran encouraged Cannon to become involved in that process. Nonetheless, he also told her that her expression of her concerns during the SKA meeting was helpful. (This reporter watched Moran taking notes on speakers’ comments.)

Yet another issue raised on April 6 — for which the SKA sought Moran’s assistance — was the planned county decommissioning of the Siesta Key Wastewater Treatment Plant at the end of this year.

SKA Environmental Committee member Robert Luckner told Moran that the project remains on schedule. However, the “key milestone,” Luckner pointed out, will be the cessation of discharge of treated sewage into the Grand Canal, with the sewage flowing instead to the county’s mainland treatment plants.

“It’s a big deal if that slips,” Luckner added of the timeline for the switch.

An agreement the county has executed with the Florida Department of Environmental Protection would allow treatment on the island to continue into the middle of 2018, Luckner noted, but residents will be upset if the Dec. 31 deadline is not met.

(Last year, the SKA hosted two separate presentations by county staff in regard to the project to turn the Siesta Key plant into the site of a master pumping station only.)

“We would appreciate your help,” Luckner told Moran, to ensure no delay occurs.

Another concern of island residents — raised by SKA Director Joe Volpe — involves notices provided to the public about initiatives proposed to the county. Volpe explained that late last year, representatives of Dr. Gary Kompothecras — a Siesta Key resident known for the 1-800-Ask-Gary advertising for his chiropractic clinics — conducted a neighborhood workshop on a proposed county Comprehensive Plan amendment that would make it possible for hotels to be constructed on property zoned Commercial General on the barrier islands.

“The legal notice [about such a meeting] is a little sentence in the newspaper,” Volpe pointed out, “and a lot of people don’t get the newspaper.”

Volpe also noted that Kompothecras’ agents at the workshop did not offer any details about the hotel plan, other than to maintain it would be a boutique structure. It would seem, Volpe said, that when developers seek such changes, county disclosure guidelines should require “clear notice about what they want to do …” Furthermore, he continued, county regulations for legal notices should “come into the real world of iPads and the internet.” At the very least, Volpe said, county staff should make certain neighborhood organizations such as the SKA receive notice of meetings on potential changes in their communities, so those organizations can alert their members to upcoming meetings planned by county staff.

During the April 6 SKA meeting, members — and SKA Vice President Catherine Luckner — did voice disappointment that Moran would offer no comment on his views about the City of Sarasota’s plan to dredge Big Sarasota Pass to renourish about 1.6 miles of South Lido Key Beach.

“It’s a real worry to me and a real concern to all of us,” a woman in the audience told Moran. “It just can’t happen.”

Moran replied simply that he could not respond.

(Luckner pointed out later that the SKA has filed a complaint against the City of Sarasota in the 12th Judicial Circuit Court, but the county is not a party to the suit. Retired County Commissioner Nora Patterson responded that the Office of the County Attorney probably has advised the commissioners not to speak on the issue because any remarks they make could be used against them in future, related litigation.)

Before Moran began his remarks, President Harold Ashby referred the attendees to copies of the April 6 agenda provided for them that afternoon. On the back, a note from SKA Director Gene Kusekoski explained that a Florida Supreme Court ruling several years ago requires county commissioners to refrain from listening to comments — and, especially, offering remarks themselves — on any issues that might or will come before them regarding rezoning matters and other action expected to take place in a public hearing. The only times they can hear discussions on those issues are during formal proceedings, Kusekoski stressed.