Two major Siesta Key crashes occurred within a span of a week in early July — resulting in a severely-injured pedestrian in one incident and the death of a Bradenton motorcyclist in the second crash.

The crashes occurred on July 4 and July 10, respectively, both just after midnight. The Florida Highway Patrol responded to both incidents.

Driver was travelling at “high rate of speed” 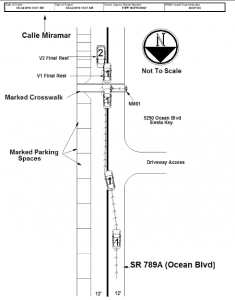 On the night of July 4, at 12:13 a.m., a 28-year-old woman from North Carolina was struck while crossing the crosswalk at 5250 Ocean Boulevard in the Village. Siesta Sand learned of the crash from witnesses who had seen the incident. According to the FHP report, the pedestrian suffered incapacitating injuries at the time of the crash.

According to the report, Christian Allen Lafay, 24, of Lithia, Florida, was driving a 1995 Toyota Camry. Lafay was driving southbound on Ocean Boulevard at “a high rate of speed,” as witnesses reported to FHP. Another vehicle then made a left turn in front of Lafay, and “instead of hitting his brakes,” he “proceeded to go around the vehicle to the left across a double solid yellow line.”

Lafay collided with the pedestrian, who was mid-block in the crosswalk, and also a third vehicle. The pedestrian was transported by Sarasota County EMS to Sarasota Memorial Hospital, before an FHP trooper arrived.

The extent of damage to Lafay’s Camry was disabling and estimated at $7,000, according to the report. The 24-year-old stated he had been drinking, however the trooper gave him a field sobriety test, “which did not demonstrate sufficient clues to justify an arrest.” He was not given an alcohol or drug test at the scene. Lafay was charged with Failure to Use Due Care Toward a Pedestrian.

As of press time, a SMH spokesperson told Siesta Sand the pedestrian was no longer at the hospital, but could not comment on their condition because of patient privacy laws. 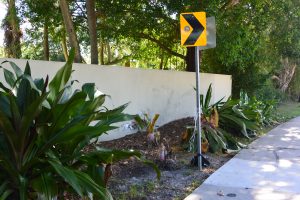 A Bradenton man ran off the road on his motorcycle at 1:08 a.m. Sunday July 10 and died on Siesta Key. Cassidy Manchester, 35, failed to negotiate a curve on Ocean Boulevard, according to the Florida Highway Patrol. Manchester drove a 2004 Suzuki. He was riding north on Ocean Boulevard approaching Ocean Place when he drifted off the roadway for an unknown reason and struck small shrubs and a dividing wall, according to the Florida Highway Patrol’s crash report.

He was pronounced dead at Sarasota Memorial Hospital. Manchester wore a helmet, and an investigation is ongoing.