Responding to residents’ concerns, the Sarasota County Commission voted unanimously on Feb. 27 to prohibit parking along the north side of Old Stickney Point Road from the Midnight Pass Road intersection to 45 feet east of Sabal Drive. 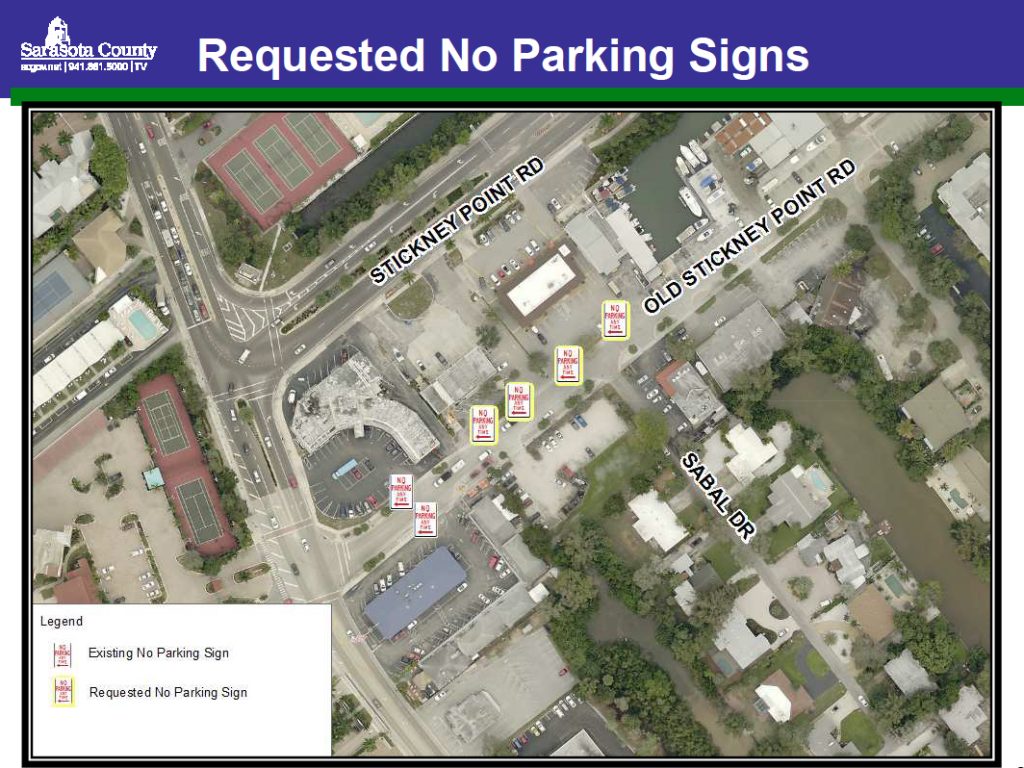 The total distance is 465 feet, according to a staff memo provided to the board.

It should take two to three weeks for the new signage to be installed, county Media Relations Officer Drew Winchester stated after conferring with staff.

Mark Smith, the Siesta architect who is the immediate past chair of the Siesta Key Chamber of Commerce, had created a diagram showing how he believed three spaces could be left on the north side of the road. However, Robert Fakhri, manager of the county’s Traffic Engineering and Operations Division, explained to the board that two fire hydrants are on the affected stretch of road. No parking space may be created within 15 feet on either side of a hydrant, Fakhri told the commissioners on Feb. 27, and a 20-foot separation is required where crosswalks are present. Those are the regulations under Florida law, he pointed out.

Two Siesta business owners — Mason Tush of CB’s Saltwater Outfitters on Stickney Point Road and Russell Matthes of the Daiquiri Deck restaurants — had urged the commissioners to allow the three spaces, but their testimony came before Fakhri provided his analysis of Smith’s diagram.

Tush also was representing the Siesta Chamber as a board member.

“Our No. 1 complaint from our guests is typically parking,” Matthes told the board. “We’ve struggled with that through the years.”

Based on the Daiquiri Deck’s annual gross taxable revenue, he added, one parking space on Siesta Key is worth $50,000. Thus, Smith’s three spaces represented $150,000, Matthes said.

Conversely, two residents of Old Stickney Point Road — including a representative of the neighborhood association that had petitioned for the parking prohibition — pleaded with the commissioners to approve their request. They cited the narrowness of the road and the difficulty an emergency vehicle would have traversing the street, with cars parked on both sides.

Additionally, Dr. Neal Schleifer, speaking for the Paradise Cove Association’s 14 property owners, told the commissioners, “The two fire hydrants are constantly blocked.” Allowing parking on both sides of the road, he stressed, “is a hazardous situation.”

In making the motion to approve the petition, Commissioner Charles Hines referred to Matthes and his

After the hearing, Smith was disappointed by the commission’s decision. During a Feb. 27 telephone interview, he referenced Fakhri’s comments that one of the three potential spaces Smith had identified would be only 8 feet from a crosswalk. After learning about the commission vote, Smith said he went into Siesta Village and began measuring distances from the crosswalks to parking spaces; he found many of spots to be just 8 feet from crosswalks.

“I hope they don’t take our parking away in the Village,” he added of county staff members.

Smith also was surprised, he said, that he had missed the second fire hydrant. “I literally walked up and down the [Old Stickney Point Road] sidewalk with a tape measure,” to be able to prepare the diagram. He went back to the street that evening to verify for himself that the second hydrant was present.

Commissioner Michael Moran told Fakhri during the board discussion that if Fakhri later found Smith’s measurements were correct, “I would like for this to come back to us very quickly.”

Additionally, if there is any way for the county to create more parking spaces on the street, Moran said, “I think it is just good business for us to do this.”

Maio also noted that Spencer Anderson, interim director of the county’s Public Works Department, had informed him that staff was working to obtain the necessary permits so it could demolish the former Sarasota County Sheriff’s Office training facility located on county property at 6647 S. Midnight Pass Road. The commissioners agreed in December 2017 that the public could park in the vacant area that would remain after the building was removed, as well as in the 14 spaces that the Sheriff’s Office had used on the site.

The situation and the request

On Aug. 25, 2017, the Paradise Cove Association filed a request with the county’s Traffic Advisory Council (TAC), formally asking for “No Parking” signs on the north side of Old Stickney Point Road.

That side of the street, the petition pointed out, has “no designated parking spaces,” so vehicles left there essentially reduce Old Stickney Point Road to one-lane traffic. The Sheriff’s Office had stopped issuing tickets to the drivers, the petition continued, because the county never had installed “No Parking” signs on the north side of the street; thus, the Sheriff’s Office had no basis to issue citations.

Old Stickney Point road is a local road with a 60-foot right of way, Fakhri explained. Its lane width varies between 11 feet and 12 feet, and the speed limit is 30 mph. Five-foot-wide sidewalks are on both sides of the street.

Staff concurred with the TAC in recommending approval of the petition, he said, because of concerns that the parking of vehicles on both sides of the street could impede traffic flow, create safety issues, hinder access to private property and have a negative impact on emergency services operations.