The Greatest Generation: Through the Eyes of One Veteran

Ed Brown was born in 1925 and raised in New York City. Upon graduating from Valley Forge Military Academy in 1944, he volunteered for induction into the U.S. Army and eventually was assigned to the 134th Infantry Regiment, 35th Infantry Division in the European Theater of Operations, initially to Patton's Third Army.

Following an abbreviated basic infantry training at Camp Croft, SC, on the day after his 19th birthday, Ed was rushed to Belgium as a much-needed replacement during the Battle of the Bulge. Because of combat injuries the young PFC was awarded two Purple Heart medals.  His stories from that era show his extraordinary ability to cope with difficult situations.

In February, 1945, Ed's unit was part of a major night attack in Germany's Rhineland. The key objective facing his squad of ten men lay across a mile-wide field of snow bisected by a rushing creek.  The squad had been chosen to lead the company, and was provided with a hastily improvised foot bridge consisting of a long plank lashed to two empty oil drums.  Following a massive artillery barrage designed to dislodge the enemy, the squad moved out into the freezing night fully aware of its mission's importance.  However, when they arrived at their bridge site and lowered the front barrel into the water, the force of the stream tore the bridge downstream out of the hands of the GI's, rendering it useless.

Still, their mission remained.  Without a command or even a word, the men marched silently forward and crossed the creek up to their chests in icy water, rifles held high.   Six or seven layers of cotton and wool winter uniforms simply absorbed the water with no opportunity to dry out.  Soaked to the skin and with boots full of water, the mission was accomplished.  "It's what American soldiers do," says Ed. (The event is briefly mentioned in the U.S. Army Official History of WWII.)

During the "Battle of the Ruhr Pocket", Ed made a life-or-death decision concerning a German.  On a night patrol designed to create terror in a nearby enemy unit, he stealthily moved down a street covered with window glass broken by Allied bombers. He was trying hard not to make noise, when he saw a cigarette glowing in the total darkness. When the smoker took another drag, Ed recognized the "coal scuttle" silhouette of a German helmet.  He settled down into a solid firing position and took steady aim. When the German took another puff, it illuminated several red crosses on his uniform.  "GI's do not kill medics", Ed told himself: he lowered his weapon and stole back up the hill to his patrol.  From a nearby building, two stick grenades were hurled at him resulting in a minor wound.

Another time, PFC Ed Brown captured three Nazi officers in the dark of night.  The Americans had taken a German town that still enjoyed electricity. Blacking out the windows of a small house, the squad had settled in for the night.  "It was my turn to guard the front door," says Ed. "Before long, I heard the sound of marching boots approaching where I stood.  Because I could hear them, I knew they had to be the enemy."  (German soldiers were issued boots with hobnails fastening the soles to the uppers, while American combat boots were made with silent, composition soles.) Ed continues:  "I could not let an enemy pass my post, but if I opened fire with my sub machine gun in the dark, I might miss.  In that case, the muzzle flash would surely expose me to their fire.  So, I loudly commanded in their language to whomever was out there, "Halt! Ver ist das?"

Fact was, Ed had never studied German. He had merely picked-up a few phrases from a book he had borrowed on the R.M.S. Queen Elizabeth while crossing the Atlantic.  Meanwhile, his bold command elicited a torrent of replies— none of which he understood except for "Ja!"

"Kommen sie hier” commanded the brash young American—and to his amazement, they did!  He prepared to shoot, but as they neared, the door behind him opened and there stood Ed's sergeant brandishing a lighted floor lamp which blinded the three Germans.  The GI's dragged them inside by their equipment straps, which made them furious!  "We slapped their faces to show who was in charge," Ed recalls.  Later, these prisoners were to provide crucial intelligence information during formal interrogation.

By the time the war in Europe ended, Ed Brown's unit had reached the Elbe River just 35 miles from Berlin, the closest American division to the Nazi capitol.  Besides the two Purple Hearts, Ed was awarded the Combat Infantryman Badge, a Bronze Star and two campaign stars. 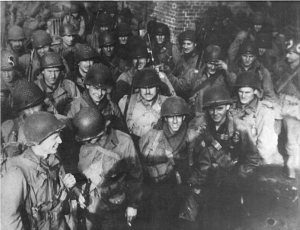 This snapshot shows the 1st Platoon of C Company, 134th Infantry Regiment on March 11, 1945, the morning after a sharp fight with Nazi paratroopers to take Geldern, Germany, a key terrain feature critical to the Rhine River crossing. Hitler had ordered his troops in the vicinity to hold to the death and thus, prevent the Allies from crossing that vital barrier.
The morning weather was pleasant and spring like compared to the severe winter we had just experienced. That may have prompted all the smiles you see. (That or the Lieutenant's order to "Smile".)

The photo was taken by the 1st Platoon leader,1LT John Hein with a captured camera. He was standing on the back of a 2 1/2 ton truck as evidenced by the shadow. I believe he sent the exposed film home and his family had it processed and sent the prints back over. I can't recall whether I was just lucky to get one or enough were made for all. After the war I had mine enlarged and carefully framed.

Although we all knew each other well, I can ID only a few after all these years:

Returned to the U.S., Corporal Ed Brown spent his final time in the Army as a Signal Corps photographer at Ft. Bragg, NC and Ft. Polk, LA.  He went on to earn a degree in Government at William & Mary, and to have a colorful career in advertising.  Ed began it with an entry-level mail room job where he surprised his employers with radio and TV copy they could actually use for Procter & Gamble, their major client.

After several promotions, he worked with Mel Brooks on the “Colgate Comedy Hour’. Then he spent eight months in Hollywood representing Colgate, sponsor of "The Millionaire", a popular TV anthology series aired on CBS.  In 1958, Ed became responsible for a group of shows: "Naked City", ABC; "Wanted Dead or Alive", CBS (Steve McQueen); "The Texan", CBS (Rory Calhoun); and "Wednesday Night Fights", ABC.

When Ed played a key role in purchasing the DesiLu series, "The Texan" for Viceroy Cigarettes, Lucille Ball wanted to meet him.  One of his most delightful memories is when she hosted a party in his honor in Beverly Hills attended by other celebrities as well.

In 1960, when Mohammed Ali returned from the Rome Olympics with the Gold in light heavyweight boxing, he asked ten leading citizens of his home town, Louisville, for backing as a professional.  They turned to Ed for advice.  "What are the young man's chances of success?", they asked.  Ed consulted the Chicago people who controlled the fight business.  The answer was powerfully positive and the rest is history.

Ed's successful advertising career extended past Hollywood and New York into Mexico and Canada.  In 1962, he even seized the opportunity to establish an ad agency in Madrid, Spain, where he was also a principal in starting a large restaurant, "El Brigadier". In addition, Ed advised the Spanish Government on standing up a second TV network as well as freeing the media from the Franco Government's censorship.

In addition to his productive career in advertising, the military remains an integral role in Ed Brown's life. He served for 30 years in the Army Reserve and National Guard, retiring as a full colonel.  Since moving to The Landings in 1989, Ed has been president of Sarasota's Military Officers Association, U.S. Reserve Officers Association and the Humane Society of Sarasota County.  Nowadays, he plays tennis regularly at the Landings Racquet Club.