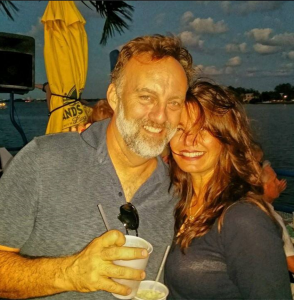 Troy Roberts is the founder/CEO and Head Distiller of Drum Circle Distilling, a Sarasota company which creates handcrafted rums. He entered the field just seven years ago, jumping into the world of rum with the enthusiasm of a pirate.

In his former life in the corporate world —otherwise known as jail— he could only dream of whiling away the hours sitting on the beach waiting for the sun to set, a rum-based drink clutched firmly in his hand. For Troy it felt like the right way to live, for his early years had been spent on the beaches of Sarasota.

He went away from home, as kids so often do, and took a few side trips before his eventual return to Sarasota.  An adventurous soul, he served a stint as a Denver ski bum, and another as a sailor in Santa Cruz.  He even tried the world of frozen yogurt, becoming a store owner in Portland Oregon.

Finally Troy buckled down for ten years of hard work at Compuwear Corporation, where he served as Director of Product Management.  Through all those boxed-in software years he kept dreaming of returning to the beaches of Sarasota, staring at those high-drama sunsets, and sipping one more cup of liquid magic.

Troy bailed out of the corporate rat race in 1999, and started several websites for sports car fans. They were quite successful, and he sold them in 2007 to a bigger company.

He had returned to Sarasota in 2003 to kick off his shoes and walk barefoot once again on the fabled sands of Siesta Key.  Along the way he reconnected with his high school sweetheart, the lovely Nanci Vatovek, to whom he is now engaged. Troy had four boys from a previous marriage, and Nanci had two. These two families were now blended together.

With the sports car websites sold, Troy found himself with time and money on his hands. He had an abundance of energy, and it happened that he liked to bake. Rum cakes were his specialty, and he briefly toyed with the idea of starting a rum cake company.  Rum cakes were soon left behind when Troy zeroed in on making his own rum. Under the banner of Drum Circle Distilling, he purchased a still, and began to experiment with the creation of Siesta Key Rum. The beautiful small-batch still he purchased was custom-designed and crafted, and incorporated an extensive amount of copper. (Copper acts to smooth the rum, removing harsh molecules in the rum vapor before the rum has even left the still.) Avoiding more economical liquid flavorings used by many lower-priced distilleries, Troy made certain only real ingredients were used in Siesta Key rums. The resulting spirits were refined and full-flavored.  He soon was producing what the Miami New Times called: “Probably the tastiest rum in the world.”

Fascinated by the art of making rum, Troy developed all his own recipes for Drum Circle 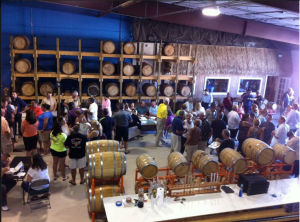 Distilling. He bought only the highest grade ingredients: molasses made from Florida sugarcane, specialty yeast, local honey, real spices and fresh toasted coconut. By 2010, the business had taken off, and he took on two partners, both longtime friends. Tom Clarke had a background in computers, having run the databases for a Paul Allen startup in Seattle. Today he is COO of Drum Circle Distilling, and responsible for administering the business on a day-to-day basis. Ryan Adams was a co-founder of several sports car websites with Troy Roberts in the late 90’s. Today he’s in charge of “Quality Assurance”, which translates to his frequent samplings of Siesta Key Rums.

Two other players serve on the Drum Circle Distilling team. The first is Jim Roberts, Troy’s Dad, who acts as Chief Engineer. He’s known as the man who can build almost anything, including the barrel racks and tasting room.  Jim was a champion formula car racer in his younger years, and an avid cruiser in both sail and motor boats.

The final player is Nanci Vatovec, Troy’s fiancée who helps run the tasting room, labels bottles, creates art, works as a design consultant, walks the beach, cooks, and keeps track of the five energetic sons who still live at home, the youngest in 4th grade. A wedding is planned in March, 2015. 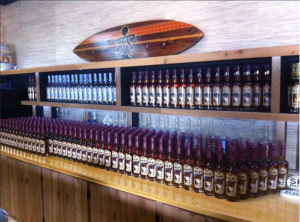 Several different varieties of rum are produced by Drum Circle Distilling: Gold, Silver, and Spiced Rum, and a limited edition Distiller’s Reserve.  All of them are award winners, with Siesta Key Spiced Rum garnering the most prizes.  Cooking Light magazine has called it “Dangerously Drinkable.” Wine Enthusiast magazine awarded it 91 points, and labeled it as “Best Buy.” Garden and Gun magazine called it “as smooth as beach glass.” Caribbean Journal wrote: “The small-batch spiced rum made in Sarasota continues to amaze.”

Siesta Key’s Distiller’s Reserve Solera Blend ages in barrels in a traditional solera method, meaning that the oldest rum is never fully emptied from the barrel. The result is unique special spiced rum best enjoyed neat or on ice, infused with the flavors of spice, cinnamon, pumpkin, nutmeg and caramel.

Siesta Key’s Beer Barrel Finish Spiced Rum is the result of collaborations with craft brewers. Each batch has spent time in barrels that were previously used to age craft beers. Since the barrels are all different, each batch of this rum has its own distinct flavor.

Batch 1 of this Beer Barrel Finish was released in the fall of 2014. The barrels from this first batch came from Cigar City Brewing where they held a Belgian Quad called “Forgotten Island.”

Siesta Key Gold Rum is aged in charred American oak barrels to bring out its wonderful color and vanilla notes. This is a high quality, smooth and flavorful rum which is truly a labor of love.

You can try all these products out at The Drum Circle Distilling Tasting Room and Gift Shop. Located at 2212 Industrial Blvd., it is open several afternoons a week for sampling and tours. www.drumcircledistilling.com