Joe Volpe and his wife, Lana, travel often by car between Michigan and Florida as well as to other 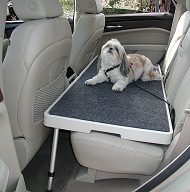 faraway places. They always took their dogs, a Labrador and a Shih Tzu. While driving, Joe was unhappy to find that quick stops would throw these treasured animals into the foot-well area. The Volpes hunted around, but couldn’t find anything in the pet market that would keep their pets comfortable and safe while traveling. Yet there was that backseat sitting vacant 99% of the time. . .

An engineer and inventor, Joe saw this as a problem that needed to be solved.  By 2008 he had created and successfully patented PetDek.

It took three years to obtain both US utility and design patents.  Joe felt certain he would need these patents to defend against China when they eventually tried to knock off his design. The end result was that PetDek became the only patented product on the market designed for carrying pets and cargo in the back seat.

Joe’s aim was to have PetDek made in the US at a competitive price without having to go to China. His goal was also to create American jobs. To accomplish this, manufacturing labor costs had to be kept to a minimum.  Today the product is manufactured and assembled in Iowa, its legs are supplied by Adjust-a-brush in St. Petersburg, Florida, and the carpet comes from Minnesota. The product is also planet-friendly: recycled materials are used in the plastic, carpet, and aluminum legs.

PetDeks have been sold all over the world. They come with a lifetime guarantee.  It is called the “All-In-One Carrier” by SkyMall, who is their major product dealer. Joe has a contract with SkyMall that runs through next summer.1,000 units were sold by SkyMall alone in the first six months, and they have told him it is one of the best-selling products they have ever handled. Their managers feel PetDek will become one of their permanent products. Recently SkyMall received an award for PetDek from USA Today’s 10Best Travel Items. )

Hammacher Schlemmer is also one of Joe’s larger customers, calling the product a “Rear Seat Safety Pet Deck.” Dozens of other catalog companies and dealers throughout the US plus a few in Japan and Central America are now handling Joe’s product, but so far the major pet chains have proved elusive. Friends have been pushing Joe to apply for the television program, Shark Tank, but he’s not certain he wants to do it. He already has a friend and partner who put up most of the original seed money to build the $70,000 mold and pay for inventory. Joe likes to say that money isn’t really a problem as he has his own personal shark. He keeps getting requests to design a larger PetDek for the full-size trucks, and is currently considering that possibility.

Raised in the suburbs of Philadelphia, PA, Joe received a Bachelor of Science in Mechanical engineering from Carnegie Mellon University in 1964. A board member of the Siesta Key Association for several years, Joe has a tendency to take on “engineering” type projects such as getting Siesta Drive redone when it was improperly asphalted with grooves in it, and bringing in radar signs which are now scattered around the island.

Joe and his wife, Lana, lived in Detroit for 40 years, and started coming to Siesta Key in 1969. His sister moved here in 1980, and her sons formed the Video Library rental stores in Sarasota. They sold out to Movie Gallery at the height of the fad. Joe had started a wheel business, and his nephew bought him out. Joe’s son, Joe Jr., became VP of sales.

Daughter Tanya received her B.A. in Psychology and a Masters in accounting, and became a CPA. She is now working on her M.F.A. in poetry and has had several poems published in a number of literary magazines.

Joe says: “My future was preordained by my mother and father who were both mechanically inclined. Like many who grew up in the depression days, they had to quit school in the 8th grade and go to work.  My mother was a welder in WWII. During the war she designed a jig for welding stainless steel that was patented by the company. For that, the only thing she received was a pat on the back. “

Joe’s goal in high school and college was to become a Chrysler engineer in engine development. That goal was attained in 1966 when Chrysler hired Joe to develop Hi-Performance car engines. He was in charge of testing the original 426 Hemi and 440 engines, which put him in charge of working with drag strip professionals such as the Ramchargers, Sox and Martin, and the Golden Commandos. For Joe, it was a dream job. He traveled to the major drag strip events around the country. His work included developing patents on exhaust header systems and intake manifolds. He was indeed his mother’s son!

Joe left Chrysler in 1971 when the government and insurance companies put a stop to Detroit’s involvement with big engine cars. At that time, Lana had a B.S. in biology and was a junior high school science teacher. Together Joe and Lana formed their first company, J-R Engineering Company, a business which they still own. In 1976 they started another business, Detroit Hitch Co., which was set up to distribute RV parts. This too is still in existence. Of course, they needed software to run these businesses, but at the time no software existed for small companies.  In 1977 they formed another business, MV Software Co., a company designed to develop this much-needed software. The Volpes expanded on a small scale and ended up selling business software to companies throughout the US. Joe says, “This wasn’t a fairy tale: there were many bumps in the road. Those 40 years included oil embargoes and recessions in Detroit. Lana and I held it together with the help of many great employees, some of whom have been with us for 30 or more years.”  Today the Volpes are slowly turning the businesses ownership over to these employees via ESOPs.

Joe built his first 14-foot boat from a kit in 1956, and has been involved in boating ever since. Lana has accepted this and they have traveled aboard their latest boat, “Megabyte,” to the Bahamas and other places. For many years it was docked in Ft. Lauderdale where they lived aboard about 80% of the time.  Lana also put up with Joe’s getting a pilot’s license and instrument rating to fly their own plane on trips to Philadelphia, where Joe was born and his parents still lived.  Lana was never in love with flying but learned to tolerate it because it was so important to Joe.  The couple also flew to many other parts of the country.  Of these expeditions, Joe says: “I promised Lana an exciting life when we married, but she probably didn’t plan on it being quite this exciting.”

Today, the Volpes’ rescue Shih Tzu, Charlie, appears in all PetDek ads and also on their website, www.petdek.com. On any given day you may see Charlie in Joe’s bike basket as he pedals around Siesta Key Village. As Joe laughingly tells his friends, “I’m not the sharpest knife in the drawer anymore but at least I’m still in the drawer.”

Indeed—Joe’s right there, front and center!

The Man Who Saved Batman