A Dynasty of Pizza Makers

Philip Solorzano is the owner of Solorzano’s Pizzeria Siesta Key and Solorzano’s Late Night Pizzeria in Gulf Gate. An energetic young guy, he and his brother, Carlos, share a passion for pizza. Their grandfather was a pizza man, and so was their father and most of their uncles and cousins.  Phil shrugs, “It’s just what we do.” Nobody makes pizza like Solorzano’s, and their culinary artistry has been honored by the pros. In 2016, Trip Advisor named Solorzano’s Pizzeria #1 in all of Sarasota County—singled out from more than 50 local pizzerias! 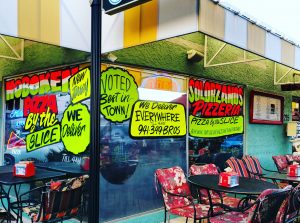 If that’s not enough, Trip Advisor also named Phil’s Gulf Gate location as the #2 restaurant out of ALL restaurants in Sarasota County, including the fanciest ones in town!

Phil’s culinary offerings are both authentic and superb! He doesn’t just make pizza: he also offers classic pasta entrees such as baked stuffed shells and homemade meat lasagna. A display case is filled with cakes, cannolis, and other opulent sweets. Besides soft drinks, wine, beer, espresso, and cappuccino are also on the menu.

Phil was born with a golden pizza cutter clutched in his tiny hand.  His grandfather, Filippo Centrella founded the dynasty when he and his wife, Lina, moved from a small town outside of Naples, Italy, to faraway New Jersey.  They settled in Union City, took over an existing pizzeria named Sole’s, and became immersed in raising four children. Before long, the Centrellas sold that first shop and opened Presto Pizza in West New York.

In 1977, brother Vincienzo took over Presto’s, and Filippo moved on to open a pizzeria on Washington Street in Hoboken, naming it after himself. A young man named Carlos Solorzano joined the team and helped make this first Filippo’s a grand success.

Romance bloomed among the mushrooms and tomatoes. Carlos Solorzano married Franca, the Centrella’s eldest daughter. Before long, sons Philip and Carlos Jr. were ushered into the world.

Franca stayed home with the boys while her husband opened Filippo’s II in 1985 on the very same street in Hoboken as the original, paying homage to her father who had started it all. Before long, Filippo’s III and IV came into being, all owned and operated by Carlos Sr.

By 1995, Carlos Sr. and Franca had sold all three Filippo pizzerias, and focused their efforts on one single business. Their sons were now old enough to help. Together, the family opened Filippo’s Pizza Café at the corner of First Street and Willow Avenue in Hoboken.

In April of 2003, Philip—now a young entrepreneurial pizza man—went on vacation to Sarasota. It was his first visit to our town, and he fell in love with both the area and the people.  He quickly came to the conclusion that Sarasota offered the perfect opportunity to relocate the family business.

Six months later, the entire family escaped the rigors of New Jersey, and moved to Sarasota.  They joined forces to open Solorzano’s Ristorante in Gulf Gate, and today this fine-dining restaurant is still going strong. It stays open four nights a week for dinner only, with Carlos Sr. doing the cooking and Franca serving.

By 2007 the two sons were ready to branch out. Philip was offered a fabulous opportunity to open up his own pizzeria on Siesta Key. He asked his brother Carlos Jr. to join him, and Solorzano Bros. Pizzeria was born. 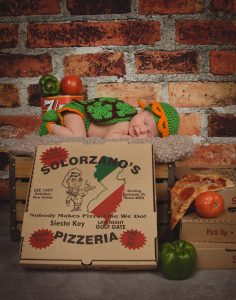 Initially business was slower than hoped because they were located on a side street (215 Avenida Madera) and not on the main drag (Ocean Blvd.) Phil tried distributing handouts on the main drag to draw people to their offbeat location.  “Can’t do that,” said the Sarasota Police. It seems it was illegal to solicit on Siesta Key.

Being an Italian from New Jersey, Phil did not take kindly to the word ‘NO!” He opened a tiny smoke shop on Ocean Blvd. specifically so that someone could legally stand in the doorway and hand out flyers to direct customers to their nearby pizzeria. It worked like a charm, and people came pouring in.  The smoke shop itself turned into a lucrative business. When the landlord demanded a dramatic increase in rent, Phil simply closed the smoke shop. They now had plenty of customers at the pizzeria.

After a few successful years on Siesta Key, the brothers opened yet another place at the corner of Beneva and Webber, calling it Solorzano Bros. Old-Fashioned Pizza. Eventually they decided to divide up the shops in order to focus more time and effort on each location.

Both of Phil’s restaurants seat 30 people in a mix of indoor and outdoor seating. The settings are colorful and charming with excellent air conditioning, big television sets, and a huge collection of recent and historic family photographs.  Included are photos of Phil’s girlfriend and their adorable son, Fillipo, age 9 months. 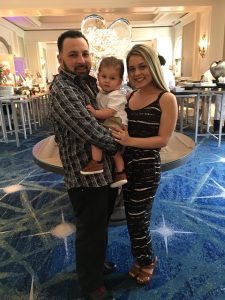 The biggest photo on the wall, however, is a giant blowup of Phil’s grandfather, Fillipo — first in their dynasty of pizza makers. Nearby hangs a sign reading:  MOB PARKING ONLY – ALL OTHER VEHICLES WILL SLEEP WITH THE FISHES.

Both of Phil’s Pizzerias are open 7-days-a-week to 4 a.m., and delivery is offered.   Phil also runs a nearby Hookah Lounge which—in addition to a full bar— serves 80 flavors of tobacco. The setting is pure Miami-Vice, with white leather couches and drapes, and lights which dramatically change the colors of the room.

Woman’s Exchange in time of quandary