The Tale of a Tail: A Mermaid Story 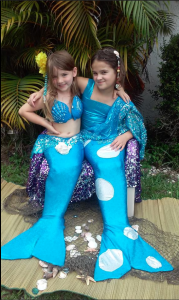 Jayde Morgan is the creator of www.SiestaKeyMermaids.com. Her original inspiration began a year ago, and it came from her daughter, Kaylee, who was fascinated by these undersea creatures.

In 2013, much to the delight of Miss Kaylee, Jayde began trying to create a mermaid costume for the child, who was 5 at the time. It was not easy: Jayde had never sewn anything before. She experimented with a multitude of different fabrics and stitches until finally she got it right.

Jayde took Kaylee and her Mermaid tail to the beach so the little girl could play in shallow water. (Kaylee was not yet a swimmer.) As she frolicked in the foot-deep water, a large crowd of enchanted beach-goers gathered around, asking over and over to take her picture,

Because of the reaction of the crowd, Jayde realized she was on to something. She promptly went home and sewed up a second tail for herself, being “helped” by her then 2-year- old son, Miles, who was a mermaid aficionado. A week or so later, the young mother made her debut as a Mermaid on Siesta Key Beach, where she was an instant success! Child after child kept saying they wanted a tail of their own. Parents kept asking where such a tail might be purchased. It seemed like everyone in Sarasota wanted their very own Mermaid tail! The enthusiastic crowd expressed hope that the lovely mermaid would soon come back to Siesta Key Beach for a return engagement

Jayde thinks of herself as more of an artist, and not so much as a model. She asked a friend, Skye Aiello, if she might be interested in occasionally modeling one of her Mermaid tails. The friend was delighted! Jayde describes the moment: “Skye and I went out to Siesta Key Beach for a couple of hours. Before we knew it, there was a line of people all waiting to be photographed with the Mermaid. Some were even taking videos.” Before long, Jayde had two otherfriends lined up ready to swim into action.

In May of 2014, Jayde put up a web site offering her handmade tails for sale. Tails are also available for rent from this web site, and may be used for photographs and special occasions. (www.siestakeymermaids.com ) The site also offers the services of three amazing Mermaids by the names of Skye, Coral, & Pearl. These lovely fish-tailed ladies can be hired for special events such as birthday parties. (Check out the ‘MORE’ link on the website for photos and prices.) 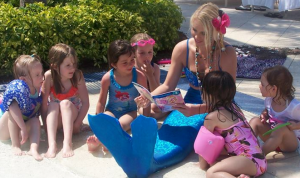 This summer, one or another of the Siesta Key Mermaids has been booked for special events at the Ritz Carlton Beach Club. On such festive occasions, the performing Mermaid entertains children at the pool. She uses Diving Rings, Bubbles and the like to amuse youngsters, and also engages them in games of Marco Polo and Tag. At “Story Time”, the beautiful tailed creature reads the Mermaid Book aloud to the assembled children. At end of party, she gives each wide-eyed youngster a special Mermaid Magic Stone to remember this unique event.

Jayde offers two different types of Mermaid Tails on her website. The first is the standard mermaid monofin, which requires the wearer to be able to do a “dolphin kick.”(When wearing a monofin, both legs are required to move up and down together.)

Jayde also builds a tail that uses two flippers, a system that is easier for a child to master. It works like the tail of a sea lion, where one fin moves up while the other moves down.

Jayde hopes to soon get a store-front in Siesta Key Village. She is currently on a waiting list for one, but nothing suitable is available at the moment. Her website is going 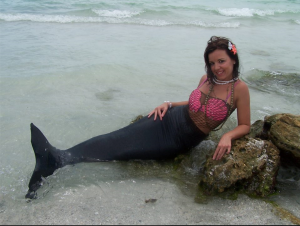 strong, however. There, Jayde sells more Mermaid tails for children than she does for grownups, and her mother stands by to help her with this project. You see, Jayde, is a very busy young lady: she’s a student at the University of South Florida near the airport, where she studies Elementary Education. (Her mom, Donna McGarry, is a 5th grade teacher at Ashton, and was named Ashton’s 2014 TEACHER OF THE YEAR.) 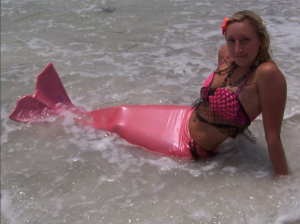 One or another of Jayde’s three live Mermaids frequently appears at Siesta Key Public Beach, with sightings expected on August 3rd and 17th from 11 a.m. to 1 p.m. These beautiful creatures have been known to swim to the north where they sometimes are sighted at Lido Beach. (The Mermaid’s schedule of local appearances can be found on their web site.)

Besides her mom and her children—Kaylee and Miles—Jayde’s family includes her husband, Shaun Morgan, who works for Jeld-Wen Windows & Doors.  Her husband’s mom—Diana Morgan—serves as her event coordinator.  Jayde has two athletic 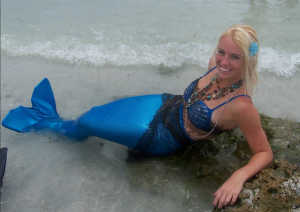 brothers: Seth, who attends Florida Atlantic on a baseball scholarship; and Hunter, who just won the Most Valuable Player & Athlete of the Year Award at Bradenton Christian.

You can now transform yourself into a beautiful Siesta Key Mermaid. Jayde’s tails are made from high quality durable fabric that stretches to form to your body. Each tail is made specifically to fit you, lovingly handcrafted. Each tail contains the fins inside that help you look and swim like a real mermaid. Take your tail to the beach or pool. They are so much fun to swim in!

The Rockin’ World of the Derringers