story and photos by Trebor Britt

Some people just know what they want to be when they grow up.  For Ryan Ballance, it wasn’t quite that simple.  It was during his 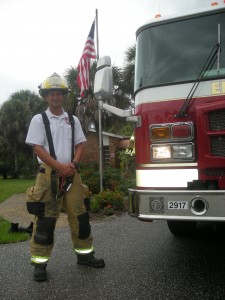 training to become a Santa Barbara County lifeguard in California that he became interested in becoming a firefighter.  Since lifeguards and firefighters train together much of the time, it became a natural fit for him.

Although he set his sights in California, it was a visit to see his sister, who lived in Sarasota, that would tie his career to this area.

Lieutenant Ryan Ballance, nicknamed Ryno, has been serving the Sarasota County community for more than 21 years.  In his dual role as supervisor and team member he currently manages, trains and mentors the men and women firefighters at Firehouse 13 on Siesta Key.  Asked about the #13, he says he is not

superstitious. In fact the number 13 is one of his favorite numbers; it was the number he wore playing water polo in college and has served him well these past years.

The engine at Firehouse 13 is unique because it is an advanced life-support vehicle, designed to maximize a successful rescue operation. It contains all the equipment needed for any possible rescue. The only thing it can’t do is transport a patient.  As a paramedic, Ryan initiates immediate care until a transport vehicle arrives.

Daily life at the Firehouse always includes an in house training event that incorporates both a fire and EMS situation because when each second counts there is no room for error. “Every fire call is dynamic.  No one shift is exactly the same,” says Ballance.  That is why every trai 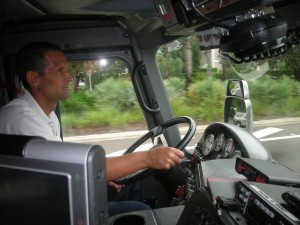 Ryan had a pretty normal childhood. He was born in Wheaton, Illinois on the northwest side of Chicago and at about age 6, he and his family moved to Long Beach, California where he lived through his high school years.  He remembers learning to swim at a very young age and started playing water polo when he was eight. The pool he learned to swim in was the same pool used by the Olympic Water Polo Team. He recalls always looking over and saying, “I want to do that, that looks cool.  He went on to say that, “water polo is so huge in California almost every community has a team.  Every High School has their own pool and team. The rivalries are as intense in water polo there as they are here in football”.  He had the honor of playing on the HS junior national water polo team and eventually played on the National B Team which is just one step below the Olympic team.

After being recruited by several colleges to play water polo, Ryan accepted a scholarship at University of California, Santa Barbara and played all through college.  He was thrilled to play in a tournament last year in Naples, Florida with a bunch of the UC Santa Barbara alumni.  He graduted from UC Santa Barbara with a degree in psychology.

After college graduation in 1988, he and a friend traveled Europe for 3 1/2 months. They went from Norway all the way to Morocco. It was a lifelong dream to travel Europe with back packs by Eurorail. “We wanted to see the world. Seeing all the sights and meeting the locals were definite highlights, but meeting the people was the best part of the trip.”  Ryan laughed as he related, “To handle the language barriers, they did a lot of pointing and spoke slow and deliberate. Like everyone else during those days, they traveled with a translation book. This was long before walkmans and iPhones. Since the trip took place before the end of Communism, they were able to see the Berlin wall.

Ryan’s greatest joy outside the Firehouse is raising his 14-year-old son, McCabe, a high school freshman who attends Outdoor Academy at Lakewood Ranch. He’s playing football so Ryan is involved with mentoring him, making sure he’s ready for the day and that he gets to all practices.  He also does a lot of volunteer work at McCabe’s school.  “I’m very involved in being a father.”

Ryan’s interests and passions include exercising, running, swimming, biking stand up paddling, surfing, and any ocean sports. He loves the outdoors. What he enjoys most has to be open water swimming. He just competed in the annual Tropical Splash 5 km swim and not long ago finished 5th in his age category in the Pan Am Masters Open-Swim Championships.

I asked Ryan what would matter the most to him when he turns 80 years old.  He said, “That my son is happy and he has a wonderful partnership and relationship with his wife and is a wonderful father. I try to be the best dad I can and I hope I leave an impression on him.”

As for Ryan’s co-workers, he gives high praise to the men and women who serve the public at Firehouse 13 on Siesta Key and throughout Sarasota County.  Siesta Key residents can sleep well knowing the Ryno and his highly skilled teams of firefighters and paramedics are on duty 24/7 at Firehouse 13.