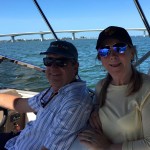 Dan Miller is a realtor who lives on Siesta Key. He didn’t grow up here: he was raised in Chicago. He started coming to Florida in the mid-70’s, after his father moved to Sarasota. Dan attended Northeastern Illinois University where he majored in accounting before going on to become an international bank examiner.

In the 1980’s Dan moved to Sarasota and joined the family business. The Millers owned the chain of MR. FORMAL stores, located all over the State of Florida.  This chain rented formal wear throughout the southeastern United States. The family also owned another closely-related business— a chain of dry cleaners.  Dan and his brother were involved in the businesses until 2002, when they sold the company.

Dan then became a commercial real estate investor who also invested in mortgages. When the real estate downturn occurred, it was inevitable that some properties were returned. Dan seized the opportunity to remarket those properties.

He became a realtor in 2007, first working with Key Realty, and later with Re/Max Tropical Sands. His experience in business, accounting, investing and banking had sharpened his skills, and he became a passionate realtor, especially when it came to properties on Siesta Key and Siesta Key’s Palm Island neighborhood,  where he and his wife have lived since 1991.  Palm Island soon became his territory. In the past five years, he has represented more buyers and sellers on the Island than any other realtor.

The island offers a wide variety of home-style choices. It is filled with a range of architectural styles, some modernist dwellings, others original beach cottages or Florida Ranch homes. A number of properties have been tear-downs, replaced by estate-size, luxury mansions. Dan loves Palm Island for its excellent boating water and for its neighborhood spirit.  It is a well-established community within walking distance of Siesta Village and the beach, but quieter and more secluded. The island is filled with lush, subtropical vegetation, and features mature palms and live oaks, some holding a nest of an Osprey. The Grand Canal marks Palm Island’s northern boundary, and Manatees and small stingrays are sometimes spotted in those waters.

A small lake stands in the center of Palm Island, and the Island boasts of a County Park named after Elsie Blair, one of the neighborhood’s early residents.  About half of the Island’s population is made up of “snowbirds’, many of them retired military or medical or legal professionals. Of late, however, the Island has seen an influx of families with young children.

Dan is considered an expert on selling this remarkable paradise. Having lived on Siesta Key for 30 years, his knowledge of that particular market gives him the ability and insight to answer his client’s every need.

Dan Miller is married to Karen Rose, executive director of Sarasota County Middle Schools.  In their spare time, the couple enjoys activities such as tennis, biking, walking the beach, and spending time on their boat, the “Sea-Esta Slacker.” They are often be seen walking their beautiful Soft Coated Wheaton Terrier, a dog by the name of Ferris who draws attention wherever he goes.

Local, historical art on display at Crossings at Siesta Key

July is Park and Recreation Month, so Sarasota County Parks, Recreation and Natural Resources are planning a celebration on Friday, July 23, at Phillippi Estate Park, 5500 S. Tamiami Tr. The night features games, a movie, and a raffle. At 6:30 p.m., retro games take place including parachute, tug-of-war, hula hoops, and cornhole. At 8:30 […]

Sarasota County turned 100 years old on July 1, and Gecko’s Hospitality Group has teamed up with Big Top Brewing Company for a toast. The brewery has created a limited-edition Centennial Lager, available at two establishments near Siesta Key: Tripletail Seafood & Spirits, located in The Landings at 4910 S. Tamiami Tr., and Gecko’s Grill […]

Next Siesta triathlon is Aug. 1; video of June 27 race

The next triathlon on the Siesta Beach is called the Siesta Sprint, set for Aug. 1. For more information, visit runsignup.com/Race/Events/FL/Sarasota/Siestakeyretrotriathlon. The Sirens and Merman triathlon was held on the Key on June 27, involving a quarter-mile swim in the Gulf, an 11-mile bike ride, and a 3.1-mile run. Here is some footage of participants […]