Real Estate Profile: For Keith Redding, it all started with a vacation

At age 34, Keith Redding is the managing broker at Key Solutions Real Estate, a residential and commercial real estate firm based on Siesta Key that has grown it’s sales volume by about 30 percent every year.

As managing broker, Redding now signs off on about $90 million in residential and commercial sales a year. The company he helped co-found in 2010 also has a property management division.

He is one of the youngest brokers in Sarasota, and for Redding, it all started with a vacation.

In 2004, Keith Redding came down to Siesta Key for vacation, as many residents of northern latitudes do. At the time, the Ohio native was a senior attending Youngstown State. He planned on going into medical sales.

A few months later, Redding had graduated college and sold what few possessions he had. “As soon as I finished school, I was in the car on my way down and never looked back,” Redding told Siesta Sand.

In addition to a new home on Siesta, Redding also found a new career path. He worked shortly for a developer, and decided he wanted to get his real estate license and represent clients. In 2005, Redding got

In 2008, Redding moved to the mainland, but it was his connection to the island he fell in love with in 2004 that eventually led him to co-found Key Solutions Real Estate a few years later.

In 2010, Redding co-founded Key Solutions, with co-founders Susan Saltalamacchia, a retired homebuilder and Brian Tresidder. The timing  — in the midst of the real estate downturn — may not have followed conventional wisdom, but it did correlate with the founders’ faith in a strong local real estate market that would surely rebound.

“A lot of people like myself, are from up North, so there is this huge pipeline [of new property owners] coming down,” Redding told Siesta Sand. They knew Siesta would be one of the areas to lead that rebound.

Saltalamacchia had the initial thought to open the company. “We got together and looking at all the statistics and the economics of the area, it made sense,” Redding said. 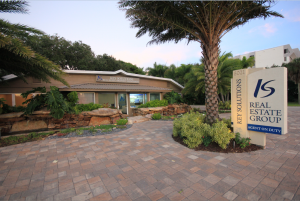 In 2011, Key Solutions purchased and renovated an office on Siesta Key. The building, which was purchased as a foreclosure and was constructed in 1944, “was in dire straights,” before the renovation, Redding said. Now, it features a modern, open lobby and a saltwater fish tank that offers a view into the conference room. There’s a garden space in the back. “We wanted it to be a Siesta Key style office where people can just come in and relax,” Redding said.

Redding is proud of the fact that the company has 100 percent agent retention. “We’ve had some agents move away or leave the industry, but we haven’t had any agents leave to go to another company,” Redding said. He attributes that to a close-knit company and brokers who make sure they are available to help agents day or night.

But Redding says the company’s highest emphasis is on the customer. The boutique firm combines the highest level of customer service with the most cutting 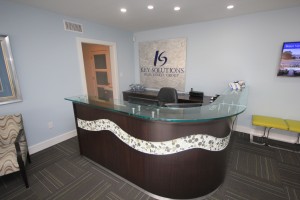 edge technology to ensure they exceed every client's exceptions.  At the beginning of 2014, the company also added a second location in Lakewood Ranch to better serve the clients considering properties on the mainland and east of 75.

In August, 2015, Redding and his wife Cara welcomed their daughter Alivia. He hasn’t sleep since.

“I’ve taken many calls and signed contracts with a baby under one hand,” Redding said. The family is joined by Riley, a two-year-old black lab mix that the family adopted from the Sarasota County Humane Society. 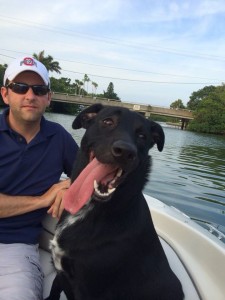 When Redding isn’t working — he’s not sure what “not working” means, he jokes — he enjoys golfing at a variety of local courses. There isn’t much down time, so he also enjoys spending as much time as he can with his daughter and wife, and with friends.

He loves going out to eat on Siesta with his family, and they also enjoy the downtown area and Southside/Hillview area.

Meanwhile, Redding, Saltalamacchia and Tresidder, remain busy as they continue to grow Key Solutions. Despite being a boutique firm they have worked to implement the most cutting edge website and technologies, including a forthcoming technology that will allow people to text for immediate access to listing information.

In addition, “We are in the process of finalizing international real estate affiliations in order to open additional channels of advertising to the European and Asian markets,” Redding said.

Surrounded by water, the Pointe makes an impression