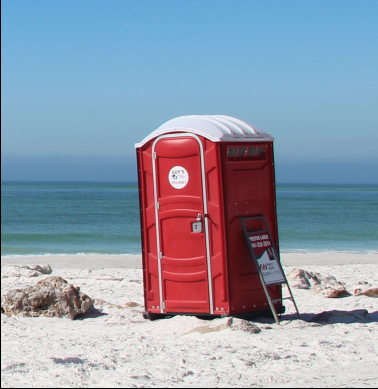 At 9 a.m. on April 13, Siesta resident Mike Cosentino was due in Code Enforcement Special Magistrate Court to respond to Sarasota County’s Affidavit of Violation, issued on Feb. 1, regarding his keeping a portable toilet on his property at 10 Beach Road.

Early on the afternoon of April 11, county Media Relations Officer Drew Winchester said that Cosentino had telephoned staff to say that he had removed the toilet. Thus, staff no longer had need for the Code Enforcement hearing.

The toilet had been on the property since late December 2017.

Howard Berna, the county’s manager of environmental permitting, signed the Affidavit of Violation, which pointed out that the installation of a portable toilet on the beach “in a coastal high hazard area” is inconsistent with the county’s Coastal Setback Code.

Cosentino had failed to place it landward of the county’s Gulf Beach Setback Line by Jan. 31, as Berna had advised him to do, to avoid Code Enforcement action.

Cosentino did not notify the Florida Department of Health in Sarasota County about his removal of the toilet, G. Steve Huard, public information officer for the department, stated in an April 12 telephone interview. Neither Environmental Health Administrator Tom Higginbotham nor anyone on Higginbotham’s team had received information about the action.

On Jan. 22, Higginbotham stated he was working with legal counsel “to determine the best course of action” regarding the portable toilet at 10 Beach Road. Health Department staff, Higginbotham pointed out, had notified Cosentino of Cosentino’s need to apply for a permit for the toilet, which Cosentino had not done.

During an April 12 telephone interview, Cosentino said that he had kept the portable toilet in place to collect a set of data regarding its use. He is commissioning a report on the usage, he said, which he will turn over to Sarasota County environmental staff.

Additionally, “[S]eason is over,” Cosentino noted in a statement he provided via text on April 12.

Moreover, he said during the interview, “It’s tough for me to simultaneously be outside legal limits of the law while I’m complaining about the county breaking the law.”

Cosentino filed a complaint against the county in June 2016, arguing that the County Commission violated the county’s Comprehensive Plan in voting 4-1 in May 2016 to vacate a 357-foot-long segment of North Beach Road that had sustained repeated storm damage over the years.

Each year, Cosentino pointed out, millions of dollars in Sarasota County Tourist Development Tax (TDT), or “bed tax,” revenue is collected by entities on Siesta Key. Yet, the county does not provide restrooms at its beach accesses, only at Siesta Public Beach and Turtle Beach parks.

More than enough TDT revenue is collected, he continued, to pay for portable toilets. Thanks to his keeping such a structure on his 10 Beach Road property, he said, children were spared from stepping in or swimming in human waste.

He wrote in the text that he hoped the data from usage of the toilet “will eventually compel the county to follow my example and provide the very necessary amenities that our locals and visitors deserve.”

When asked on April 12 about the notice he had received from the Florida Department of Health in Sarasota County regarding the toilet, Cosentino responded that Virginia C. Bess, the department’s septic system permitting program coordinator, had written to him early this year to say that he was violating provisions of the state statutes by having the portable toilet on his land.

In a handwritten Feb. 2 response to Bess — a copy of which the Health Department provided — Cosentino wrote, “It is my opinion that the rules cited in your letter are not pertinent or applicable to the current situation.”

He referenced Florida Administrative Code Rule 64E-6.101(7)(b), which contains language regarding “permanent use or placement.” Cosentino continued, “The portable toilet at 10 Beach Road is there for its intended temporary, not permanent use. Such use is clearly allowable without a permit pursuant to [Florida Administrative Code] 64E-6.101(7)(A). Perhaps this was an oversight on your part. I don’t, at this time foresee such use becoming permanent; however, should that change I will certainly do so in compliance with the statutory guidelines pertaining thereto.”

Cosentino further referenced Bess’ comments in her letter regarding “permit and variance application language,” adding, once more, that it “simply doesn’t apply to the current situation.”

Cosentino said he had met with Bess, though he never had had any contact with Higginbotham.

The petitions Cosentino and supporters have been gathering on behalf of Reopen Beach Road would try to revoke the County Commission’s May 2016 vacation of a 357-foot-long segment of North Beach Road and make it impossible, under the aegis of the Charter, for any future board to abandon similar county-owned waterfront property.

Cosentino needs 13,866 valid voter signatures to get the proposed amendments on a ballot.

As for the proposed amendments themselves: The first says the following: “Article III, Section 4.1. Preserve County-Owned Parks, Preserves, Beach and Water Access and Waterfront Vistas. The County shall not sell, and shall retain ownership of, County-owned Parks and Preserves, and shall not vacate or sell County-owned road segments or right of way along or abutting any beach, river, creek, canal, lake, bay, gulf access or waterfront vista. The County shall encourage maximum right of way use for public access and viewing of waterfront vistas. Whenever feasible, the County shall make these areas accessible to mobility impaired persons.”

Sand wars here, but no problems on Anna Maria Island