In its latest responses regarding the proposed Siesta Promenade project, filed with Sarasota County in late March, Benderson Development continues to propose the installation of a traffic signal at the intersection of Stickney Point Road and Avenue B and C. 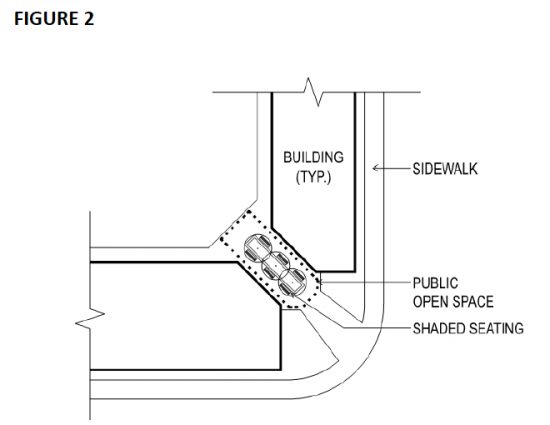 Prepared by the Kimley-Horn and Associates consulting firm in Sarasota, the report notes that it has been updated to reflect comments from the Florida Department of Transportation (FDOT) and Sarasota County staff, including those made during a Jan. 24 meeting.

Additionally, the March report says, as discussed with FDOT and county staff, Benderson proposes “the extension of the existing westbound merge lane to create a continuous westbound right-turn lane” along Stickney Point Road from U.S. 41 to the Avenue B and C intersection.

The latest FDOT discussion about the proposed project took place on Dec. 19, 2017, the report notes, while the most recent discussions with county staff were on Feb. 1. The report points out, “The final access configuration of the project driveways must be approved by [FDOT].”

However, that last statement relates to an issue that has raised questions in recent weeks: The Sarasota County Commission and county staff have talked of progress in ongoing negotiations with FDOT to swap the county’s control of River Road to the state in exchange for the county taking on maintenance of Stickney Point Road and Siesta Drive/Higel Avenue — west of U.S. 41 and Osprey Drive, respectively — as well as Midnight Pass Road on Siesta Key.

Opponents of Siesta Promenade have voiced concerns to The Sarasota News Leader that if Stickney Point Road becomes a county road, FDOT no longer would have any say over traffic pattern adjustments made to accommodate Siesta Promenade — if the County Commission approves the project as proposed.

In response to a News Leader question about those concerns, Paula Wiggins, the county’s transportation planning manager, said in an April 3 email that “if Stickney Point Road becomes a county facility, improvements would be under the county’s jurisdiction. However, if those improvements have impacts to the intersection of US 41/Stickney Point Rd, the state would be able to weigh in.”

The News Leader also posed questions about FDOT’s involvement in the potential traffic pattern changes to Zachary Burch, government affairs and communications manager for FDOT. In an April 4 email, he wrote, “FDOT and Sarasota County have been discussing the possibility of swapping the jurisdiction of a portion River Road for a portion of SR 72 west of US 41. River Road is currently a county maintained road and SR 72 is currently a state maintained roadway. No decisions have been made by FDOT or Sarasota County and the conversations are still ongoing.”

County leaders have been intent on the proposed road swap because of the need to accelerate improvements to River Road, thanks to growing development in North Port; the coming relocation of the Atlanta Braves’ Spring Training operations to a new complex under construction in the West Villages; and heightened concern about the use of River Road as a hurricane evacuation route for South County residents, as well as those in areas of Charlotte County. 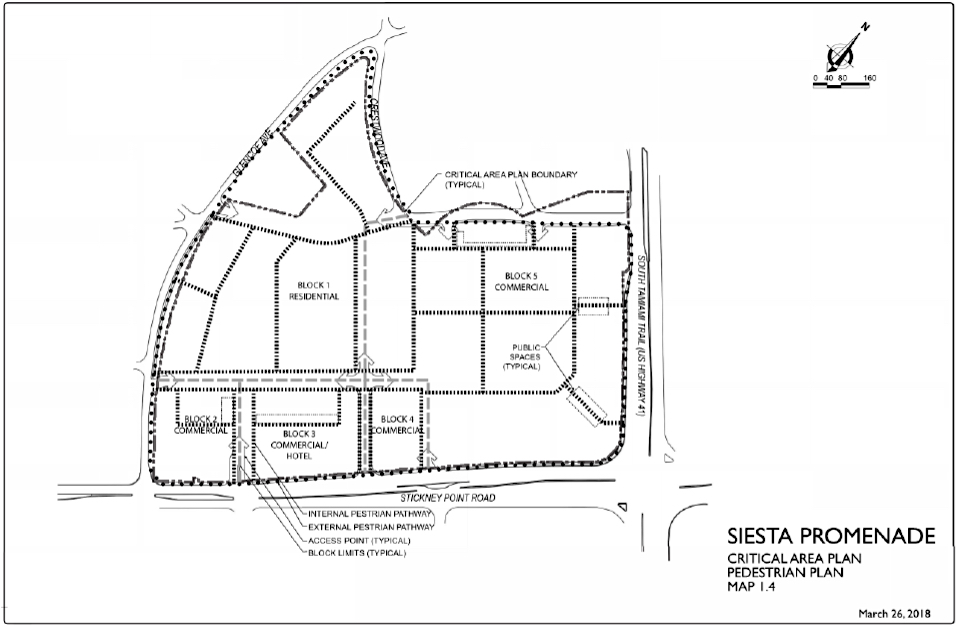 The Kimley-Horn report also continues to include the original figures for residential dwelling units and commercial space in Siesta Promenade, even though Benderson late last year reduced the number of proposed dwelling units from 506 to 414 and the number of planned hotel rooms from 150 to 130. One section of a March 27 letter Todd Mathes, Benderson’s director of development, sent to county Planner Todd Dary says the maximum “total equivalent residential dwelling units” will be 479. The letter also notes that the maximum number of multi-family units will be 414.

Mathes did note that the density total for the hotel used the factors of one dwelling unit per one hotel with two rooms and no kitchens, or one room with one kitchen. The 130 rooms in the hotel would equate to 65 residential dwelling units, a chart showed.

Along with the residential units and hotel, the project would feature 140,000 square feet of “neighborhood retail space,” the Kimley-Horn report says. “Primary access to the site will be provided onto US 41 and [State Road] 72/Stickney Point Road,” the report adds, “with minor site access” provided on Crestwood Avenue and Glencoe Avenue.

Details about the blocks

In his March 27 letter, Mathes also wrote that 133,000 square feet of gross leasable area (GLA) would be dedicated to retail business in the development, with 7,000 GLA designated for office space.

Further, Mathes provided more details about each section planned in the development. For example, in Block 1, the buildings may be 40 feet tall when they are at least 20 feet away from the property line fronting Glencoe Avenue or Crestwood Avenue. They may be 65 feet in height when they are at least 100 feet from the Glencoe or Crestwood property lines.

Block 3, which will comprise retail, restaurant, office and hotel uses, may have buildings 80 feet in height when they are at least 150 feet from the Glencoe Avenue property line.

On Jan. 25, 2017, the County Commission voted 4-1 to allow Benderson to proceed with specific studies in accord with Benderson’s request for a Critical Area Plan designation for the project. Winning approval for that would allow Benderson to have density up to 25 units per acre, instead of the 13 per acre allowed in standard county Commercial General zoning districts.