Almost six years after the former chair of the Republican Party of Sarasota County used her identity to try to smear her reputation, Siesta Key resident Lourdes Ramirez says she has been victimized again.

On Aug. 1, 12th Judicial Circuit Court Judge Andrea McHugh dismissed the last remaining portions of a civil complaint Ramirez filed against her fellow Siesta Key resident Robert Waechter in March 2015. Ramirez took that action in the aftermath of his pleading guilty in December 2013 to using a prepaid credit card to make contributions in her name to Democratic candidates running in 2012 races. Ramirez is a Republican.

Then, on Aug. 2, Morgan Bentley of the Bentley & Bruning firm in Sarasota — who served as Waechter’s attorney in the civil case — filed a motion seeking close to $40,000 in attorneys’ fees and costs.

“So now I’m being victimized again,” Ramirez wrote on the Facebook page for her campaign for the District 4 seat on the Sarasota County Commission. “Where is the justice?” she added.

Ramirez filed the complaint against Waechter after she lost a 2014 campaign for the same seat she is seeking this year. Her opponent in that race — Alan Maio of Nokomis — will face her once more, in the Aug. 28 Republican Primary, as he seeks re-election.

Ramirez and Waechter had served together on the Board of Directors of the Siesta Key Association for more than eight years before she stepped down in 2011 to take on a leadership role with the Sarasota County Council of Neighborhood Associations (CONA).

“I have been victimized every step of the way,” Ramirez said on Aug. 3, referring to Waechter’s admitted criminal actions and the years-long civil case.

On her Facebook page, she wrote, “I respectfully but vehemently disagree” with the court’s dismissal of the complaint.

In her Aug. 1 ruling, McHugh noted that the court — on March 2 — already had dismissed three of the counts in the second amended complaint Ramirez filed in the case, in late August 2016. The remaining counts focused on defamation and libel, McHugh added, and McHugh agreed with Waechter’s argument that the claims were barred by the statute of limitations. Additionally, McHugh wrote that she found no evidence in the case that Waechter’s actions and the resulting news media attention “cost Ramirez any votes” during the 2014 County Commission race. McHugh added that Ramirez’s claims that the identity theft “caused humiliation fall far short of proving damages necessary to support a lawsuit for defamation.”

Therefore, McHugh concluded, Waechter and his company, RWR Installations — which also was a defendant in the case — “are entitled to judgment as a matter of law because [Ramirez] cannot demonstrate actual damages as required.”

In his subsequent motion for fees and costs, Bentley pointed to a September 2017 settlement offer in the amount of $500, which Ramirez did not accept. From that point until the case’s dismissal, Bentley continued, Waechter and RWR Installations had incurred attorneys’ fees in the amount of $34,370.92. The defendants are entitled to recover that as specified by the Florida Statutes and the Florida Rules of Civil Procedure, he added.

An admission of wrongdoing 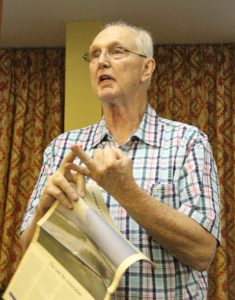 In December 2013, Waechter pleaded guilty to a third-degree felony charge of Making an Election Contribution in the Name of Another and a misdemeanor count of Harassment by Use of Personal Information.

Surveillance video from a grocery store, which the Sarasota County Sheriff’s Office had obtained, showed Waechter purchasing a $500 prepaid credit card, which was proven to have been used to make a $35 donation to a Democratic state House candidate and to give $250 to President Barack Obama’s re-election campaign. Both donations were in Ramirez’s name, the investigation showed.

Waechter was arrested on Dec. 14, 2012, court records show. He originally was charged with a felony count of Criminal Use of Personal Identification Information.

Reading a prepared statement as part of his pleading, Waechter called his actions “a few moments of sophomoric hand-rubbing glee” that had cost him greatly. “I have embarrassed myself and I have caused great embarrassment to my family and friends,” he said.

Waechter was ordered to serve three months of community control, perform 100 hours of community service and pay a $5,000 fine and court costs. He also was given two years of probation.

On March 4, 2015, Ramirez filed the civil complaint against Waechter and RWR Installations Inc., the company whose IP address the Sheriff’s Office connected to the 2012 campaign donations.

“The purpose of the fraudulent campaign contributions was to … paint [Ramirez] as a RINO (Republican in Name Only),” the complaint said.

As months and then years went by, portions of the case were dismissed. Then, late last year, Waechter proposed what Ramirez characterized on her campaign Facebook page on Aug. 3 as a “small settlement.” The offer came with two significant caveats, Ramirez said in a telephone interview. The first specified that she agree never to run again for public office. The second called for her to refrain from any disparagement of Waechter or anyone with whom he is affiliated.

“I could not accept those conditions,” Ramirez said.

Waechter has connections to county commissioners and developers, she pointed out. If she signed the agreement, she said, “I could never speak up on any issue” without fear of reprisal. As a result, she added, the parties went forward with depositions and hearings.