The Pointe is literally on the point — a point of land, that is, surrounded on three sides by water. 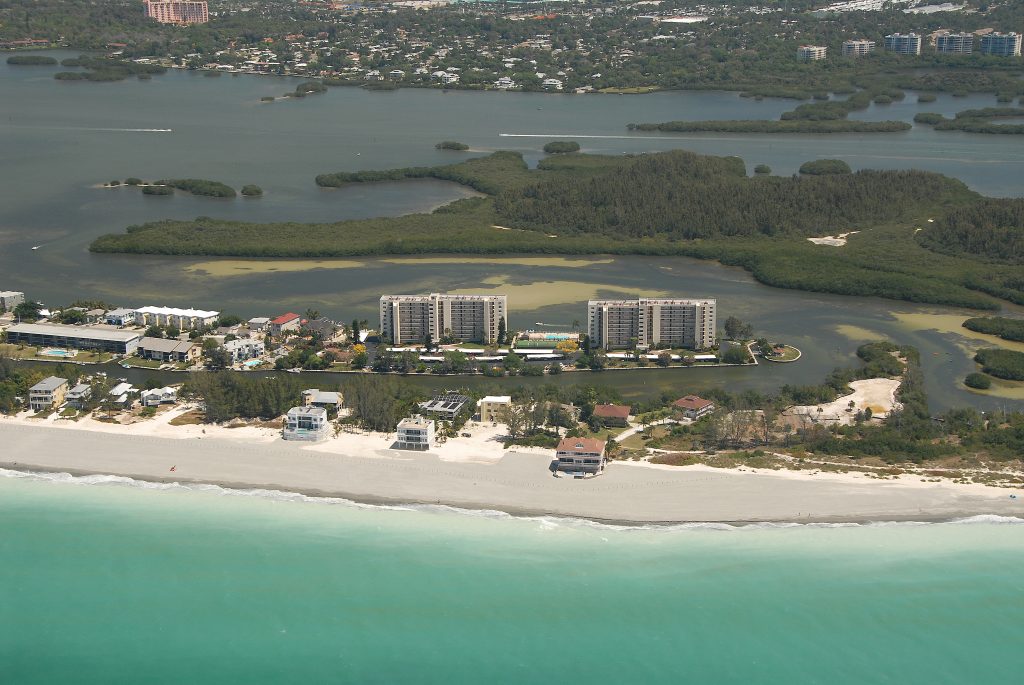 The five-plus acre condo community offers a unique location and for owners provides endless serene views, of both the Intracoastal/Bay and Gulf. Situated on the tranquil southernmost end of the Key, The Pointe is comprised of 122 units in a pair of 10-story buildings. Three different unit models are available: one-bedroom, one-bath units of 778 square feet; two-bedroom, two-bath units of 1028 square feet; and larger two-bedroom, two-bath end units, with added windows and 1380 square feet.

At the back of the building, residents enjoy the Intracoastal/Bay views and sunrises. At the front, views face Gulf-ward with beautiful sunsets.

The Hillerys’ dog, a toy chocolate poodle, loves The Pointe, as well, socializing with owners and other dogs on her walks. Dogs are allowed at The Pointe, with a weight restriction.

In addition to the views, the property was unique among communities the Hillerys looked at back in 2000 when they were seeking a condo unit. “It was a little gem,” Hillery tells Siesta Sand.

“With the location, it is, in a way, an entity to itself. Since we are on the southernmost point, we don’t have neighbors. It is so quiet and tranquil.”

After looking at several condo communities on the Key, which all came with various high noise levels and traffic, “we drove in here, and I just knew this was it,” Hillery recalls.

All units have lanais, which look out over the Intracoastal/Bay views. 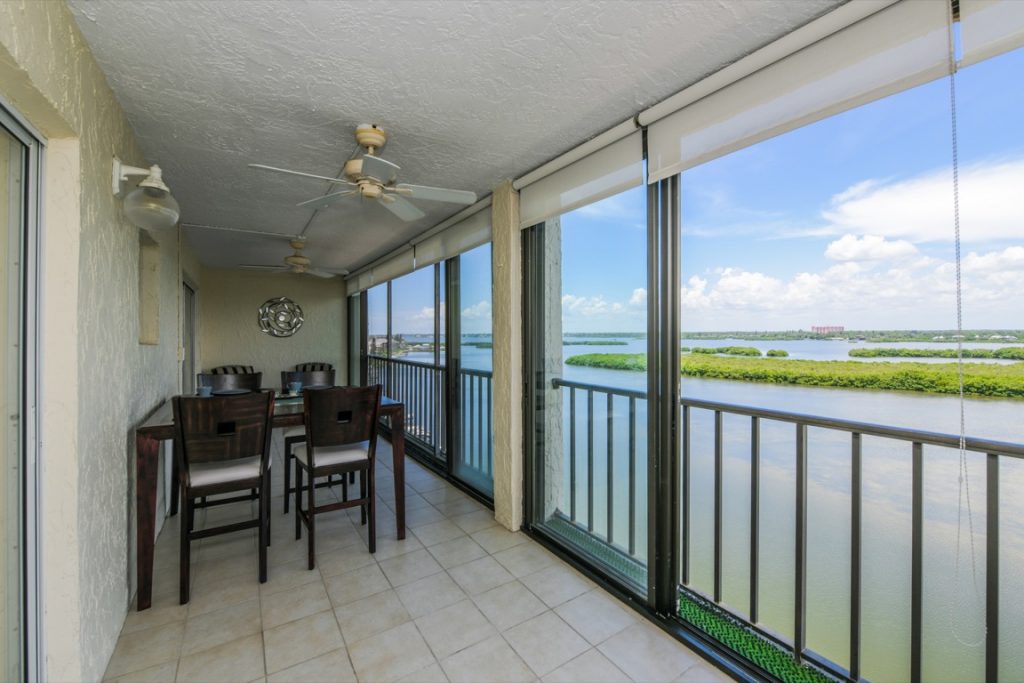 “Most people who buy at The Pointe do so because of the view — perhaps the best on Siesta Key,” says Lasley-Ruiz, of Key Solutions Real Estate, on Siesta.

The Pointe is also a good value for waterfront units on the Key, Lasley-Ruiz adds.

About three years ago sales prices, at The Pointe, were averaging in the mid-$300s per square foot. More recently, average prices fall in the high $300s to mid $400s per square foot. In this price range, “The Pointe is one of the best buys on Siesta,” Lasley-Ruiz says.

Over recent years, many neighbors have upgraded their units. “When we first moved in, very few units were upgraded, but now most (units) have been upgraded in some way,” says Hillery, whose unit features a renovated kitchen and baths.

In addition to the serene views, the community also boasts excellent water access for kayakers and boaters, and other amenities. Nearby Jim Neville Marine Preserve is a protected mangrove island that is home to an abundance of wildlife, including American Bald Eagles, and makes for good birdwatching via kayak. Many owners, Lasley-Ruiz points out, have kayaks, and The Pointe maintains racks and an easy-to-launch ramp for the many residents who maintain kayaks, paddleboards, and/or canoes.

For motor boaters, the community maintains docks equipped with water and electricity. The fishing off the seawall is excellent, and community fish cleaning stations make is easy and convenient to clean your catch, Lasley-Ruiz notes.

Other amenities include: BBQ and Picnic areas, hot tub, sauna and pool, and tennis courts.

And upgrades in the community include: recently renovated fitness rooms in both buildings, including all new equipment; additional kayak racks; new dock; and the seawall and sidewalks that surround the property are in the process of being replaced now.

“That will be very good upgrade once the seawall is replaced,” Hillery says.

According to The Pointe’s website: “When The Pointe was built in the late 1970’s, Siesta Key was still a relatively sleepy barrier island, whose inhabitants included many local fisherman. Midnight Pass was still open to the Gulf and early residents of The Pointe could watch schools of shrimp swim past their lanais. Today they have been replaced by kayakers and paddle boarders enjoying the beautiful mangrove islands of the Neville Marine Park.”

Before the Pointe was built, Mercury Marine maintained a testing facility for their engines — where The Pointe’s gazebo island is today. Across from the condo buildings in Blind Pass, Mote Marine also once studied the behavior of sharks in huge underwater tanks, funded by the U.S. Navy and National Institutes of Health.

Now The Pointe is surrounded by serenity at the very southern tip of Siesta, in close proximity to Turtle Beach Park, and restaurants, to the north and the Neville Preserve to the south. 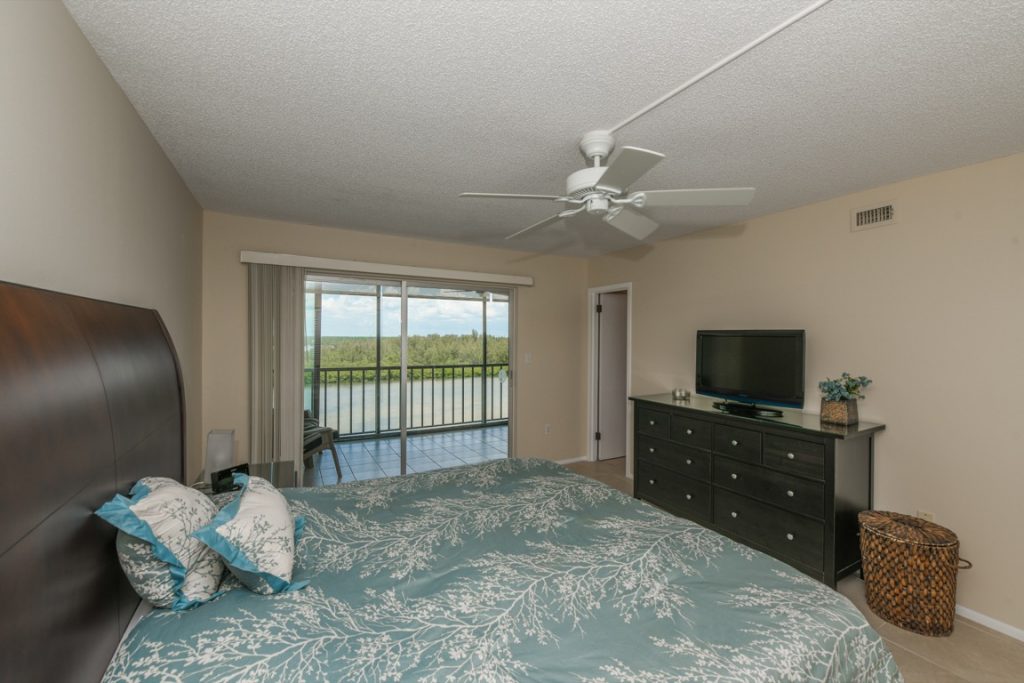 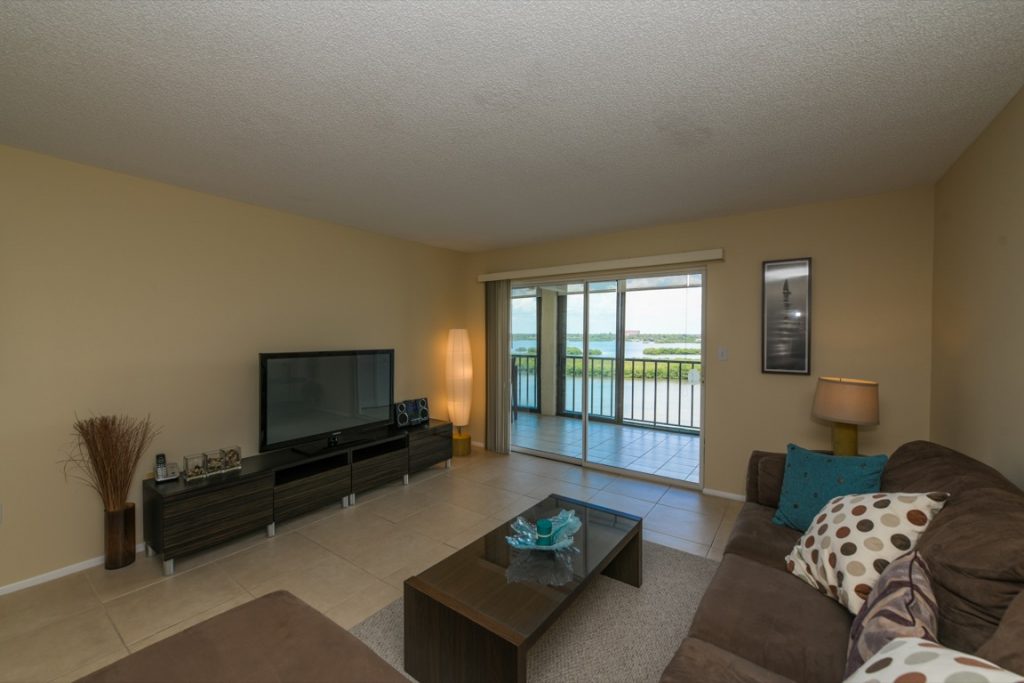 There have been four recent sales at The Pointe, and there are currently five units listed for sale on MLS.