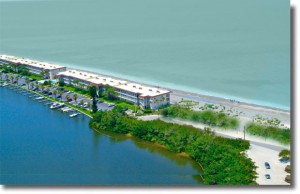 Every one of the 84 units at Fisherman’s Cove has a direct Gulf view. Some renters staying at the complex have even told staff that it is like “staying on a cruise ship” because of the views, said Rhonda Holliday, rental and property manager at Fisherman’s Cove.
“We are sandwiched between water, with the beautiful Gulf of Mexico at the front and relaxing Blind Pass Lagoon at our back,” Holliday said.
The majority of the units feature two-bedrooms and two bathrooms. But there are two three-bedroom units and four one-bedroom units in the community.
Realtor Ron Flynn notes that the unique Gulf and-lagoon-front location on Turtle Beach is what makes this two-building complex stand out on the Key. Nearby is a full service marina, and waterside restaurants.
“Kayaking, fishing, boating, beaching, swimming, shelling, great restaurants, jet ski, it is all here in this wonderful complex,” Flynn told Siesta Sand. “Fabulous Sunset views, and a beautiful resort setting.”
Fisherman’s Cove also has a heated pool and its own boat slips and kayak dock that are both provided for complimentary use for renters.

About 75 percent of unit owners rent their units at least part of the year, Holliday said. The complex’s amenities, strong rental history, and proximity to Gulf and lagoon waters make it a desirable condo location for prospective buyers looking for a condo unit they can rent out. Fisherman’s Cove has a one-week minimum rental policy, which is also conducive to rentals.
“Kayaking and paddle boarding is very popular here at Turtle Beach,” Holliday said. “We have our own kayak dock and are located right next to the boat ramp at Turtle Beach where the kayak and paddle board rental companies will deliver to you the equipment and teach you how to use them. Local companies also deliver bicycles for our guests use.”
“Many visitors kayak to the Jim Neville Preserve and Palmer Point to see the birds, walk, and go shelling,” Holliday added. The dead-end street keeps the traffic light.

“Many guests feel they can unwind here, and Turtle Beach has an ‘old Florida’ feel,” Holliday said. “If you enjoy fishing and boating our location is perfect with the complimentary boat docks when you are our guest and close proximity to Little Sarasota Bay.” Glass enclosed lanais overlook the sand of Turtle Beach. 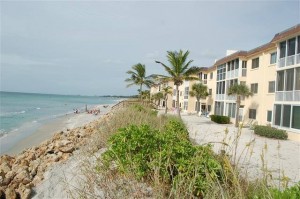 Although that beach shoreline in front of Fisherman’s Cove has eroded, it will be renourished as part of the county’s South Siesta Beach Renourishment Project slated to start by February. “Then there will be more sand to enjoy,” Holiday said. The long-planned renourishment, which includes Turtle Beach, was to start in mid-January. Officials say the work should be completed by April, before the start of the sea turtle nesting season. The project will add 800,000 cubic yards of sand to two miles of beach. It will buffer the eroded shoreline that was initially nourished with a million cubic yards of sand in 2007.
During construction, sand will be harvested from a borrow area eight to ten miles offshore. As of press time, surveying work for the project had already begun.
Flynn noted that once the newly buffered beach is in place, Fisherman’s Cove will be an even-better investment asset at a beautiful setting on Siesta.

Block construction
The property is in great shape and is well maintained, Holliday said. Recently, units received new, upgraded kitchen doors.
The block-constructed buildings were developed in 1968 and 1969. Quarterly HOA fees for the two-bedroom units is $1,754.

Recent sales:
Over the past year six units have sold in Fisherman’s Cove, including one unit that was sold outside of the Multiple Listing Service (MLS).

• Here are the units that were sold on the MLS. All of the recent sales were two bedroom and two bath: 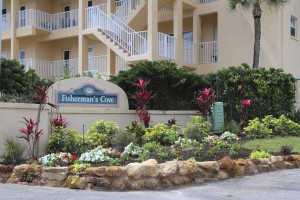