Gulf & Bay Club: a grand property with a grand view
By Roger Drouin 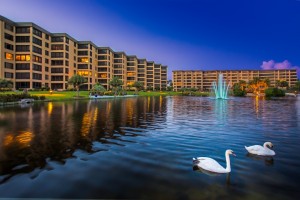 Gulf & Bay Club is an expansive Gulfside resort with more than 780 feet of beach frontage. The resort of 392 condominium units sits on more than 30 acres, a property size that is unique for Siesta Key. “People don’t realize how big our property is,” said Marc Turgeon, sales and rental manager for the community’s realty and rental firm Gulf & Bay Club Realty LLC.

The units range from 1,352 to 2,800 square feet. Every unit has a lanai, some of which have been enclosed to add living space, and every unit has a water view, Turgeon said.

Amenities of the community include: a BBQ island, three heated pools, state-of-the-art fitness center with spa, a large clubhouse with library and computer room, basketball courts, shuffleboard, and racquetball. 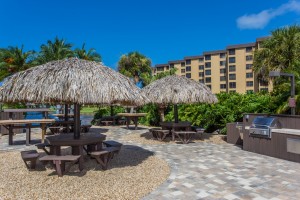 In addition to the BBQ island equipped with gas grills and tiki huts there are at least seven more barbecue areas throughout the community. There are eight tennis courts, including a Har-Tru court, Turgeon said. Owners and guests can even fish in the lakes on the property, but it is Catch and Release.

The greatest amenity, Turgeon said, is the resort’s location. The resort is adjacent to Siesta Key Public Beach. On Feb. 20, the public beach hosted a public grand opening celebration to reveal its fully upgraded visitors’ areas, the culmination of two years of construction and nearly a decade’s worth of planning and consulting on the county project.

“The Gulf & Bay Club is a true Florida resort, nestled right in the heart of Siesta Key, adjacent to the world famous Siesta Key Beach, one of the top ten beaches in the world,” said Ron Flynn, Realtor with Key Solutions Real Estate.

The development was constructed from 1979 to 1983. The six buildings are concrete-block construction with stucco finish, a durable type of construction for a coastal environment.

In addition to the water views, owners and renters alike enjoy the lush, tropical courtyard, which features two fountains and the BBQ island that are lit at night. The courtyard also features three heated swimming pools, and freshwater lagoons with a rustic footbridge meandering onto the unique BBQ island situated in the middle of a lagoon.

Turgeon recalls one couple who have been renting at Gulf & Bay for three decades. “They love that courtyard,” he said. Many units owners, as well, have owned units for 30 years, Turgeon said. Some owners have purchased second or third units even for family members, such as children or grandchildren.“For many renters and owners, their kids and grandkids grew up here,” Turgeon said, noting they would spend each winter or summer on the Key.

Most owners are part-time occupants. “Only about 25 owners live here full time,” Turgeon said. Unit owners hail from all corners of the globe, from Canada to Colombia, Turgeon said. One set of renters, whose main residence is on Park Avenue in New York City, have come down every year for a five-month stay. “They already own two properties and don’t want to own another,” Turgeon said. But the renters look forward to their stay at Gulf & Bay every year.

With the tennis courts, pools, lush courtyard, and other amenities, “there is something for everyone at Gulf & Bay,” Flynn said.

“We have a healthy [fund] reserve,” Turgeon said. Recent complex upgrades include a $2.2 million upgrade to all elevators, and an ongoing project to convert all blacktop to pavers, from the horseshoe road to parking lots. The communities lobby spaces have also been updated. 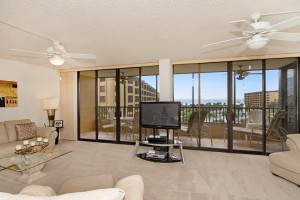 According to Turgeon, there are 11 units currently for sale, including seven listed with Gulf & Bay Club Realty LLC. Eight units are listed through MLS. Over the past year, 11 units sold, ranging from $575,000 to $1.7 million. The sales ranged from $422 a square foot to $644 a square foot.

Here is a sampling of some of the recent sales: 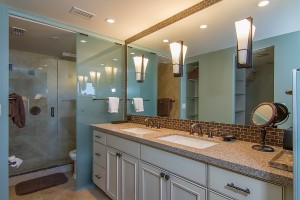 Last month Siesta Sand commented on the need for restrooms in Siesta Key Village for Season. Below is a summarized recap of the commentary with two emails received from readers.