Surrounded by water, the Pointe makes an impression

When John Billowitz visited Siesta Key in the late 1980s, he stayed with a friend who lived at the Pointe on Siesta Key. The five-plus acre condo community, surrounded by water on three sides, made a good first impression. “I thought this was really special,” Billowitz recalls.

Billowitz visited the Key again the next year, in 1989, and him and his wife looked at about a dozen other condominiums for a possible unit to purchase. “We said to the realtor show us something as good as the Pointe that has what the Pointe does, and they couldn’t,” Billowitz told Siesta Sand.

“You can’t beat it,” Billowitz said of the Pointe, where he and his wife end up purchasing a two-bedroom unit in 1989. Then in 2003, they purchased the next-door one-bedroom unit.

The beautiful location and spectacular views is by far the strongest feature of the community, Billowitz said. From the kitchen in his ninth-floor unit, he can look out at both the Gulf and the Intracoastal. 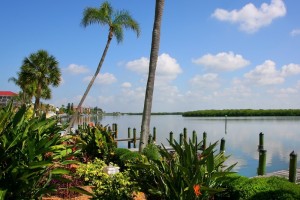 Realtor Sheri Lasley-Ruiz, of Key Solutions Real Estate, said the five-plus acre gated community offers resort-style amenities — including a clubhouse that was renovated in 2012. Other amenities at the Pointe include: a pool and spa, meeting rooms, dock spaces available, kayak racks, and modern gyms.

Lasley-Ruiz, however, agrees with Billowitz that what she calls the “awe-inspiring views” are the greatest draw for prospective owners.

Lasley-Ruiz has a fourth floor unit listed for sale in the Pointe. The unit features two bedrooms and 1,380 square feet. It is listed for $540,000, or $391 a square foot. The unit has a brand new HVAC system that was installed in December, 2015.

“This is one of the larger 2 bedroom 2 bath units at the Pointe with incredible views of both the Gulf and the Intracoastal/Bay,” Lasley-Ruiz told Siesta Sand. “An end unit with abundant windows and ceiling fans, it is light, bright and airy. The open floor plan has been nicely updated to include wood cabinets with solid surface countertops in the open kitchen and baths, and tile flooring throughout.”

According to the Pointe’s website: “When the Pointe was built in the late 1970’s, Siesta Key was still a relatively sleepy barrier island, whose inhabitants included many local fisherman. Midnight Pass was still open to the Gulf and early residents of the Pointe could watch schools of shrimp swim past their lanais. Today they have been replaced by kayakers and paddle boarders enjoying the beautiful mangrove islands of the Neville Marine Park.”

Before the Pointe was built, Mercury Marine maintained a testing facility for their engines — where the Pointe’s gazebo island is today. Across from the condo buildings in Blind Pass, Mote Marine also once studied the behavior of sharks in huge underwater tanks, funded by the U.S. Navy and National Institutes of Health.

Now the Pointe is surrounded by serenity at the very southern tip of Siesta, in close proximity to Turtle Beach Park to the north and the Jim Neville Marine Preserve to the south. “You can’t beat it,” Billowitz said of the locale. “Maybe we are biased.” 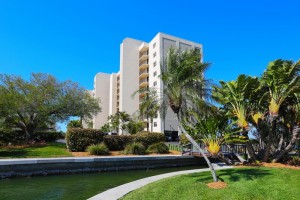 The county’s renouishment of Turtle Beach is underway, and the county plans to begin an improvement project at Turtle Beach Park starting sometime in April.

“Turtle Beach is less than a 10 minute walk from The Pointe,” said Lasley-Ruiz. “The beach renourishment and proposed improvements will no doubt enhance the attractiveness of the community.”

“I have been told we have the second largest swimming pool on the island, and it is heated,” Billowitz said. “It is right on the water on the east side [of the property].”

The community also has three grilling areas. The Pointe is a dog friendly community as well, Billowitz noted.

The property has a strong reserve fund and a history of keeping up on maintenance projects, Billowitz said. The clubhouse was remodeled in 2012 and the roofs were re-done about 10 years ago. The elevators were upgraded recently. “We don’t wait to paint the building until the paint is chipping,” Billowitz said.

Four units at the Pointe were actively listed for sale, as of press time. 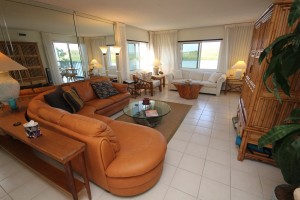 • Another current listing features two bedrooms and 1,331 square feet under air conditioning. It is listed for $495,000, a recent price decrease. The listing price, as of press time, comes out to $372 a square foot. The eighth-floor unit has Gulf and Intracoastal views from every room, according to MLS. This unit also has an updated kitchen with breakfast bar overlooking the living room/dining area and lanai.

• Another renovated, two bedroom unit sold for $509,000 in June, 2014.  It is located on the sixth floor and has 1,029 square feet. The sale came out to $495 a square foot. According to MLS, “This 6th floor unit has been beautifully renovated to include lustrous marble flooring throughout, solid-wood cabinets with granite countertops and stainless appliances in the open kitchen, and newly tiled baths with vessel sink vanities.” 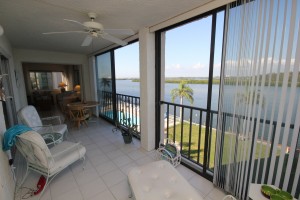 • A one-bedroom, 1,026 square feet unit on the forth floor sold for $299,000 in October, 2014, or $291 a square foot. According to MLS, “This partially remodeled condo features tile floors, a completely remodeled master bathroom, walk-in closet, enclosed Florida room, stainless appliances, and in-unit washer/dryer.”

Real Estate Profile: For Keith Redding, it all started with a vacation

Gillespie was the town of Sarasota’s first mayor