New construction just off the Key

When Lou Cerchio and his wife purchased their villa in Esplanade by Siesta in May, 2015, it was after an exhaustive search. 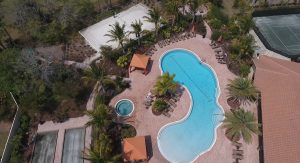 Cerchio initially was looking at condos on Siesta Key, including Peppertree Bay, where they could stroll to the beach. But the Esplanade villa offered upwards of six-hundred square feet more space than many of the island units they were looking at. The Esplanade also offered full amenities, no mortgage requirement for flood insurance, and two entrances with easy access both via Stickney Point to the Key and from Constitution Boulevard into town. Although now they can’t walk to the beach, the couple enjoys the quiet and ease of the Esplanade. “The Key has many benefits, for sure,” Cerchio told Siesta Sand. “But when you want to get off the Key when everyone else wants to get off, it can be rough. So we decided this was better for us. We get more breathing room.”

The Cerchios three-bedroom villa has approximately 1,900 square feet, high ceilings, and a covered lanai that looks out on to a pond that’s home to turtles and birds. The villa was almost-new construction.

Esplanade by Siesta is a newly-constructed community with maintenance-free villas and single-family homes. The last home built was finished at the end of 2016 and was just sold.

Realtor Bob Ruiz, of Key Solutions Real Estate, notes that the community has attracted quite a few residents who have relocated from Siesta or were looking at properties on the Key. “New Construction on Siesta Key would be close to double the price of properties at Esplanade,” Ruiz said. “In addition, insurance costs off the island at Esplanade are very reasonable, due to the new construction, gated security and less of a flood zone [than Siesta Key]. We know several Siesta Key people who we have represented and have purchased both homes and villas at Esplanade.”

Located approximately one-third of a mile east of 41 on the east side of Stickney Point Road, this gated community has it all, Ruiz said.  Built by Taylor Morrison, the community includes both villas and single-family homes.  Quality construction with high end finishes, all units include 2 car garages, Ruiz notes. And resort style amenities include a beautifully appointed clubhouse, with a fitness center, gathering room, catering kitchen and library.  Dogs are welcome in this family friendly community. 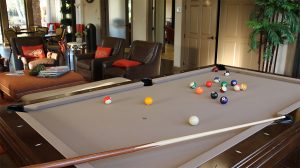 As part of Taylor Morrison’s signature brand of Esplanade properties, the community offers residents a variety of resort-style amenities as well as a full-time Lifestyle Director.

The property was owned by the Wilson family, which has a rich history, according to Taylor Morrison’s website:

"The Wilson family originally settled in the region in 1877 when Gus Wilson moved to Miakka to become the area’s postmaster, Indian agent and state legislature. His son Cullen Bryant Wilson became a prominent physician, served as president of First Trust Company of Sarasota and was a founding member of Sarasota Memorial Hospital. His widow purchased the now-Esplanade property in 1945. It had been used during WWII as a training survival camp for military pilots, but Mrs. Wilson turned it into a hobby ranch and named the lake “Lake Frances” after her own first name. Their son, Clyde H. Wilson Sr., built a home on the property and lived there until his death in 1994. Over the years, the shores of Lake Frances were used by countless civic, charitable, business and professional groups for picnics and gatherings. Taylor Morrison acquired the property in 2006 and broke ground on Esplanade by Siesta Key in 2013.”

The villas generally list for approximately $75 per square foot less then the single family homes, Ruiz said. This is for the reason that there is no shared wall with a single-family home, and they also tend to add 300 to 800 square feet over a villa.

• There are currently three properties for sale in Esplanade.

Ruiz, of Key Solutions Real Estate, has a single-family home built in 2013 listed for $689,900. The two-bedroom, two-bath home has 1,914 square feet, and is listed at $360 a square foot. Some features include: Gourmet Kitchen with desk area and plenty of cabinets, large Master and guest bedrooms plus den, and 8' interior doors throughout (see accompanying photos of this home). Master and Great Room have tray ceilings. According to MLS listing information, recent upgrades also include a screened front entry, crown molding as well as chair rail/bead board in the entry and great room. The closets have all been customized and the garage floor has been finished with upgraded coating. The home is a short walk to the clubhouse and pool, and has a comfortable extended outdoor living space with a new outdoor kitchen and fireplace.

A 1,639-square foot villa is also listed for sale for $445,000, or $271 a square foot. This villa is being marketed as a perfect full time residence or vacation home. It has pond views, and an upgraded kitchen with granite and stainless appliances.