Sarasota County staff members work to lead by example and to educate the public about measures that will reduce the amount of pollutants entering coastal waters, three county representatives told about 50 members of the Siesta Key Association on Dec. 6. 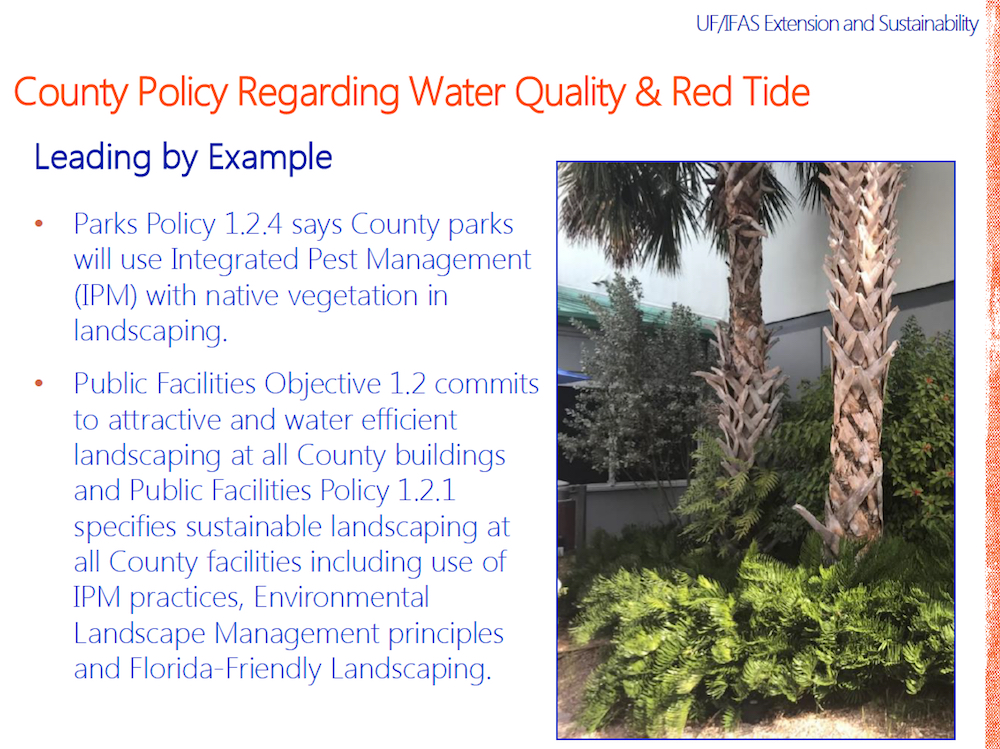 Yet, while the county’s Fertilizer and Landscape Management Ordinance is more restrictive than the comparable state law, David Pousso, senior environmental specialist, explained that staff cannot take certain steps, such as telling retailers not to sell fertilizers during the rainy season. The Office of the County Attorney has warned, Pousso said, that such action would be considered an infringement on commerce.

Nonetheless, Pousso pointed out, “We respond to thousands of citizen calls every year” regarding people using fertilizer between June 1 and Sept. 30, when the county ordinance does not allow that. “Actually, you guys are an asset to us.”

Likewise, he said, employees of professional landscaping companies will report people working for other companies when they violate the ordinance. Staff sends out a Code Enforcement officer to respond to all such calls, Pousso added.

In response to a question, Pousso said that staff has tried educating managers of stores about the ordinance, “but they weren’t too keen on us being there.”

He also pointed out that because the county’s fertilizer ordinance was adopted before a similar state law went into effect in 2009, the county cannot add more prohibitive measures to the local ordinance. If it tried to do so, he told the audience, it would risk state action to pre-empt the county regulations.

Additionally, he continued, the county cannot regulate pest control, because Florida law makes it clear that such action is a state responsibility only.

The focus of the Dec. 6 discussion at the Siesta Key Association (SKA) meeting was on measures that can mitigate red tide. 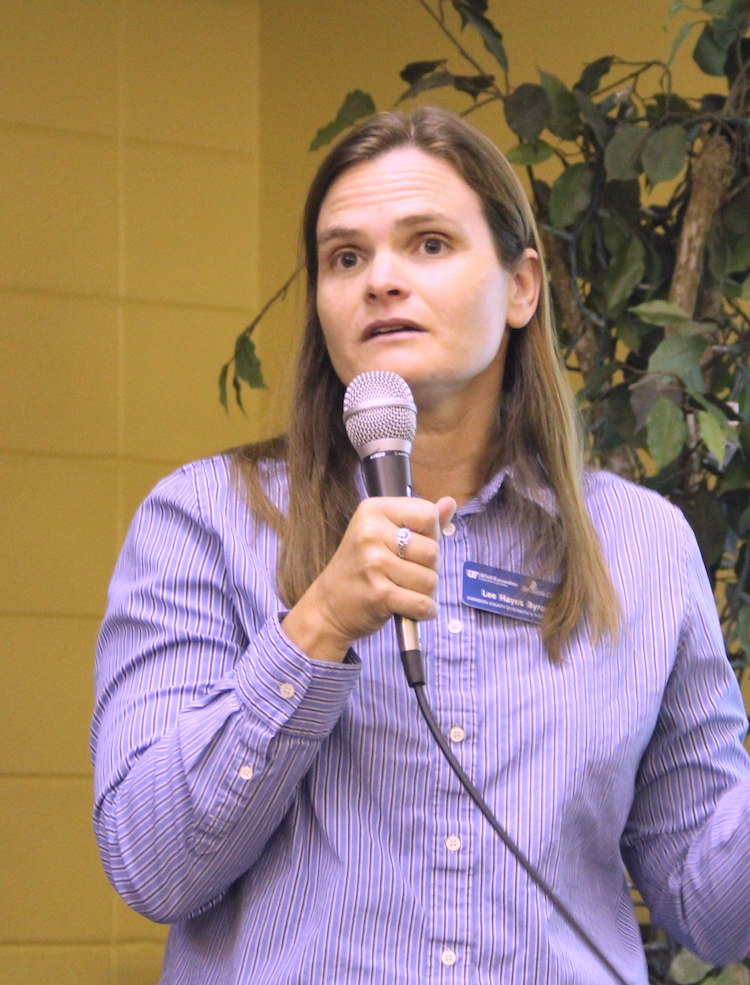 Pousso; Lee Hayes Byron, director of the University of Florida Institute of Food and Agricultural Sciences (UF/IFAS) in Sarasota County; and Armando Ubeda, the county’s Sea Grant agent, all emphasized that the algae that causes red tide, Karenia brevis, thrives on chemicals — especially nitrogen — that the public uses and which end up in waterways.

In fact, Pousso pointed out, the County Code also prohibits the depositing of grass clippings and other vegetative debris onto roads and into stormwater conveyances, such as ditches. “This is one thing that a lot of people don’t realize,” he said. When such matter has been introduced into the system, the first big rain of the summer — what is called the “first flush,” he noted — sends all that debris into the waterways. Decaying leaves and acorns, for example, he said, raise the level of nutrients for red tide.

If a neighbor is blowing leaves onto the road, Pousso told the audience, “Give us a call.”

Pousso and Byron also talked about the county’s certification program for commercial fertilizer applicators. Everyone who completes the training gets a decal from the county to place on his or her truck. If someone sees a commercial company employee working in a neighborhood, and that decal is not visible on the person’s truck or other equipment, Pousso asked that the public also call the county.

Byron also stressed that homeowners should not be shy about asking the lawn maintenance workers they employee if those workers are using fertilizers during the rainy season, in contravention of the county ordinance. “Challenge them.”

Since 2006, Byron said, 2,445 landscape professionals in the community have become certified through the county program.

At the same time, she noted, directors of homeowners associations and condominium associations

should verify that lawn maintenance companies they employ are abiding by Florida-friendly practices outlined in county ordinances.

Ubeda pointed out that Karenia brevis has been proven to be “very opportunistic” in its feeding. For example, he continued, when its cells clog the gills of fish, and the fish die, the algae then thrives off the decaying matter.

The tail of the organism allows it to move vertically in the water column, he explained, which also makes it easier for the dinoflagellate to find food. He likened that action to the movements of sunflowers to follow the sun.

SKA Vice President Catherine Luckner introduced the three county speakers, pointing out that the SKA has been trying to provide its members as much information as possible over the past few months, so they will be knowledgeable about red tide and able to pursue action to mitigate the current bloom.

Ubeda of Sea Grant explained that currents in the Gulf of Mexico and the wind have bearing on the movement of the bloom, which typically originates from 10 to 40 miles offshore.

Karenia brevis is a photosynthetic organism, he added, meaning it needs sunlight to thrive.

While the perception is that the current bloom is one of the most enduring in recent history, Ubeda said, that is not the case. The longest one documented in the past 65 years, he continued, occurred over 30 months, from 1994 to 1997. Another one lasted 21 months, from 2002 to 2004.

During Pousso’s part of the presentation, he talked about policies in the county’s Comprehensive Plan related to sustainable landscaping for the public and private sectors. For example, Environmental Policy 5.1.3 says the county shall recommend Florida-Friendly Landscaping in new developments and provide educational materials to developers and homeowners.

As for septic tanks: Pousso explained that inspections are not mandatory.

Byron, the UF/IFAS director, said that although the state briefly had a law in place several years ago that called for septic tank inspections, the law was overturned.

She reported in a follow-up email, “While septic tank inspections are not mandatory in the state regulations, local governments can adopt rules more stringent than the current state requirements.”

Byron also told the SKA audience that the county has replaced about 10,000 septic systems in the Phillippi Creek watershed over the past 15 years, representing about 68% of the total number targeted. About 3,000 systems are left to be converted in that watershed, she added.

Letters to the Editor